As host T.J. Lavin tells it, The Challenge is a reality TV juggernaut like no other. When it came time for former castmates of Survivor, Big Brother, The Amazing Race and Love Island to step into the Arena, some of them just weren’t ready for the madness to come.

“[Some players] had a little grit and could dig down and find that other gear,” Lavin tells TVLine. “But a couple of the guys, especially in this season, were having such a hard time. They were not ready for what it takes to be a challenger and it showed.”

The Challenge: USA (which premieres Wednesday, July 6 at 9:30/8:30c on CBS) will only feature cast members from the aforementioned series (meet the entire cast here), as they fight, scratch and claw their way to the $500,000 grand prize. Lavin, who was initially best known for being a BMX pro rider, has been hosting the series since 2005’s The Real World/Road Rules Challenge: The Gauntlet 2. Now, he’s back for his 32nd (!) season to pit this batch of newbies up against gnarly stunts, high-speed chases and torturous challenges that have been known to take out even the biggest and baddest of the show’s Goliaths.

Below, Lavin details what’s to come in The Challenge: USA, provides an update on the All Stars series and gives kudos to some of the series’ past legends.

TVLINE | Between the main franchise, All Stars and now this USA season, you’ve been busy! What is it about The Challenge that keeps you so invested?
T.J. LAVIN | I just love it. It’s getting cooler and cooler, and better and better every single year, and every single time we come out. It’s amazing. So until that day comes where I’m like, “Eh, I’m over it,” I’m just gonna keep on going, man. Keep on truckin’. I love it. 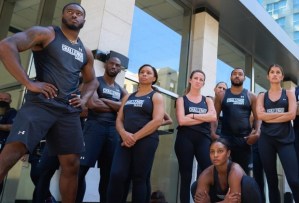 TVLINE | What were your first thoughts when you heard CBS wanted its own version of The Challenge, and were you surprised that none of the franchise vets was invited to this iteration?
At first I was surprised, for sure, but then I kind of got it. I understood. It’s like, “the rising tide floats all boats,” right? That’s when I was kind of like, “You know what? That’s actually really cool. Let’s do it. Let’s bring some more people in.” You never know where we’re going to find another challenger or 10, you know?

TVLINE | Do you watch Survivor, Big Brother or any of these CBS shows, and did you know of any of this new cast before filming?
No, they were all new to me, so it was awesome. I love being surprised. It was really fun. I don’t watch too much TV, to be honest. I only have so many hours in the day and I have FOMO, a really big fear of missing out. So I’m always playing guitar or doing something. If the TV’s on, it’s just background noise.

TVLINE | Once filming had begun, who impressed you most right out of the gate? And was this cast really prepared for the insanity of The Challenge?
I think in some cases they were. The Tysons, Bens and Angelas of the world were awesome. Alyssa, too. There were a couple of amazing players, and then there were some that were not so good. [A few of them] bit off a lot more than they could chew.

These people are very cool, very nice and very sweet as a whole. And they’re beautiful people, too. It’s a very good looking cast and everybody’s awesome. But the level of grit you need for The Challenge is a lot different. In most cases, they had a little grit and could dig down and find that other gear. But a couple of the guys, especially in this season, were having such a hard time. They were not ready for what it takes to be a challenger, and it showed.

TVLINE | How would you rate the difficulty of this season from 1-10, with 10 being the most extreme Challenge ever?
It depends. If we’re talking about the final challenge, then I’d say it’s up there, man. I’m a tough judge, so it’s probably like a good eight on the scale. It was tough! There was only one final challenge, so it wasn’t like a five-day affair or something, where a Survivor cast member would have an elite advantage. But at the same time, they have that gear they can put it in when they need to step it up that much more before quitting. Like, “OK, I’m just gonna go harder.” That’s something that you need to have on The Challenge. 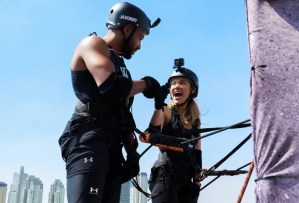 TVLINE | And players need mental fortitude as well! Who on this season is someone to look out for in terms of the mental/stratgic game?
Well, you know Tyson. He’s a mental mastermind in this stuff. If you win Survivor, you have to be really good at mental warfare. Any of the Survivor players who have won, you would think they’d be the ones to watch out for. Not only can they put it in gear, but they know what it takes to get to where they’ve got to go.

TVLINE | Do you think the Survivor alumni have an edge on someone, say, from Love Island?
I really do. I really do. Flirting can only get you so far. As far as The Amazing Race, I’m not sure, they’re not even allowed to drive here [on The Challenge], so I’m not sure about that one. And Big Brother, you definitely have to have skills of living with people and the politicking, so that can help a little bit. The Big Brother people might have a little advantage in that. They know how to live with people and keep their relationships strong.

TVLINE | It’s worth noting that Big Brother players have been a force on the MTV series!
Exactly! You see somebody like Kaycee come in and she kills it.

TVLINE | If you could have added anyone from All Stars or the main show to this CBS cast, who would you have chosen?
I would love to see Darrell [Taylor]. I think Darrell would be fun. You know, if you wanted to stick with the Big Brother thing, we could get Kaycee in there. That’d be awesome. She’s really good and would dominate, but putting in a vet like Kaycee’s not going to be fair to somebody who’s brand new. At this point, she’s done a few seasons now and she’s really good. It would be hard to compete with her if you’re somebody that’s new coming in because you have no idea what’s about to go down.

TVLINE | While I have you, is there any word on the future of The Challenge: All Stars?
I believe that we’re going to film some more All Stars next year.

TVLINE | Have you enjoyed welcoming some old faces back to the fold, like Tina Barta, Derrick Kosinski, Nehemiah Clark, etc.?
It’s so fun! Mark Long really put this thing together at the very beginning, and he was the one fighting for it so hard. It ended up being so awesome, and I love it! I have such a good time. 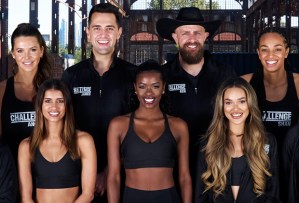 TVLINE | Are there any All Stars cast members you’d like to see return to the MTV shows?
Darrell would be awesome. Mark would be fun! He’d be cool to have on there, too. The guy’s like 50 years old and he’s killing it. He’s still just as strong as ever. It would be awesome to have him back on. Aneesa dips in both. Aneesa’s awesome. She goes back and forth. She’s killing it. She’s actually one of the most successful elimination players of all time. People don’t realize that. She’s a force, that girl.

TVLINE | Alright, T.J. Give us the ultimate tease for The Challenge: USA for fans who might be a bit skeptical about this CBS version.
Well, first of all, “the rising tide floats all boats.” That’s something you have to keep in mind. Not only is it helping all of your MTV people, but it’s the crew as well. The MTV crew is working overtime to make something that they are very proud of. And so, if they’re proud of it, you should definitely give it a shot. If you’re a fan of the show, you know we’re going to come correct. We’re not going to leave it in the dark, man. This is something that’s very special to us. It’s our baby, and we’re not going to let it slide.