Nearly a year-and-a-half after confirming that a Frasier revival is in the works at Paramount+, Kelsey Grammer has shared an update on the timetable for its premiere.

During a Monday appearance on CBS’ The Talk, Grammer was asked where things stand with actually shooting the Frasier revival, and the five-time Emmy winner said, “There have been some conversations about [starting in] maybe October, maybe a little later.”

He went on to note that he has other projects in queue that may shoot first, “But we’re in the final stages of the final script for the first episode of Frasier, and it looks pretty good,” he said.

The Frasier reboot is IN the works and almost into production says @KelseyGrammer. pic.twitter.com/gXQnhuuCIl

Almost exactly a year ago, during an interview with WNBC New York, Grammer said that the revival had reached out to David Hyde Pierce, Jane Leeves and Peri Gilpin about reprising their respective roles as Niles, Daphne and Roz. (John Mahoney, who played Crane patriarch Martin, died in February 2018. “We deal with that some in the first episode,” Grammer said.) 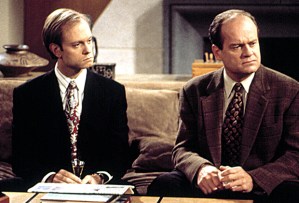 Pierce, for one, very recently indicated that his involvement is TBD.

“That whole time of my life [doing Frasier] is deeply important to me. And I would never disrespect that in such a way as to say just offhandedly, ‘Oh, no, thanks. I’m not going to do that again.’ It’s too valuable to me,” he told Vulture last month. “But by the same token, because it’s so valuable to me, I also wouldn’t do it just to do it. And I believe it can be done without me, too — finding new stories to tell, in the same way that Frasier did after Cheers.”

Teasing the revival’s premise, Grammer said last summer that the title character — who was first seen in Boston on Cheers, before relocating to Seattle for his spinoff — is “going to change cities again. There are some surprises there.

“He’s like the George Bailey of television,” Grammer quipped. “He thinks he’s gonna go off and do one thing, and sure enough his life takes him in another direction — and he ends up rich beyond his dreams.”