With its second episode of Season 4, HBO’s Westworld advanced its labyrinthine plot with more Man in Black savagery, Maeve and Caleb banter and angry androids than even Anthony Hopkins could handle.

The episode “Well Enough Alone” kicks off with William/the Man in Black attacking Clementine in her home. He shoots her and demands she tell him where Maeve is hiding. That said, it isn’t a given which William attacks Clementine and which one had that cartel massacred at the Hoover Dam last week. (Remember that Season 3 ended with Dolores-Hale seemingly replacing human William with a host-copy.) The show is already dropping visual clues that suggest Dolores-Hale is taking a “divide and conquer” approach with this William copy. The Man in Black we glimpsed during the premiere sported spiffy formal wear as he took control of a hidden data bank; this episode puts him back in his cowboy getup from the first two seasons. A wardrobe change isn’t out of the question, but we are betting that Hale has deployed multiple Williams.

Christina is reeling. When we left her last week, she was turning in after finishing a sentimental meta-monologue on her balcony. The man who had stalked her for weeks and blamed her for his suffering had just killed himself and now she wants to know why. As Christina investigates, Maeve and Caleb contend with their own mystery. 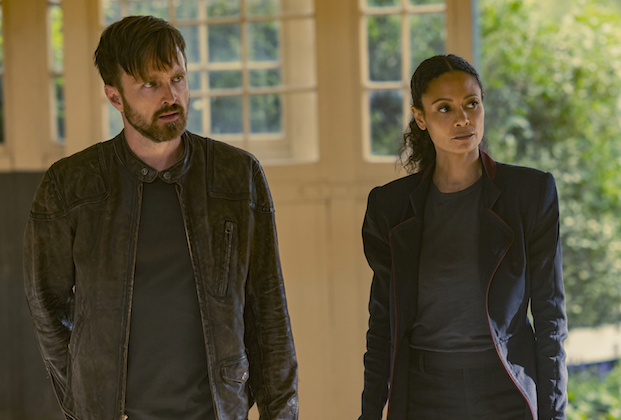 The two head off to visit Senator Ken Whitney, William’s former associate. They arrive at the man’s home and quickly discover that William and Dolores-Hale replaced the senator and his wife with host-copies. After killing one of the hosts, Maeve uses her ability to control other hosts to pull answers from the other. Armed with what they need, she and Caleb head to an opera house. They quickly discover that the vast theatre is empty… and that it’s a trap. Moments later, they’re whisked away on a train — one not unlike the one that carried trigger-happy guests to a theme park stocked with androids. That’s right: Maeve and Caleb are on their way to a new Delos attraction.

Christina’s investigation yields confusing results. Her quest for answers leads her to the Hope Center for Mental Health, where she finds an entire wing dedicated to the dead man she’s looking into, Peter Myers. She recalls his obituary noting his recent contributions to the clinic, but realizes that the wing was dedicated to him years ago. As she tries to make sense of this, she notices drawings of a tower in one of the rooms. And this isn’t the first mention of a tower. Earlier in the episode (and briefly during the premiere), Christina ran into a homeless man ranting about “the song with no sound” that’s “coming from the tower.”

Cut back to William, who is playing golf on his private course when the vice president and his Secret Service detail arrive. The interaction results in William striking the VP with his club, while Clementine, keeping watch nearby, kills the two Secret Service agents.

Elsewhere, Dolores-Hale wakes (the real) William from his forced slumber in a cloning machine, then calmly tells him that she is going to eradicate his kind before putting him back to sleep.

Season 4’s second episode then closes on William wowing a crowd with a new amusement park modeled after America in the “Golden Age” of the 1920s!

So to recap our recap: Christina is still not Dolores (yet), and Maeve and Caleb begin to uncover the exquisitely twisted machinations of Dolores-Hale. The Man in Black becomes more pawn than player and neither Teddy (James Marsden) or Bernard Lowe (Jeffrey Wright) makes an appearance. Oh, and some pretty high-ranking politicians meet violent ends.

It’s shaping up to be a busy (but thankfully more coherent) season of Westworld, don’t you think…?