At the time The Flash was renewed for a ninth season, showrunner Eric Wallace had already penned what he assumed was going to be a series finale. So, before the finale actually began filming, what all wound up being changed?

Wallace confirmed the season-ending change-up in a finale post mortem with TVLine, echoing that which multiple actors had shared throughout the season — that The Flash had been expected to end after eight seasons. But once leading man Grant Gustin closed a deal to continue Barry Allen’s journey, The CW ordered a Season 9, and Wallace and his team had to get to work!

For one, Wallace told TVLine, “We had to change the whole final scene” in which Barry and wife Iris (played by Candice Patton) post mortemed the Negative Forces’ season-ending reign of terror, which nearly led to Armageddon.

“We had  to rewrite it three different times,” he said, “because when it was a series finale, we had to have a much more deep conversation with Barry and Iris, dealing with the fact that they were going to have kids soon.

“It was a little bit sexier, and it was a lot more romantic of a scene,” he noted. “I really liked it.”

A series finale also would have demanded proper closure for the rest of Team Flash. “There would have been an additional scene with all of Team Flash all getting their goodbyes on,” Wallace shared. “But when we found out we had another season to play with, that meant, ‘Ooh, I can tease next year’s Big Bad? All right, let’s do that!’ So that final scene changed radically,” closing with a glimpse of a fiery blue crystal on display in a lab circa 2049, “and then the ‘Goodbye to Team Flash’ group party scene got deleted entirely.” 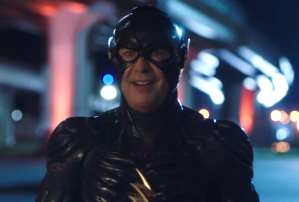 One thing that remained largely intact was the events leading to the final showdown between The Flash and Tom Cavanagh’s Negative Reverse-Flash aka the new, singular avatar for all of the Negative Forces.

As Wallace revealed in our finale post mortem, “We were like, ‘We’ve got to have the greatest, most epic battle ever between Grant and Tom! That’s how it has to end.’ And after the script was done and we were getting ready to start prep, that’s when we got the news that we would be getting a ninth season. So we were like, ‘Oh crap, we just did the ultimate battle. How are we supposed to ever top that?’ Then it was like, ‘Let’s just kill him for now and worry about that later.’”

Wallace said he had yet to ponder what new epic clash will ultimately close out The Flash’s eventual and actual series finale, when the day comes. Though he noted, “Reverse-Flash and the Negative Reverse-Flash, just like Frost, are dead. I mean, they are dead. Now… having said that… it is a comic book show, and I’m pretty sure that in Season 9, there’s some reason that you might see Tom Cavanagh again. I won’t go into it, but that’s a pretty safe bet.”

Want scoop on The Flash Season 9, or for any other show? Email InsideLine@tvline.com and your question may be answered via Matt’s Inside Line.