It didn’t take long for chemistry to spark between Loot‘s Molly and Arthur, and after Friday’s episode, we’re left with the age-old question: Will they or won’t they?

In Episode 4 (now available to stream on Apple TV+), the fast friends took a field trip to check up on Molly’s assets after a Philippine amusement park she didn’t know she owned nearly killed a batch of thrill seekers. While spending the day together, their easy-going vibe unfolded naturally as the couple-to-be (OK, we’re getting ahead of ourselves) discussed art, visited her alpaca farm and later flew Arthur’s daughter to her soccer game via helicopter.

“I love that Arthur is somebody she probably wouldn’t have met in her world,” Maya Rudolph tells TVLine. “They really don’t seem to have too much in common except for divorce, and I think that’s kind of a lovely place to start. Like, ‘Oh, you too? Oh, we are both human.’ I think she’s just happily surprised by how easy their relationship is, and [it’s] something she’s constantly never expecting and probably pushing away more than anything else because it’s so easy. It’s just not what she’s used to.”

On the surface, Molly and Arthur don’t appear to be that compatible. She’s a billionaire with her head in the clouds, while Arthur is a kind-hearted soul who enjoys the simplicity of a quiet life. So what is it that’s drawing these two seemingly different divorcées together? 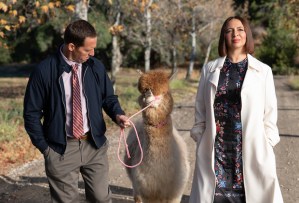 “Molly and Arthur bond over that transitional moment of trying to figure out what’s next,” says Nat Faxon. “I think what he really enjoys about Molly is her sense of adventure, a sense of being a little louder than he’s comfortable being… stepping out of his comfort zone, being less timid, less afraid and enjoying all that comes with life and not overthinking everything. And I think he’s giving something to her as well, as far as taking a breath and enjoying the simple pleasures in life, and that it doesn’t always have to be a major huge event. It can be something small and poignant and simple and carry just as much meaning, if not more.”

While perusing an art gallery Molly owns, Arthur mentions that his favorite painting is a small, plain portrait of a bird. “I’ve always liked birds,” he tells her. “They’re just these beautiful, perfectly made little creatures. And normally, you only get a second of that beauty because you know they’re going to fly away.” When he steps away for a bathroom break, Molly buys the painting and arranges to have it sent to his house. But when he receives the gift, the look on his face is one of confliction and almost discomfort.

“All these emotions are bubbling to the surface, and he’s battling whether to embrace them, accept them or reject them,” says Faxon. “I think that moment is Arthur trying to figure out, ‘Can I open myself up to this woman? Can I put myself out there? Do I have the courage to be myself and just go for it, or is this just a dead end?’ That painting represents a lot of his confidence and willingness to be a little more vulnerable and naked in his relationship with her.”

So what does that mean for the new colleagues’ future? Will they go for it or continue to be shackled by their very different, very painful pasts? 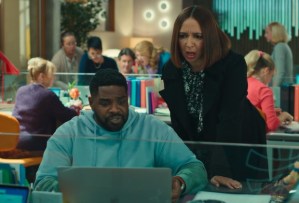 “They’re both trying to navigate whether the relationship makes sense or not,” adds Faxon. “If they were able to take themselves out of everything, they would, but because there are so many layers and obstacles and boundaries within their worlds, it complicates things. I think it’s a nice, honest and relatable look at when you really like someone and you don’t know how to put that into action.”

Teases Rudolph: “I think there’s more for them to grow into and explore. I’m making it sound like we’re doing a million episodes. [Laughs] I don’t know how many more we’re doing. I just work here!”

Loot fans: Do you want to see Molly and Arthur take the next step? Sound off in the comments below.