Nearly two years passed between the release of The Umbrella Academy‘s second and third seasons — and Ben Hargreeves apparently used that hiatus to get a haircut. 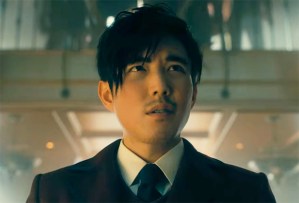 Of course, there was so much going on during the Netflix drama’s Season 3 premiere — most notably, a trippy, Footloose-inspired dance sequence — that you wouldn’t be blamed for overlooking some of the episode’s minutiae. But upon revisiting the final moments of the Season 2 finale, when the Sparrow Academy was first introduced, we noticed something had changed when the Season 3 opener kicked off with the exact same scene: Ben was no longer sporting the long, asymmetrical bangs that he originally flaunted in the sophomore conclusion, and actor Justin H. Min couldn’t have been more thrilled about the change.

“You know, they talk about the happiest day in your life,” Min jokes, reflecting on the day that Ben’s ‘do was changed during Season 3 production. “The bangs had a great run, but they had to go. They kept falling out. It was going to be a nightmare to film with that, so the hair went up, and we called it a day.”

The switcheroo came from series creator Steve Blackman, who laughs to TVLine that he “couldn’t stand” the hairpiece used on Min for the Season 2 finale, prompting a hairstyle change that he says was worth the continuity error between episodes.

“We shot that [original] scene on the very last day of Season 2, and I did not want them to do that to his hair,” Blackman shares. “It’s supposed to be continuous [into Season 3], but… I wanted to change it. So did Justin, so we did a little flip of that.”

Min adds that because he shaved his head while in quarantine during the pandemic, attaching Ben’s long bangs to a buzz cut would have been more impractical than ever.

“It would have been really, really tough,” he admits. “Thank you, Steve Blackman, for making that executive decision.”