The following contains a casting spoiler from the Obi-Wan Kenobi season finale on Disney+.

From early on in the first episode, Obi-Wan Kenobi‘s title character was seen trying to commune with Qui-Gon Jinn, the Jedi Master under whom he trained as in the first prequel trilogy movie, Star Wars: Episode I — The Phantom Menace. But to no avail.

Until, that is, Obi-Wan had clashed not once but twice again with Darth Vader aka his onetime padawan Anakin Skywalker, and arrived at a bit of bittersweet closure following their second lightsaber duel within the Disney+ series.

After leaving a critically wounded “Darth” behind on a barren moon, collecting his things on Tatooine and then bidding the Larses farewell — but not before officially meeting a young Luke — Obi-Wan rode his eopie across the dunes. He did not stop until a familiar face stood in his path, basked in the glow of a Force ghost.

“I was beginning to think you’d never come.”

“I was always here, Obi-Wan. You just were not ready to see.” Qui-Gon then nudged Obi-Wan to follow him, saying, “Come on, we’ve got a ways to go….” 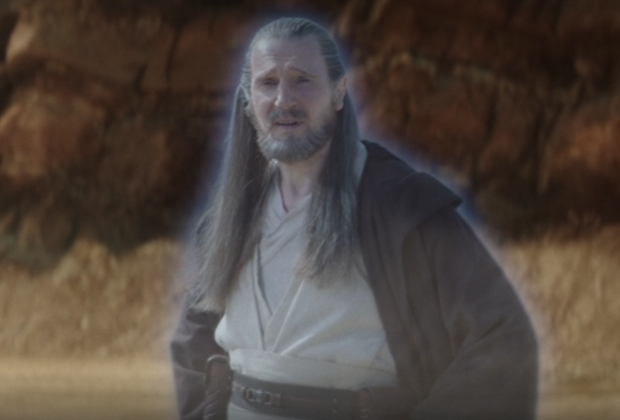 Neeson originated the role of Jedi Master Qui-Gon Jinn in The Phantom Menace, and also voiced the character in episodes of Star Wars: The Clone Wars and as part of an audio montage in Star Wars: Episode IX — The Rise of Skywalker. And though a year ago he dismissed the idea of reprising the role in former co-star Ewan McGregor’s Disney+ series (“No, I don’t think so. No, I haven’t been approached,” he said on  Jimmy Kimmel Live), here he was in the finale, scraggly locks and all.

Explaining his eventual encore to our sister site THR, Neeson, said. “I certainly didn’t want anyone else playing Qui-Gon Jinn, and I wanted to show my respect for [Star Wars creator] George [Lucas] and that mythical world that he created.

“Plus, Ewan is a pal,” the Irishman added, “and I loved working with him during The Phantom Menace 25 years ago.”

Were you delighted to see Neeson do right by George Lucas and old friend Ewan McGregor? But dare we hope to see him play Qui-Gon any further, if Obi-Wan gets a Season 2?