If the Obi-Wan Kenobi finale attempts to backfill the most obvious Star Wars canon plot hole it has created, the Disney+ series in doing so may give added emotional weight to a big moment from the original film trilogy.

The canonical disconnect at hand has been well discussed with each passing episode, and it involves how Princess Leia in Episode IV — A New Hope addresses the intended recipient of her message implanted in R2-D2.

“General Kenobi, years ago you served my father in the Clone Wars…” is not how a young woman who shared such an intense, post-Revenge of the Sith adventure with Obi-Wan would address the Jedi master. And though some fans have hand-waved it as Leia showing a certain decorum, or keeping their past exploits in confidence, Obi-Wan Kenobi writer/executive producer Joby Harold has indicated that the apparent hiccup in continuity will be addressed before the season is over, this Wednesday.

“We talked about it a lot,” Harold told EW.com, speaking about Leia’s New Hope hologram. “And we’re looking forward to the show airing in its entirety so that hopefully all questions are answered fully. So it’s tricky to field some of those questions mid-process. But yes, all I can say is we’re very cognizant of that, and of canon.” 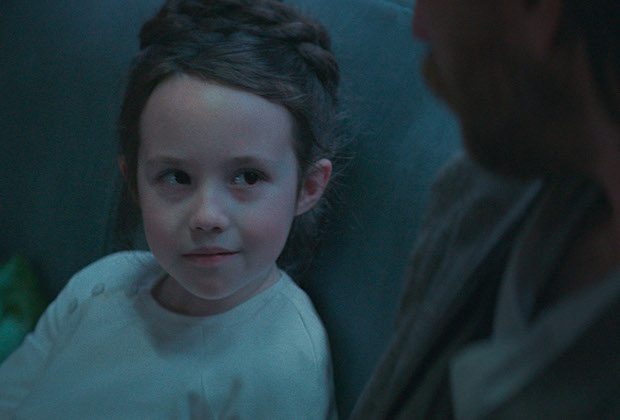 But how exactly might this question be fielded in the season finale, and why?

When last we tuned in, Obi-Wan — after escaping Darth Vader and his Imperial forces’ assault on the Path’s Jabiim  base — sensed that something very “wrong” was about to happen. Viewers in turn saw an injured Reva, back on Jabiim , watch fragments of Bail Organa’s holo-message to Kenobi, in which Leia’s father worried that someone has “learned of the children” and then referenced “Tatooine,” “Owen” and “the boy.”

Obi-Wan will now likely make a beeline for Tatooine, with wee Leia in tow — if only because Bail said that he also was heading to the desert planet.  So there is every possibility that as Obi-Wan races to safeguard young Luke, Leia will come to learn, or correctly sense, that she has a twin brother.

That is a dangerous piece of information for her to hold onto, after such drastic measures were taken to cover up Padme’s delivery of twins. So a desperate Obi-Wan, as some have speculated, might use the Force to apply a “memory rub” and leave young Leia unaware of all that she has been through with him — twin brother discovery included. 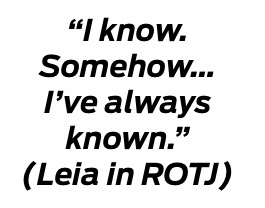 Of course, Leia as a young woman eventually learns that Luke Skywalker, with whom she shared many an adventure (and a kiss, oops) in the original film trilogy, is her brother. Luke spells it out for her ahead of the final act of Return of the Jedi , saying that the Force has always been strong with his family… “my sister,” included.

Leia in that moment is caught a bit off guard, but then responds, “I know. Somehow… I’ve always known.”

Until this point, we assumed that Leia’s intuition about Luke was solely Force-based. But if Obi-Wan Kenobi with its finale reveals to pint-sized Leia that Tatooine’s Luke Skywalker is her brother, and then rubs that memory away, the ROTJ reveal and her response will be given a wonderful new weight, for those who tuned into the Disney+ series.

What do you think? Will the Obi-Wan finale give li’l Leia a mind wipe?