Warning: The following contains spoilers for The Boys Season 3, Episode 5. Proceed at your own risk!

Kimiko and Frenchie weren’t the only pair moving into new territory on The Boys this week.

In the latest episode, Butcher told Maeve that the trip to Russia in search of a weapon capable of killing Homelander came up empty. Feeling defeated, the two got drunk — so much for their sobriety — and commiserated about the sad state of affairs. Then Maeve leaned into Butcher and… the two kissed! When Butcher stood up with a sternly shocked expression, Maeve followed and challengingly replied, “Still think you’re too good for me?” Let’s just say he definitely wasn’t too good to not have sex with her.

“The writers talked about that moment as like desperate and a little grimy,” showrunner Eric Kripke tells TVLine. “We talked about Monster’s Ball, when Billy Bob Thorton and Halle Berry hook up and it’s just so grimy because they’re both mourning deaths. So we talked a lot about [how] they’re both so cornered right then and there, and they both have so much in common, surprisingly, [in] how much they hate Homelander, how much they hate superheroes, in general, how f—ked they both feel. And then it just kind of explodes in this hookup.” 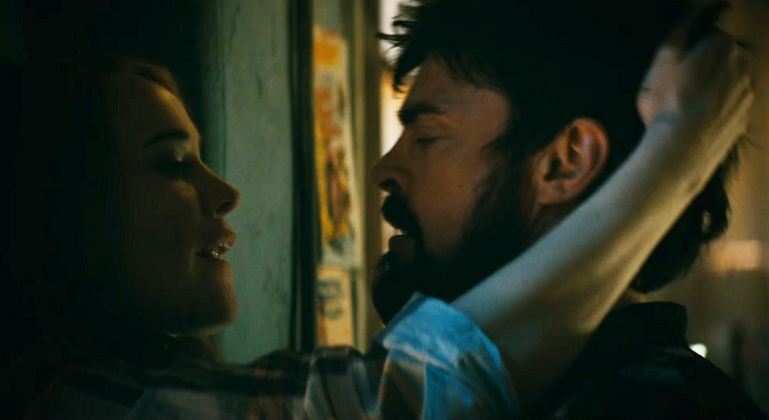 Unfortunately for Maeve, Homelander could smell Butcher on her after the hookup, leading him and Black Noir to kidnapped her. Starlight feared that Maeve was dead, which Ashley would neither confirm nor deny, instead spinning a story about how Maeve had entered a wellness center for treatment.

“You should be very concerned about [Maeve’s] wellbeing, but tune in to see. She’s in a tight spot,” Kripke teases.

As for whether Homelander’s decision to take Maeve captive was an act of jealousy or about him feeling betrayed, Kripke believes his response was the culmination of many perceived threats over the years. “I don’t think it was an impulsive moment,” Kripke says. “For Homelander, it was a long time coming. It’s the airplane video that Maeve has been blackmailing him with, it’s years of small slights that he like banks away. For the writers, it was a sign of, oh wow, this guy really is in control at Vought because he’s starting to settle his debts, and that’s what makes him so scary.”

The Boys fans, what did you think of Butcher and Maeve’s hookup? And do you think Maeve is alive or dead?