Victor Salazar’s teenage love story came to a close this week with the release of Love, Victor‘s third and final season. And though Victor took the scenic route on his way back to OG boyfriend Benji, the pair ultimately ended up back together — in some form, at least — by the end of the series finale… as we all sorta knew they would, right?

During the series’ very last episode, Victor accepts the Bravery Award from his basketball team, and he uses his speech to acknowledge what bravery really is: not the complete absence of fear, but a willingness to embrace the scary things in life, which are often the most important things, too. (The speech seems to strike a chord with Mia and Lake, as well, but more on that in a minute.)

Victor’s current love interest, Nick — who calls himself Victor’s boyfriend for the first time right before the awards ceremony begins, and Victor seems pretty ambivalent about that milestone — realizes during Victor’s speech that Victor still isn’t over Benji, and Victor admits to that fact when they catch up after the ceremony. “I really tried to be,” he says, but there are no hard feelings on Nick’s part: He never imagined he’d be a relationship guy, but now that he’s met Victor, he has hope. Aw! 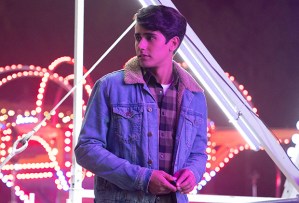 Later, Victor jogs over to Benji’s house — that’s becoming a pastime for him! — and finds him packing up the car to leave for boarding school in Connecticut, where Benji previously revealed he’d be transferring. But Victor insists that he hasn’t moved on from Benji just yet, and contrary to Benji’s dad’s feelings, Victor isn’t bad for Benji; if Benji also feels like they’re right for each other, could they give this another shot? (Meanwhile, Benji’s learning in real time about his dad’s brutally honest conversation with Victor from Episode 5, which is painfully uncomfortable.) But Benji tells Victor that he’s already decided to go to Connecticut, and Victor’s unfortunately too late.

The episode ends at Creekwood’s winter carnival, where quite a few milestones take place in the Love, Simon/Love, Victor universe, and Victor seems bummed but ultimately content with the way things panned out between him and Benji. In fact, when he approaches the carnival’s ferris wheel, Victor tells the attendant he’s riding solo, “and I’m OK with that.” But just as he’s about to board, Benji shows up, asking if there’s room for one more.

During the ride, Benji tells Victor that he had a long talk with his parents, and he came to the conclusion that Victor isn’t his trigger for drinking; his parents are. And though Benji knows that “I still need to work on myself, like, a lot,” and he’s not sure how things will end between him and Victor, he does know he wants them to be together. And when he asks Victor if he ever wonders what would have happened if they’d ridden the ferris wheel together at last year’s carnival, instead of Victor riding it with Mia, Victor says no.

“That isn’t our story,” he tells Benji. “This is, and it’s perfect.” They kiss! The camera pans away! It’s a happy-ish ending, after all!

As for Love, Victor‘s other couples…

* After briefly reverting back to their dating days, Felix and Lake acknowledge it’d be too safe and easy to get back together for real — and besides, Lake’s in love with Lucy! Which she plans to tell her! At some point! Later on, Lake takes Lucy to a condo that Lake’s mom occasionally stays at when she needs some alone time; if Lucy’s interested, Lake’s mom has already OK’d Lucy moving into that condo after she graduates at the end of the semester.

Lake says she’ll completely understand if Lucy still wants to move far from Creekwood, but Lucy says her perspective on the town has changed: Living in Creekwood used to exclusively make her sad, but since she’s been with Lake, the town gives her warm and fuzzy thoughts about her girlfriend. In short, she’ll take the condo — and she’s in love with Lake, too. 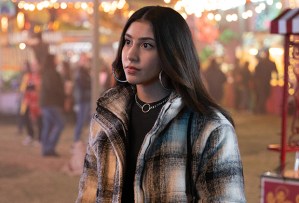 * Felix and Pilar, meanwhile, stay broken up when all is said and done, but Felix clears the air with his ex at the carnival. He tells her that before the Salazars moved to town, Felix’s life wasn’t in a great place, and he came to truly appreciate — and need — the affection and support that Pilar’s parents showed him over the last year; when Armando and Isabel kicked him out of their apartment, he thought it was important to keep his distance from them. But Felix tells Pilar that she deserves a boyfriend who puts her first always, and he’s sorry he couldn’t be that for her. After that speech, Pilar pulls him over to be included in the Salazars’ family photo, and she and Felix share a smile.

* Mia reveals to Andrew that she’s moving to Palo Alto next week. When he offers to visit her frequently, and even miss some school days to help her get settled, she tells him not to throw away everything he’s worked for, and he’s hurt that she’d rather call it quits than fight for their relationship.

Later, though, Mia is moved by Victor’s speech about the true definition of bravery, and she stops by Andrew’s house to assure him she does want to fight for what they have. She was terrified to try a long-distance relationship — what if Andrew got sick of that arrangement eventually and broke Mia’s heart? — but she’s now willing to “embrace the scary,” as Victor advised. Andrew, meanwhile — who, throughout these three seasons, went from villainous jock to World’s Best Boyfriend…? — has zero doubt that he and Mia will make it work. “You and I are going the distance, Mia Brooks,” he tells her. “Deal with it.”

With that, I hand it over to you. What did you think of Love, Victor‘s conclusion, and the final season overall? Grade both in our polls below, then elaborate in the comments!