Mo’ speedsters, mo’ problems is typically The Flash‘s mantra. But could Dr. Meena Dhawan aka Fast Track prove to be a true superfriend?

Inside Line: Get Scoop on The Flash and More! 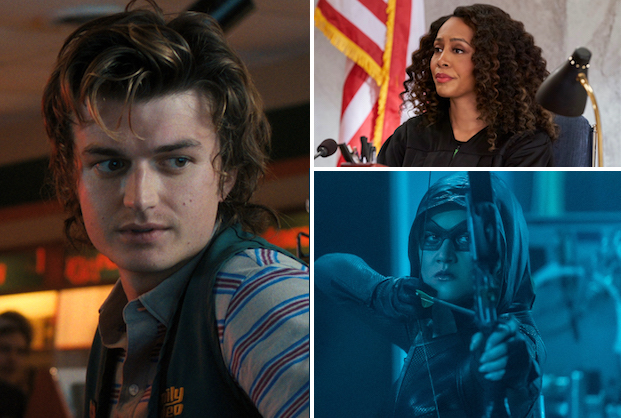 At the close of the CW series’ June 8 episode, The Flash (played by Grant Gustin) caught up to Central City’s latest, mysterious speedster, who promptly doffed her makeshift mask and revealed herself to be Dr. Meena Dhawan, an esteemed scientist (and a popular character from the comic books). Rightly impressed by Meena’s ingenuity/ability to create artificial speed, Barry offered to mentor the new ally.

That nascent mentorship will be tested this Wednesday at 8/7c, though, when Barry visits Dr. Dhawan at Fast Track Labs and lays eyes on her disturbingly familiar-looking colleague, Eobard Thawne (played by Arrowverse vet Matt Letscher). Is The Flash walking into another sinister speedster’s trap?

TVLine spoke with new recurring player and 4400 alum Kausar Mohammed about the Meena reveals to come, as well as the “big questions” raised by the OG Thawne’s apparent return….

TVLINE | Who had to do more mentoring — Barry with Meena, or Grant Gustin teaching Kausar how to do the “speed-running” arm motions?
Oooh, let me tell you, 100-percent Grant! [Laughs] In a sort of “set emulates life” thing, every two minutes I was like, “Wait, where does my hand go? Where does my foot go?” But he was patient and kind about it, and I was very appreciative.

TVLINE | How would you describe the Meena/Barry dynamic to start? He seems to be a bit of a fanboy of the renowned scientist.
What’s fun about it is you have two incredibly smart characters and they get to geek out a bit together.

TVLINE | What will we learn about Dr. Dhawan this week?
Hmmmm… I think what folks can look forward to is learning more about her backstory. I really was drawn to the character after reading in the comic books how Dr. Meena Dhawan was sort of struck with balancing these new powers that she didn’t know what do do with. That emotional arc was something I was drawn to, and you get to see that backstory as the episodes go on.

TVLINE | I do have to wonder why a scientist would pretty randomly want to become a speedster….
Yeah, that’s a really exciting part of it. The writers, [showrunner] Eric [Wallace] and everybody on the team, did such a great job creating a juicy character that I cannot wait for the audience to see.

TVLINE | Things look pretty intense — and justifiably so — between Barry and Meena’s colleague, Eobard Thawne, in the promo for this week. How does that play out between the fellas?
That’s also something that I’m excited to share. Eobard is someone that Meena works with, and there are intricacies between them that we get to learn about. But his appearance definitely raises big questions. How is he alive? What is he doing here? And we get to see all of that through a different character, in Meena.

TVLINE | Did Matt Letscher give you the 10-cent tour of his own Arrowverse past? Because it’d been very interesting over the years.
Oh my gosh, yeah. And Matt is amazing. I love working with him, he is truly a gem. He’s “been around” in the Arrowverse [Laughs], so it was an honor to work with him. 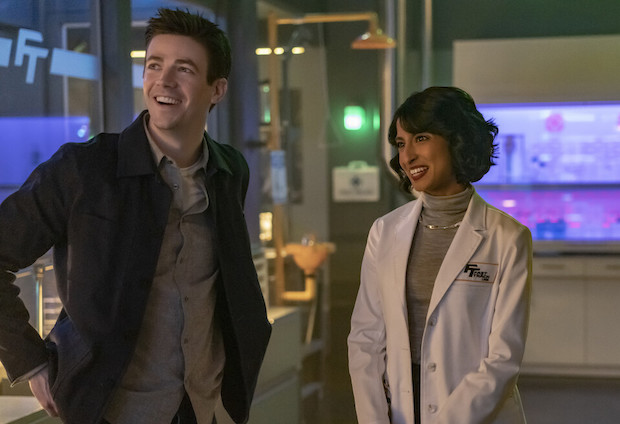 TVLINE | As much as we like to see Team Flash members make new friends… it does often come back to bit them in the butt. How worried should we be about Meena aka Fast Track?
I will say that “with great power comes great responsibility.”

TVLINE | I don’t believe you can steal that line.
It’s the wrong [comic book] universe! [Laughs] But yes, we’re going to explore all of that. It’s certainly complex, this burden that she has. We’ll see how Meena deals with it.

TVLINE | It appears that you are around for the rest of the season, and destined for a supersuit. How did that fitting go?
It was quite the process, and I have so much respect for anyone whoever has to be in a suit. It was done over series of fittings, and the costume designer, Kate [Main], is just phenomenal, the way she concocted the outfit, and then the team that brought it to life…. It’s honesty a huge collaboration between hair and makeup and costume, and it was so much fun. I learned that those suits are very, very tight. [Laughs] But it was one of my favorite things. There were surreal moments where I was like, “I am literally wearing a supersuit!” It was such a dream of young Kausar growing up.

TVLINE | You have a considerable comedic background. Will Meena get to be funny in any way?
For me, when it comes to any character, my question is always, “How can I make it a little funny or a little lighter?” And even in the comic books, Meena has a charming side to her, she’s a little fun, so we get to see bits of that here and there.

TVLINE | Looking ahead, how would you tease the season finale (airing June 29)? I’ve been hearing all kinds of “huge” things from others….
It is bonkers. And exciting. Anything could happen!

TVLINE | You’re part of the voice cast for Netflix’s Jurassic World: Camp Cretaceous. How quickly did you go out to see Jurassic World: Dominion? Or have you been delinquent?
I have been delinquent, but I cannot wait to go see it. I like to watch things like that with my family, so I’ll probably be doing that. But huge, huge fan of the franchise.

TVLINE | Do you have a favorite dinosaur?
Yeah — pterodactyls, for sure. They’ve got wings and they’re dinos? It’s the best of both worlds!