The main takeaway from Sunday’s series finale of Gaslit wasn’t what President Nixon knew or what his despicable conspirators did. It wasn’t even who did time or who earned redemption after the stain of Watergate was left on American history. It was this and only this: Martha was right.

After a scramble to gather damning audio tapes in Washington, Agents Magallanes and Lano continued taking down the rest of guilty party, including Martha Mitchell’s now-estranged husband John. And while the hammer continued to drop, it became crystal clear that everything Martha had said about Nixon both publicly and to the Senate was spot on. After the Feds applied some pressure to John Dean, he too agreed to testify and the rest is, well… history.

But as a result of the scandal and her subsequent testimony, Martha’s life was forever torn to pieces, as she desperately tried to make things right with her daughter, Marty, and learn to adapt to her new rather lonely life. As Nixon’s presidency collapsed like a house of cards and shocked the nation, Martha’s bone marrow cancer wound up claiming her life when she was just 57 years old.

Below, Gaslit creator, executive producer and showrunner Robbie Pickering explains to TVLine why he finds hope and not tragedy in Martha’s story, and breaks down Winnie’s finale apology, the danger of zealots like G. Gordon Liddy and where John Mitchell landed when all of the smoke cleared.

TVLINE | The Watergate story has been told and retold so many times over the years, but this show examined it from a fresh perspective. What was it about the Martha’s story that made you want to revisit it all?
ROBBIE PICKERING | The Watergate story has been told, but the reality is that you’ve heard an incredibly narrow telling of that story. People like Martha Mitchell, Frank Wills and Paul Magallanes, their stories haven’t been told, ever, and that’s kind of a crime in 50 years. It’s an indictment of how we view history, and how we remember people in the history books. We tend to remember the great men of history, and forget about the women and the Black people, and the losers of history.

Anybody who reads the history of Watergate, anyone who’s been a Nixon geek for as long as I have — since I was a kid I’ve been a Nixon geek — you love movies like Nixon, you love movies like All the President’s Men, but you also know that there are so many other stories out there to tell. That’s the way it goes with every one of these [events] from history. There are so many more stories to tell, and they give us insight that makes it seem fresh. We can relate to those stories better and see our ourselves and our own flaws in these people, better than seeing yourself in the heroes, Woodward and Bernstein, or the great villain, Nixon. It just makes the story more human. 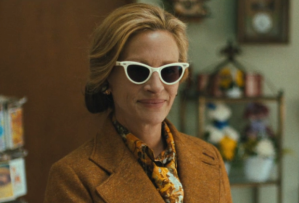 TVLINE | What do you want viewers to take away from this series in terms of who Martha Mitchell was?
The point of the series is complicity and that complicity and horrible things can come from the best of us, and it comes from human needs, like the need to be valued, and ambition and greed. We’ve all done things that go against our moral precepts at one point or another in our lives. So, while complicity can come from the best of us, heroism can come from some of the most flawed among us, and I think Martha was very flawed and a very complicated person. She was an alcoholic, and probably had borderline personality disorder. She was an easy person to vilify, but all the men around her were alcoholics too. All of the men around her had their own flaws.

I think it’s a bug of history that somebody like John Dean, who did speak the truth, is remembered somehow as this great hero and is still talked about, and nobody knows who Martha Mitchell is after all these years. They both told the truth. The only difference was Martha told the truth a year before Dean. And Martha wasn’t complicit in the Watergate burglary, although she was complicit in horrible things before that. I don’t think of Martha’s story as a tragic one, I think of it as one that gives me hope. We live in times where the things that drive these people to be complicit in the show — John Dean’s ambition and John Mitchell [wanting to] feel valued by someone in power — all of these are causing horrible things around our country and our world right now. Putin in Russia, Trump here, the rise of alt-right fanaticism around the globe. But, the hopeful thing is that this has happened before. While there are people who are complicit — the zealots, the ambitious, the greedy — there are also people like Martha. We all have the potential for both inside of us. 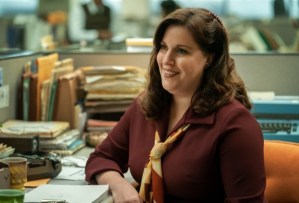 TVLINE | In the finale, Winnie apologizes to Martha, admitting that she wasn’t sure if she believed her at first. What’s going through Martha’s head there when she hears that?
Martha isn’t here so I can’t talk to her, but from what I read about her at the end of her life, she started getting past all this Nixon drama, and all the drama of politics. It’s not a surprise to her that she was not believed by people like Winnie. Winnie is based not only on Winnie McLendon, but an amalgamation of different female journalists at the time like Helen Thomas and Elizabeth Drew. She’s also based on people like Nora Ephron, who wrote a beautiful essay about not believing Martha while she was alive, and how a lot of liberal women like her understandably hated Martha.

But Martha took this stance that was so selfish in a certain way, but brave. She couldn’t stand the hold that Nixon had over her husband, but it developed into something completely selfless. Women like Ephron and Lily Tomlin famously hated Martha, but came to really admire her and believe her. If anything, Martha was probably surprised by the fact that they came around to believing her. So, I feel like there’s a little bit of satisfaction for her in hearing that, probably, but I think Martha’s moved past the point of caring about this stuff and she’s just trying to save her family and get through to her daughter at this point. She’s more comforted by having Winnie as her friend.

TVLINE | Shea Whigham delivers a knock-out performance in this series. What can you say about how the character of Liddy was crafted and were any liberties taken there?
That scene in the finale between Liddy and Dean really happened. The rat stuff is a liberty we took, but there were crazier things that happened to him and that he did in prison. Liddy, by his own word, is pretty unbelievable. If I told you a lot of the actual stories about Liddy, you wouldn’t believe me. You’d think I made them up. So we actually toned him down a lot.

Among the books about Watergate and Nixon, Liddy is by far the most entertaining and honest narrator of that period. I trust Liddy over anybody else because he’s a fanatic and he’s admitted to really embarrassing things. He’s proud of it because I think in a lot of ways, the zealot and the Rasputin characters are the most honest in these dramas. It’s easy to get wrapped up in Liddy’s language and how funny and crazy he is, and he’s charming in a certain way. But the thing you can’t lose sight of is that if the United States went Nazi, that guy would be the greeter at the concentration camp. He’s a fascist, he is dangerous, he is a fanatic. 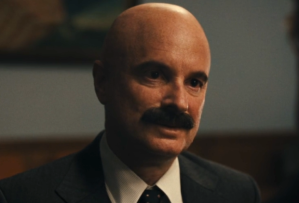 And so are a lot of these fanatics throughout history… Steve Bannon, Pat Buchanon, Michael Flynn. Right-wing fanatics like these — and there are left-wing fanatics as well — are sometimes fun to listen to. Liddy is singular, but you cannot lose sight of how dangerous he is and the darkness at the center of him, and that’s what we really had to concentrate on in portraying him as a character.

Shea had to never wink at the audience for that performance. His performance of Liddy had to be completely lived in. He had to completely believe it. He could never be chuckling at the character or judging him in order to make that performance work and give it the gravitas we needed. Shea was 100 percent vital to not losing sight of Liddy’s danger or the bad things about him, and making it too funny or too jokey.

TVLINE | I loved the track you used in the finale’s closing montage. Why’d you decide to go with Wolf Alice’s “Don’t Delete the Kisses”?
I would always tell our co-executive producer and my creative partner Amelia Gray these images I had for the show. I played that song to her and described that montage almost exactly how it plays. When the song crescendos, I was like, “Now you’re pushing in on Mitchell, and he’s realizing that Martha might be being buried, but he’s the one who’s dead. He’s the one who’s alone now. He’s the one who will live in pain for the rest of his life over this.” I didn’t want a Robert Zemeckis-y, Creedence Clearwater Revival type. I never wanted that kind of song at the end of it, like the ’70s songs you always hear. I wanted something really emotional and earnest and about love. I wanted something hopeful, because I do find Martha’s story hopeful. I think she finds peace in the end. The kind of peace that maybe only she and Frank Wills find in the story. There’s just something about the song that feels like a girl in love. I love that about it, and I love that it’s a different kind of song to be playing in this kind of show. You don’t hear songs like that in shows about this period. You hear the same songs over and over again. 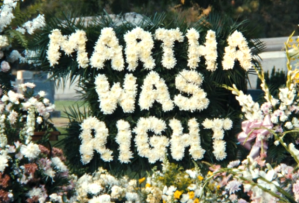 TVLINE | We end at Martha’s funeral, and the last frame zeroes in on flowers that spell out “Martha Was Right.” Did you always know that would be the series’ final shot?
Yeah. Any writer or producer will understand that things change completely from script to screen. This is the only thing I’ve ever done where the episodes are surprisingly faithful to what I wrote in the scripts, and that’s the ending in the script. I think I wrote, “Martha’s wreath is standing there, impervious to the winds that buffet it,” and Marty walks away and we fade to black on the wreath. I think that is such a powerful message. Yes, she was f–king right! [Laughs] She was right, dammit!

Leon Neyfakh, who did the podcast Slow Burn, spoke to Martha’s son, Jay Jennings. Martha’s kids are remarkably private. They don’t really talk to anybody, but Jay told Leon, “All I want is for my mom to be remembered as something other than the drunk clown.” Throughout making this production, that’s what I kept going back to. That this woman’s son wants his mother to be remembered as something other than a drunk clown. I think that the best thing to remember her by at the end of the show is that she was right. She told the truth. That’s it. Not John Dean. Not any of these other people. She did it first. I hope that when my daughter learns about Watergate in school, that she will learn about Martha and know who Martha is when she grows up.