HBO Max’s dramatization of The Staircase has rested its case — but did it answer all of our questions?

The finale opens in 2017, with Michael ready to make an Alford plea to voluntary manslaughter so he can avoid further jail time and still maintain his innocence. He sits down for an interview with Jean and jokes that he wants to talk about baseball — but we don’t hear what he tells Jean, only that he asks Jean to not tell Sophie about it until she sees the footage. In 2011, Michael’s kids prepare themselves for his retrial hearing (and Margie learns that Martha is into girls), and in 2001, a spiraling Kathleen and Michael rekindle things and attend a fancy holiday ball, sharing an romantic slow dance. (Kathleen even runs into future prosecutor Freda in the ladies’ room.) 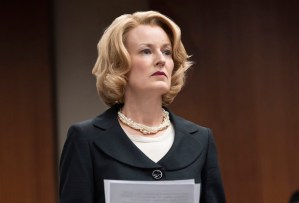 At the 2011 retrial hearing, Michael’s family is in the courtroom supporting him, but at the 2017 plea, just Sophie is there. (“Looks like they came to their senses,” Kathleen’s sister snipes.) Candace gives the same impassioned speech arguing against Michael in both timelines, and in 2017, she scoffs at the Alford plea: “An innocent man doesn’t plead guilty. A guilty one does.” In 2011, Michael’s lawyer David Rudolf lays out the prosecutors’ cozy relationship with the SBI and how the SBI’s biased testimony could’ve unfairly swayed the jury. The judge agrees, and he’s granted a new trial — and released until then. In 2017, Michael pleads guilty to voluntary manslaughter and is free to go.

He celebrates with his family in 2011, though he’s fitted with an ankle bracelet and given a 10 pm curfew. Plus, their favorite restaurant won’t give them a table because “we don’t seat convicted killers.” In 2017, we learn that the retrial never happened and his Alford plea effectively closes the case. Margie is now working on a documentary of her own, and she wonders if she should’ve gone to his plea, but her siblings agree that it’s “still hard to be around him.” Candace fumes that he’s free and blames herself for not warning Kathleen about him earlier: “I had a feeling.” Plus, we also flash back to the night of Kathleen’s death; she bemoans the fact that they have to give up Paris and Aruba, but Michael is happy to settle for “pasta and Blockbusters.” 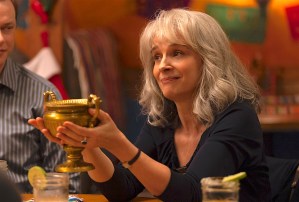 Michael and his family find a restaurant to host their celebration dinner in 2011, but the mood is awkward: Todd orders a double tequila after waving off alcohol earlier, and a round of toasts ends with Todd pointedly telling Michael, “You made me the man I am today.” Michael starts to give his own speech, but he falters, and after several false starts, he excuses himself to the bathroom. He’s clearly on edge, and he viciously snaps at Margie when she tries to order dessert. On the way home, he tells Sophie he’s broke, but she vows to take care of him, and they share an intimate moment in the bedroom. Meanwhile, a drunk Todd has to be helped home by Clayton, and Margie finally tells Martha about Michael trying to separate them as kids.

Back in 2017, Sophie is packing up for her and Michael to fly to Paris together, but he drags his feet. He says his kids need him here, but she points out they didn’t even come to his plea. He finally admits he’s not coming to Paris, and when she gets upset, he finally explodes: “I don’t want to live with women anymore!” He also admits he doesn’t know if he ever loved her (ouch), and Sophie runs off in tears. At Jean’s, she watches the video of Michael before the plea, where he remembers fantasizing about a male friend as a kid and was punished by his dad for “experimenting.” He also admits he never told Kathleen he liked men. He still insists Kathleen’s death was an accident, but Sophie is devastated: “This man is a liar! He lied about everything!” Jean’s not sure if he’s innocent, but he does know Sophie is better off without him. 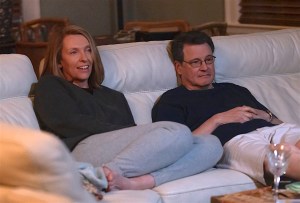 We hop back to the night of Kathleen’s death, and after a call from work, she asks if she can use Michael’s email. He says yes, but he’s definitely weird about it. (Is this where he could’ve told her? Or did she find out on her own?) By the pool, they have a dream-like conversation that spans the timelines, with Kathleen speaking from beyond the grave and telling Michael their kids are all OK… and asking him why he never told her about his secret desires. “It wasn’t a lie,” he insists. “It just wasn’t the whole thing.” In 2017, Michael calls his kids and tells them he’s not going to Paris and that he hopes to see them soon. He puts a photo of Kathleen next to his bed, and the camera pans around to his face as he looks directly into it… and offers a slight smile. (An end card tells us that Michael never left Durham and still maintains his innocence — and the last words we see on screen are Kathleen’s name.)

So what do you think: Did Michael do it? Give The Staircase a grade in our poll, and then hit the comments to share your thoughts and theories.