In Disney+’s Ms. Marvel, which debuted its first episode on Wednesday, Kamala Khan is Captain Marvel’s biggest fan. The teen runs a superhero-themed YouTube series, makes her own cosplay outfits, and aspires to be just like her favorite Avenger.

Kamala’s fangirling is familiar territory for head writer and executive producer Bisha K. Ali, who admits to geeking out when she was younger and thus approached fan culture through a celebratory lens.

“I was a nerd when it wasn’t acceptable and cool…  so I understand the passion and love of fans,” she tells TVLine. “That was really important to us in the construction of this show, that Kamala Khan herself is a fan. This is a show for fans, and for a fan’s fantasy of becoming part of Marvel.”

For Ali, the Disney+ series needed to “speak to this generation of viewers who have got the MCU in their bones. It was really exciting to be able to tell a story from that perspective. Kamala is going to represent the audience so much in the story going forward.”

In Episode 1, Kamala sneaks out of her house to attend AvengerCon (an Avengers-themed convention) and participate in the Captain Marvel cosplay contest. The scene featured plenty of Easter eggs, like Captain America cosplayers, a Groot T-shirt referring to him as Mr. Tree (because no one knows his name), and that giant Ant-Man head that tumbles across the event space when Kamala first (and most unexpectedly) displays her powers. 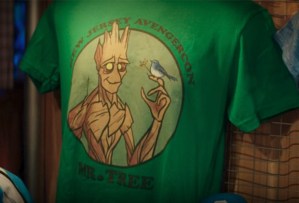 According to Ali, the original scene contained even more Avengers nods which got pared down before making it to screen.

“At one point, there was a guy dressed in full Korg (as in Thor: Ragnarok) cosplay and he couldn’t get through the security barriers,” she explains. “That’s was in a very early draft that no longer exists.”

Ali also suggested a “winged horse” as in the kind Valkyrie rides “so that we can represent everybody in the show,” but that also didn’t make the final cut. “The bananas first draft of AvengerCon, which will never see the light of day, had everybody in it,” she notes.

And while AvengerCon remains a fictional event in the series, the Ms. Marvel boss is hoping to one-day make it a real thing.

“I have an email drafted to [Marvel Studios boss] Kevin Feige, with our pitch for how we can make AvengerCon real in the real world,” she shares. “I still haven’t sent it, but I’m like, ‘We need to make this happen somehow.'”

What did you think of Ms. Marvel’s series premiere? Do you hope AvengerCon becomes a real-life event? Grade the episode below, and then leave your thoughts in the comments.