Ms. Marvel star Iman Vellani, who cosplayed as the titular hero when she was younger, now finds herself living out her childhood dream.

“I am constantly dreaming,” she tells TVLine. “It’s the only thing I’ve ever wanted in life, and I have it now, and I don’t know what to do with myself.”

The Disney+ series follows Kamala Khan, an imaginative teen obsessed with Captain Marvel who suddenly finds herself with superpowers. For Vellani, Kamala’s unexpected journey parallels her own.

“Kamala and I went on a very similar journey,” the actress explains. “Her getting her powers and me getting this part definitely went hand-in-hand, and just the entire journey of self-discovery and identity and reconnecting with your roots. I experienced so much and I learned so much just filming the show.”

Ahead of the first episode, which drops this Wednesday, TVLine hit up the cast and crew to discuss what to expect in the coming episodes and what it meant to have a predominately South Asian cast and crew on board. 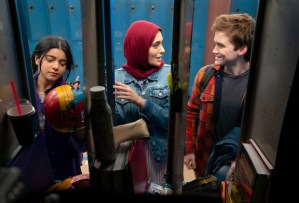 On the South Asian representation in Ms. Marvel…

IMAN VELLANI (KAMALA KHAN/MS. MARVEL) | I felt disconnected from my culture growing up. I was really dismissive about my Pakistani roots and being Muslim. I just didn’t think it was cool because I was so obsessed and enamored by American pop culture and Hollywood, and those two things just never went hand-in-hand. I didn’t like the Bollywood movies I was watching growing up, and I just thought it was so embarrassing. And now, here I am in Hollywood, working with just an insane [number] of women and people of color and Muslims and South Asians, and they are so in touch with their culture. It just really made me be so appreciative of that and see the beauty and see how these people are so cool, and they can be in touch with their culture, and they can have the greatest jobs in the world. I can do that, too.

MEERA MENON (DIRECTOR) | I wasn’t prepared for just how meaningful it would be to work with an all-South Asian cast and tell a story that felt so similar to not just my story, but the story of so many people… Just being caught between two sets — the expectation that’s set for you, and the thing that you really want to do — that is something I related to, and I think it’s the thing that most people can relate to… dealing with having a big, active imagination in a world that’s telling you that, “Well, that’s not realistic.”

SANA AMANAT (WRITER/PRODUCER) | There was a shorthand to the way that we were communicating with one another. It was just very easy. We can be very honest and frank with each other and just like, “Does this make sense? Is this going to be controversial or not?” I think that shorthand is something that really helped to make the entire process a lot smoother and a lot more fun because we could throw in some random South Asian music that only some of us knew and we got into and we’re very excited about. It certainly helped to have all of those different voices bring their own authentic experiences to the table.

ADIL EL ARBI (EP/DIRECTOR) | Kevin [Feige] wanted to do an adaptation of the powers, not a literal translation of the comic books, and the producers were also looking for her place in the wider MCU, connected with other movies and potentially other TV shows. In the script, it was only described as “hard light,” so we developed it together with the producers and the VFX team. We liked the powers of the comic very much, so we still wanted to have a reference to it. That’s why there is a version of embiggened hands, only so it’s with that light effect that you see in the pilot. You still have the body changing, which is also the story of teenagers whose bodies are changing. You have the same ideas of the comic book. Maybe there’s a variant of Kamala Khan in the multiverse who has exactly the same powers. Who knows?

MENON | In Episode 2, we toyed with different ideas because we weren’t sure where we were going to land. Since Episode 2 is very much about her figuring it out, it felt like the right approach, that we were just going to try a bunch of stuff, like have her shoot her hand out and make all kinds of different gestures in different directions and trip over things and smack Bruno in the face with it… trying all these different things to just collect material with which to be able to tell that story of a girl trying to figure this thing out, because we were trying to figure it out. 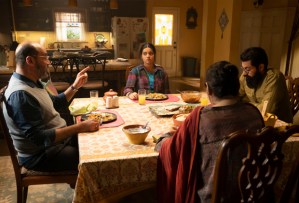 On Kamala’s relationship with her family…

MOHAN KAPUR (YUSUF KHAN) | [Yusuf] is all for anything that she wants. Muneeba is the one that puts father and daughter on track. He just dotes on his family, and mainly on Kamala because she’s the second child that happened after a very long gap — Aamir being the first [child].

SAAGAR SHAIKH (AAMIR KHAN) | Kamala is definitely a lot smarter than Aamir, but Aamir doesn’t believe that. Aamir thinks, “Hey, I’m older, so I’m smarter.” He’s a lot more aloof, and Kamala is really sharp, and so she knows how to play him. She knows how to tell him a thing, and she knows what he’ll believe. He cares about her [and] wants to protect her, but she doesn’t need the protecting. She’ll let him believe he’s doing his job while going around from the back door and doing whatever she wanted to do.

On Kamala’s relationship with her friends…

YASMEEN FLETCHER (NAKIA) | Being able to play such a strong and vocal character [like Nakia] who is opinionated, not afraid to say that and be sarcastic and poke around with her friends and just be super sure of who she is is so important for Kamala to see in her journey and feel more comfortable with herself. But also, hopefully, so many young viewers get to see such a young girl feel strong and sure of herself and confident and the way that she presents herself. [It’s] truly an honor, but it’s extremely important and something that I wish that I watched growing up.

MATT LINTZ (BRUNO) | [Bruno is] a genius: very smart, high IQ, and he lives on top of Circle Q. He’s got his little spot. It’s not the nicest spot. He has a pullout bed with probably not the softest pillows, but he has a workbench where he’s working on stuff. He’s an inventor. He loves doing that type of stuff and anything to help the people he loves.

RISH SHAH (KAMRAN) | He’s definitely the new boy in town and immediately shakes up all of the dynamics and the relationships that [Kamala] already has. With Bruno, for example, when she’s meant to be focusing on her training, and he comes in and just hits it off with Kamala. They can relate on a level that she hasn’t before with other people when it comes to sharing her culture and being able to code-switch with him and talk about Bollywood films… There is mystery to him. We’ll have to wait and see where it goes from there.

Are you looking forward to Ms. Marvel? What do you hope to see in the show? Sound off in the comments below.