The following contains casting spoilers from The Boys’ Season 3 premiere and Doctor Strange in the Multiverse of Madness’ mid-credits bonus scene.

Talk about a “super” coincidence.

One of the last sequences from Doctor Strange in the Multiverse of Madness and the cold open to Season 3 of Prime Video’s The Boys shared a surprise, A-list cameo.

Midway through the Doctor Strange 2 closing credits, the movie’s titular sorcerer was sought out by  Clea, a portal-hopping sorceress played by Academy Award winner Charlize Theron. (Watch a snippet of her cameo in the new trailer embedded below.) 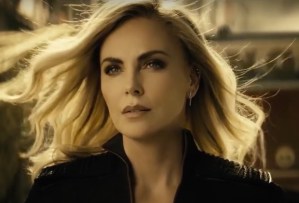 Weeks later, as Season 3 of The Boys opened, Theron showed up in the movie-within-the-series, Dawn of the Seven, as the Nazi supe named Stormfront (played on the series proper by Aya Cash).

Recalling Theron’s casting on The Boys, exec producer Eric Kripke told our sister site Variety, “Like most cameos on our show, it follows the rigorous and stringent screening process of whoever returns [executive producer] Seth Rogen’s phone calls…. She had just made The Long Shot with Seth, and to her incredible credit, she agreed to come on and help us out…. We were really lucky to have her.”

Be a part of the global phenomenon that changes the MCU forever ‼️ Get tickets NOW and see Marvel Studios’ #DoctorStrange in the Multiverse of Madness! Now playing only in theaters: https://t.co/VoGdr7T8HN pic.twitter.com/X6kxYTRHKZ

As for Theron also donning a supersuit for Doctor Strange 2, Kripke says he was as surprised as anyone by the coinky-dink, similarly secret casting.

“I did not know this Doctor Strange thing was happening,” he said. “But I was in the theater watching Doctor Strange with my kids and then that cameo came up, I was like, ‘Yes!’ Anything we can do to draw a line between us and Marvel is a good day.”

If you, too, fall into the Doctor Strange/The Boys Venn diagram overlap, did you get a kick out of experiencing Theron’s double-surprise casting?