The following contains spoilers from the June 2 Hulu premiere of The Orville: New Horizons (aka Season 3).

With the long-awaited launch of its third season, The Orville wasted no time exploring dramatically prickly territory.

Coming out of last season, in which the Kaylons declared war and were only (and barely) fended off by a last-minute alliance between the Planetary Union and the Krill, a certain tension on the bridge became apparent, primarily as Ensign Charly Burke (played by 13 Reasons Why‘s Anne Winters) directed much animus at science officer Isaac, due to his kind’s role in the slaughter of her best friend/former crewmate.

Isaac was also targeted by the scrawling of the word “MURDERER” on a wall in engineering, which was deduced to be the handiwork of… Dr. Claire Finn’s eldest son, Marcus.

Confronted, Marcus neither apologized to the onetime family friend nor was at all contrite. Instead, he assured Isaac, “This entire ship wants you gone…. I don’t want you here, and neither does anyone else.” The lad then punctuated his truth-telling with the harsh, “I wish you were dead.”

Up until this point, Isaac as an artificial lifeform maintained that being the target of such hate bothered him not at all. But in the wake of Marcus’ harangue, we saw the Kaylon privately leave some technological notes behind for fellow crew members, before saying, “I offer my best wishes to the Finn family”… and then ending his artificial life, by shorting himself out with an EM amplification module. 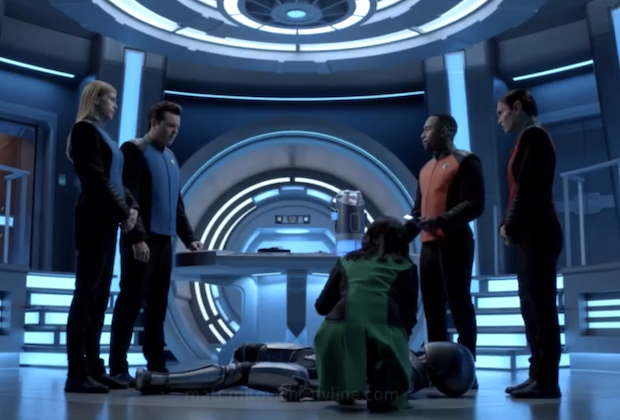 Later, as Ed, Kelly, John and Talla discovered and puzzled over Isaac’s grave mishap, Claire plainly observed that Isaac had killed himself by suicide.

Numerous somber moments followed, including a memorial service led by Captain Mercer… Claire finding a sad Ty interacting with “Isaac” on the holodeck… and Claire herself then breaking down as she used the same tech to revisit a past date with her onetime Kaylon suitor.

Broaching the topic of suicide, series creator and star Seth MacFarlane tells TVLine, “was a result of finding what the show was.”

“At the very beginning, in Season 1, there was really an attempt to exist in two worlds”– comedy and drama — “that in some cases was successful, and in some cases less so,” he observes. “As we went along, what we were finding was the same thing that the audience was finding, that what they were really responding to was the people. At the end of the day, you can have the flashiest sci-fi show in the world, but if it’s not about the people, then you might as well hang it up.”

As the Orville team picked up on viewers’ attachment to the characters, MacFarlane says, “We stopped pressuring ourselves to find spots to put in a punchline, and really just decided to tell science fiction stories that are meaty and have stakes, and let the comedy come from the characters where it’s appropriate.”

As the season premiere continued on, LaMarr during the course of pillow talk with a (literally prickly!) female alien experienced an epiphany, one that led him to discover a “back-up consciousness” embedded deep inside Isaac’s code.

Thing is, the only person aboard the ship capable of thinking four-dimensionally (or whatever) and rebooting Isaac with his consciousness intact was his chief detractor, Ensign Burke — and at first, she refused the captain’s order to perform the procedure. But after Marcus made an impassioned appeal, and against her own, personal judgement, she put her skills to work and brought Isaac back.

Afterward, Claire cued Isaac to acknowledge what he had done, but he kept reciting statistics about how his absence would not affect the crew’s efficiency. “Dammit, Isaac, you tried to kill yourself!” declared Claire. “And I need to know you’re not going to do it again!”

To drive home her point, she reminded Isaac of her own expertise in assessing the human condition, saying “the psychological damage to this crew would be much greater, if you succeeded.” Finally, Isaac got her point.

Surveying that heart-to-heart, Penny Johnson Jerald tells TVLine, “My takeaway from that is you really need someone to bounce off of in life. You are so lucky to have someone who’s willing to listen and not tell what you really want to hear, but tell you what you need to hear.

“It’s important to have someone in your life who is willing to be honest with you,” she added, “so that your healing is a journey of truth.”

It’s also important to have a cast that can effectively deliver such hard-hitting, human (or human-adjacent) stories.

“Penny’s amazing,” MacFarlane raves. “You can write dialogue for her that you could only write for like Charlton Heston or John Wayne, and nowadays, there are very few actors who can sell these kinds of lines.

“As a writer, she’s a gift because you can write something that would seem overblown and puffed up from other people, but Penny makes it real,” the EP adds. “There’s nothing you can’t write for Penny. She’s brilliant.”

What did you think of The Orville‘s return? Grade the episode below.