Romeo Escobar learned it the hard way: On Survivor, perception is always reality.

Despite his decent pre-merge game and wealth of relationships he accrued throughout, his game started to plunge once ally Tori left him out of a crucial majority alliance that kept him looking in from the outside for the remainder of the game. Despite that, the target never seemed to zero in on him, allowing the pageant coach from California to slide right to the end, where he went on to win the final immunity challenge and earn his spot in the Final 3. However, he and Mike Turner would ultimately lose the game to Maryanne Oketch in a 7-1-0 jury vote. (Click here for a full finale recap, and be sure to check out our Q&As with Maryanne and Mike.)

Here, Romeo talks to TVLine about “going from CEO to janitor” in the game, plus explains the reasoning behind his many hinky votes and why he was left out of that eight-person majority alliance.

TVLINE | So, you weren’t able to pull out the win, but how are you feeling right now about everything?
ROMEO ESCOBAR | I’m feeling good. The reaction has been positive. I mean, I only pay attention to the positive. I played the best game that I could play, given the cards that I was given at the second part of this game. I felt that for the first part, the pre-merge, I was at the top and then post-merge, I was at the bottom, so I could only do what I could do. Overall, I’m very proud of myself.

TVLINE | We saw how concerned you were about how your family was going to react once they learned about your sexuality. What has the response been like back home for you?
To clarify, I live my life as an out gay man. My immediate family knows about me, it was just other religious family members who I haven’t seen in years that were going to now know that I was concerned about. But the response has has been amazing. A lot of my family called me after that episode, and were crying and just telling me how proud they were of me, and how nothing changed and they still love me and support me. So, it’s been overall very positive. And the fans’ reaction has been extremely amazing and overwhelming, messages from kids, parents, people from the community, from all over the world just showing their support. That means the world to me.

TVLINE | What was the hardest aspect of this new era of Survivor for you?
Right from the brink when we got there, Jeff says everything that you know about Survivor, forget about it. “This is a new era, no rice, you have to earn everything,” and immediately I thought, “What the hell did I get myself into?” So just hearing him say that made me want to turn and run back to the boat. But just everything. The twists, the advantages, the fact that we had to earn every single thing, [including] our spot at the merge, everything was just harder, but at the same time, I expected it to be hard. One thing I went into Survivor thinking to myself was, “Just be flexible.” Because you’d never want to feel like the rug is being pulled right from under you. So that was my advantage, I was flexible.

TVLINE | Did you and Mike underestimate Maryanne?
I absolutely underestimated her. But also, my relationship with Marianne, we did have an alliance out there, but it was also a very emotional relationship in the sense that when it came down to it, my decision to bring her with me [to the Final 3] was more of an emotional one than a strategic one. I could not bring myself to cut this woman who reminded me so much of back home with the young ladies that I work with in pageantry, and also the fact that Marianne was one of my biggest cheerleader leaders out there. That you didn’t see. Every challenge, she was pushing me, supporting me. Every time I felt down she would offer words of encouragement. So when it came down to it, I thought to myself, if I lose, who would I have a less hard time losing to? 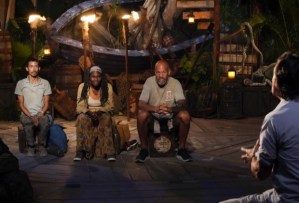 TVLINE | How confident were you going into that final Tribal?
I knew that I had no chance. Again, perception was reality. I, at that point, knew how people perceived me. And what they didn’t know was I actually had one-on-one connections with everyone. I had an alliance with Omar and Marianne called the Underbirdies instead of the Underdogs, because Omar hates dogs. I had an alliance with Jonathan that nobody knew about called Biggie Smalls — guess who was Biggie and who was Smalls? Nobody knew about that. I had a great relationship with Lindsay. We were the only ones sleeping in the shelter. Everyone else was sleeping either by the fire or on the floor separately. So, we would spend hours at night talking about guys, dating, food. I was very close to Tory, and they didn’t show that either.

I would always be pulled off to the side by everyone. And it was like, “We’re good. This person is going, you’re gonna get some votes from this person. But don’t worry, you’re the decoy.” Even Mike came to me at one point and said, “Hey, I feel really bad. I have to tell you something. I was talking crap about you in my confessional about you eating all the rice. I feel so bad.” I’m like, “Mike, I talked to a bunch of crap about you and Jonathan too, so it’s okay.” But at the end of the day, as a group, they didn’t realize how I was really playing. So, I knew at the end, with the perception that they had of me, I was essentially playing for second place going into final Tribal Council. I wasn’t surprised.

TVLINE | Wait… did you just say Omar, the veterinarian, hates dogs?
I don’t want to speak for him, but I remember when we were like, “Let’s come up with a name for our alliance, we’re the underdogs!” At that point, I didn’t realize that Omar was playing everybody. So, at that point, I was like, “He’s with me and Marianne, and we’re like the underdogs” and he was like, “Well, I’m not a fan of dogs. I like birds. Can we just call it Underbirdies instead?” So that’s what we went with. 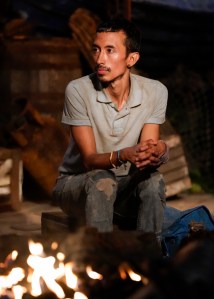 TVLINE | What was the deal with all of your hinky votes throughout the season?
I was playing with the cards that I was given, which was just to sit back and let these big people eat each other, and just keep going. One more vote, one more vote, and voting for a person even though I always knew who was going home. It was like, “Why is Romeo voting for the wrong person?” No. Omer would always pull me to the side and say, “Hey, this is the person that’s going home.” Mike and Jonathan would pull me to say, “Hey, this is the person that’s going home.” And I would be like, “Cool, I’m voting for them too!” No. If that main target pulled out an idol or played their Shot in the Dark and it worked, or if the main target had a secret advantage that none of us knew about and was saved, guess who was going home? Me. So what I had to do was throw a vote on somebody else. If that main target did something amazing at Tribal and saved themselves, the person that I voted for would have gone home and that was my strategy. It was never that I didn’t know what the hell was going on. I always knew who was going home.

TVLINE | Can you tell me about your highest high in the game, and also your lowest low?
My highest high was definitely pre-merge over at Ika when I was running that tribe. What people don’t realize is that every single member of Ika was in danger at some point except me. As you saw, no one ever talked about voting off Romeo. I knew that even if the Ika tribe was decimated, I would be the last man standing and I would make it to the merge no problem. I had a final three deal with every single member at Ika. I was doing the same thing that Swati was doing. The only thing is I didn’t get caught. So that was my high, being the CEO at Ika, and the lowest of lows was coming into the merge and going from CEO to janitor at Kula Kula, and being completely at the bottom. And it wasn’t that I was paranoid. It was that immediately I perceived that people just didn’t want to work with me. And what they didn’t show was why what happened. I was very close to Tori and she couldn’t justify in her head, “How’s my number one friends with my nemesis [Drea]? I can’t work with him.” So she left me out of that eight-person alliance and that was my demise.

TVLINE | What bit of advice do you have for any Survivor hopefuls out there?
The biggest advice is to remember that perception is reality out there. So even though the reality is reality, if people perceive you a certain way, that’s the way that the game is going to result for you. That’s what happened to me, so don’t let that happen to you. Make sure that you’re perceived in the way that you really are playing the game. And don’t let people make these false perceptions of you because that that will cost you a million dollars.