To say that Obi-Wan Kenobi’s titular hero is going through it an understatement.

In the first two hours of the Disney+ series (now streaming, with new episodes dropping every Wednesday), the exiled former Jedi Master is a shell of his former self, working a dead-end, day job as a meatpacker and haunted by nightmares of losing Anakin to the dark side at night, in the cave he now resides in.

In his solitude, Obi-Wan tries to commune with his old master Qui-Gon Jinn, played in the prequel films by Liam Neeson, but to no avail. (Yoda instructed him to do this at the end of Star Wars: Revenge of the Sith.)

He buried his lightsaber in the Tatooine sand and goes by “Ben,” eschewing most remnants of his Jedi past. Now branded a traitor, there’s the constant threat of the Inquisitors, the Force-sensitive agents tasked with hunting all remaining Jedi. Reva aka the Third Sister takes that mission to heart and acts so ruthlessly — she cuts off the hand of a woman who dared to talk back — that both the Grand Inquisitor and Fifth Brother warn her to dial it down. Reva, though, really wants to impress Darth Vader, and in turn amass more power within the Empire. 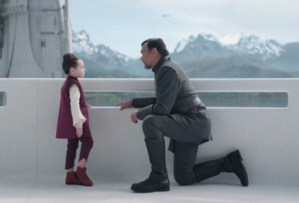 Nari, a Jedi who escaped the Inquisitors earlier in the first hour, reaches out to Obi-Wan for help — but Obi-Wan’s best advice to Nari is to bury his lightsaber, stay hidden, and live a normal life. When asked what happened to the once-great Jedi, Obi-Wan responds with a familiar line: “The time of the Jedi is over.”

Obi-Wan checks in on a young Luke Skywalker from afar, using a viewfinder, and secretly drops off parts the boy will eventually use to build the toys we see in A New Hope. This bugs Uncle Owen, who warns Obi-Wan to stay away. When the former Jedi reminds him that Luke, once he starts “showing,” will need to be trained eventually, Owen is quick to shut that down. (Side note: Owen’s “Like his father?” quip cuts deep.)

Disdain aside, Owen does cover for Obi-Wan when Reva interrogates him about the Jedi who evaded them earlier in the episode, and who they suspect is still hiding in the area.

Meanwhile on Alderaan, Luke’s twin sister Leia is a smart, self-assured, and mischievous princess who sneaks off to climb trees and try to identify the different aircraft flying about. She receives a gentle reprimand from her parents, Senator Bail Organa (Jimmy Smits, reprising his prequel trilogy role) and Queen Breha Organa, after verbally eviscerating a cousin who tried to shame her for being adopted.

Leia during one of her outdoor larks is kidnapped by Vect Nokru (played by Flea from the Red Hot Chili Peppers) and his associates, who take her to Daiyu. The young princess keeps up a brave face and talks back to her kidnappers, insisting her father will help her. Bail indeed reaches out to Obi-Wan via a hologram message, insisting that only he knows how important Leia is. The down-and-out Jedi is reluctant to step in because he’s not who he once was, but he can’t sit back any longer when he finds a dead Nari strung up for the world to see, and Bail in his cave begging him to find Leia.

As Bail points out, Obi-Wan couldn’t save Anakin (they both think Obi-Wan’s former apprentice died on Mustafar), but he can still save Leia. That convinces Kenobi to return to the desert, dig up his old lightsaber, and board a shuttle to Daiyu.

Daiyu is not a welcoming environment. There’s gambling on the streets, a homeless Clone War veteran asking for change, and a pink-haired teen trying to sell him drugs. A kid named Jayco offers to take Obi-Wan to a Jedi who helps people, but even that is a scam. Haja Estree (played by Kumail Nanjiani) uses magnets and remotes to pretend he’s a Jedi, so he can take money from desperate people looking to get off the planet. Even so, Obi-Wan uses the con man for information on where Leia’s kidnappers may have taken her, calling the young princess his “daughter.”

The Grand Inquisitor is furious with Reva for kidnapping a senator’s daughter in her bid to hunt down Obi-Wan, reminding her that she “came from the gutter” before joining the Inquisitors. Deciding to take Kenobi for himself, he dismisses Reva, who secretly alerts every bounty hunter of Obi-Wan’s presence in a plot to draw him out.

Obi-Wan does eventually find Leia in Vect’s drug lab, and they escape. With eyes everywhere, he buys her a cape for disguise, as well as the gloves she just had to have. (She may be on a strange planet, but she’s still a princess.)

Leia catches on that Obi-Wan is hiding something and is suspicious of his claim to be a Jedi since he won’t make her “float.” She then suspects he’s one of her kidnappers when she sees his face on the BOLO Reva transmitted all over. It’s now panic mode for Obi-Wan who must chase after the tyke while being shot at by the many bounty hunters closing in on the big payday. Leia leaps between two buildings and falls, forcing Obi-Wan to finally use the Force to prevent her from hitting the ground hard. That was proof enough for Leia that he’s a Jedi, and they both head for safe passage off the planet.

Alas, their planned egress is swarming with Stormtroopers. Enter Haja, who offers another way out. He might be a con man, but he’s con man with a conscience. Reminding Obi-Wan that he’s not alone and there are other Jedi out there willing to help, Haja sends both him and Leia to an empty cargo hold that’s leaving the planet soon. 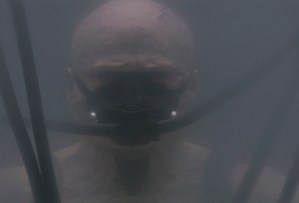 Reva, though, already traced them there, having been alerted by the blaster battle moments before. Obi-Wan sends Leia to hide while he wields his lightsaber, readying himself for a hell of a battle. That’s when Reva shouts the game-changing news at her prey: Anakin is still alive. As an emotionally conflicted Obi-Wan processes this in his hiding spot, the Grand Inquisitor pops in to tell Reva to step aside. But she refuses to let him steal her credit for capturing Obi-Wan and drives her lightsaber through his gut. Obi-Wan and Leia escape during the commotion, and Reva is last seen angrily shaking her fists and yelling at the sky as they fly away.

Aboard the spacecraft, Obi-Wan is clearly shaken up at the news that his former apprentice still lives. Cut to a murky shot of Darth Vader submerged in a bacta tank, aided by a breathing mask and other tubes penetrating his body. It’s giving Hannibal Lecter vibes, and it’s super creepy.

What did you think of Obi-Wan Kenobi’s first episodes, and the drama surrounding not Luke but wee Leia? Submit your grade below and sound off in the comments.