BET+ announced its robust summer slate Wednesday, which includes the highly anticipated Martin reunion and new seasons of All the Queen’s Men, Family Business and The Ms. Pat Show.

Streaming Thursday, June 16, Martin: The Reunion is a 90-minute special hosted by comedian Affion Crockett that “takes fans back to the iconic Martin living room set and reunites the original cast — Martin Lawrence, Tisha Campbell, Tichina Arnold and Carl Anthony Payne II — for a once in a lifetime celebration” of the Fox sitcom, which ran for five seasons between 1992 and 1997. Per BET+, the retrospective will be complete with “musical performances and drop-ins by celebrity super fans,” as the stars revisit “hilarious moments, iconic characters… and pay an emotional tribute to the late, great Tommy Ford.”

Scroll down for additional BET+ release dates (as well as synopses for new series and films), then hit the comments and tell us which of the following titles you’ll be streaming this summer.

THURSDAY, JUNE 2
📺 I LOVE US | Comedy duo Kym Whitley and Kountry Wayne take audiences on a hilarious trip through the funniest and most outrageous clips on the web; all episodes available at launch.
🎥 OUTSIDERS | A Black high school student finds himself under suspicion after his classmate’s mysterious disappearance. Rutina Wesley (Queen Sugar), Taryn Manning (Orange Is the New Black), Shane West (ER), Skylan Brooks (Empire) and Clark Backo (Letterkenny) star.

THURSDAY, JUNE 16
🎥 BLOCK PARTY | The comedy centers on Keke McQueen (Dear White People‘s Antoinette Robertson), a recent Harvard grad who is eager to ditch her hometown of Grand Rapids, Mich., for her dream job in Atlanta. But when Keke discovers that her once-super-sharp Grandma Janice (Oscar nominee Margaret Avery) is showing early signs of dementia, Keke puts her career at stake in order to save her Grandma’s renowned Juneteenth block party. In the process, Keke falls back in love with her hometown.
📺 MARTIN: THE REUNION (see above) 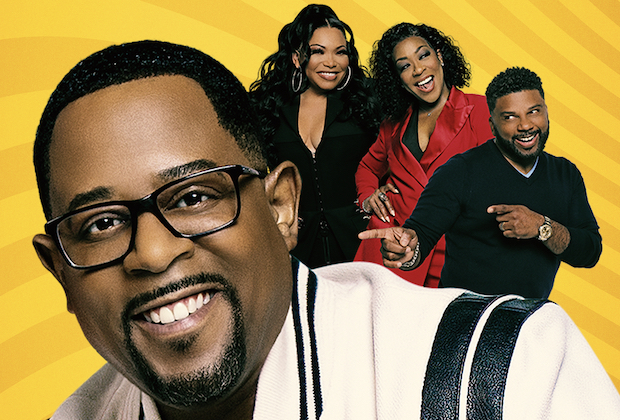 THURSDAY, JUNE 23
🎥 BID FOR LOVE | After being injured and doing a bid in prison due to Memphis (Ruthless‘ Blue Kimble), her former drug trafficking boyfriend, Sasha (Saints & Sinners‘ Dawn Halfkenny) comes out into the arms of Malik (The Oval‘s Adrian Lockett). Malik spoils her with gifts and gets her a job at his real estate office. However, Malik constantly uses his gifts and her past against her to keep her in his grasp. A love-struck Sasha falls head over heels for Malik who slowly attempts to alienate her from her friends and family and secretly plots against her. Her therapist, Dr. Simone (The Ms. Pat Show‘s Tami Roman) and unexpected new friends open her eyes to her history of relationships and give her advice on how to deal with them and get her life back.

FRIDAY, JULY 1
📺 THE BLACK HAMPTONS | A family drama set in the quaint town of Sag Harbor (known as “The Black Hamptons”) follows the brewing feud between the Brittons and Johnsons where the difference between old money and new money is very apparent. Lamman Rucker (Greenleaf), Vanessa Bell Calloway (This Is Us) and Elise Neal (The Hughleys) star; all episodes available at launch.

THURSDAY, JULY 21
🎥 GHOST IN THE HOUSE OF TRUTH | Bola Ogun (Chewing Gum‘s Susan Wokoma) is a dedicated counselor, who facilitates reconciliation sessions between convicts and the victims of their crimes. When her own daughter goes missing, her belief in forgiveness is tested.