The almighty (if unpredictable) Thunderbolt may sound a bit different when he next materializes on DC’s Stargirl.

TVLine has learned that for Season 3 of the CW superhero team-up series, Robot Chicken co-creator and prolific voice actor Seth Green will help bring the pink, wish-granting genie to life. 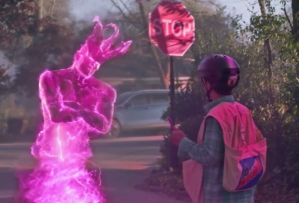 Green thus succeeds Jim Gaffigan, who voiced Thunderbolt in a pair of Season 2 episodes in which Mike (played by Trae Romano) unwittingly conjured, met, and then labored to precisely guide the powerful imp.

In Stargirl‘s Season 2 finale, Mike and his friend Jakeem (Alkoya Brunson) brought Thunderbolt to the epic, downtown clash with Eclipso, where the genie ultimately turned the bested Big Bad into “toast” — as in a slice of charred bread. (He’s quite literal that way!)

In the wake of that team-up, Mike suggested to Jakeem that while Stargirl (aka stepsister Courtney), Wildcat et al continue on as the new JSA, they and Thunderbolt should create their own heroic “thing.”

Green’s myriad TV voice-acting credits include (but are far, far from limited to) Family Guy, the Guardians of the Galaxy TV series, Teenage Mutant Ninja Turtles and Hulk and the Agents of S.M.A.S.H.

DC’s Stargirl is set to premiere its third season in the fall, airing Wednesdays at 8/7c (where it will lead into Kung Fu Season 3).