Casey and Brett are both back in the Windy City for the big “Stellaride” wedding in this Wednesday’s Chicago Fire season finale (NBC, 9/8c) — but only one of them is likely to stay put in Chi-Town.

With another separation looming for the couple, as Casey prepares to go back to Oregon while Brett remains in Chicago, the pair are at a crossroads. And Severide and Stella’s nuptials only intensify the questions Casey and Brett have about their own future.

Below, co-showrunners Derek Haas and Andrea Newman talk about bringing back Jesse Spencer, how Casey has changed during his time away and why love might not be enough for Casey and Brett.

TVLINE | What were the conversations like with Jesse about returning? Did you have to do much convincing?
DEREK HAAS | Oh yeah, Andrea and I and [executive producer Michael] Gilvary, basically, whatever it took, we were like, “Jesse, you’re coming and doing this finale.” So we pretty much begged him, pleaded and offered him the moon so that he would come back and do the finale. But he’s the greatest and he was in even before we started all of that. The character pledged he would be best man at Severide’s wedding. We’re so grateful to [Jesse] that he would come back and honor that pledge. 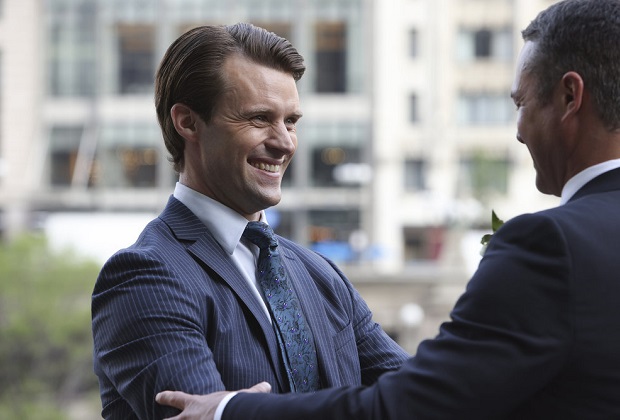 TVLINE | What made now the right time to bring him back? And under what kind of circumstances does Casey come back?
ANDREA NEWMAN | It was the perfect time for the reasons Derek was just talking about, the fact that he had promised to be Severide’s best man after the engagement and he’s a man of his word. So he’s back for that. And it’s also a kind of critical time in his relationship with Brett. They’ve just spent a bunch of time together, and now they’re going to have to part ways again because they live in these separate places. So he comes back with her, and they attend this wedding together and get to have that moment everybody has at a wedding where you look at somebody else’s relationship and that makes you reassess your own. So that’s where they’re at in that finale.

TVLINE | Brett’s been away for quite a bit of time with Casey, off screen, and we haven’t really seen how that’s impacted their relationship. How has their relationship grown as a result of that time together?
NEWMAN | With the two of them, as we’ve seen in the past, they get closer with every moment they spend together. They’re really in love. But the question is sort of bigger than that. It’s bigger than the time when they’re together. It’s more about the time when they’re apart right now and the fact that they have to be apart to each be able to have their own lives. So that’s the crux of the issue in the finale, too.
HAAS | And I think when you have a long distance relationship, the goodbyes don’t get easier. They get harder. And so we’re going see a little of that.

TVLINE | It’s been so long since we’ve seen Casey. Has this experience in Portland, with these two boys, in a different field of firefighting, changed him at all when he comes back?
NEWMAN | Well, it’s interesting you asked that because Brett says something up to that point exactly, which is that seeing him there in Oregon, it feels like the place that he was meant to be, that role of father. He’s always wanted to be a dad. He established that, I think, way back even in the pilot maybe, certainly early on, that that was something he cared very much about. And so now he’s in this new place, fighting wildfires and being a dad, and it feels like it’s just the right fit. So we’ll see a Casey who is in a very happy and content place in terms of life and the big question mark is his relationship with Brett.

TVLINE | Coming off this episode, are you hopeful that we’ll see Casey again next season? Or is there a sense of closure to Casey’s story with this finale?
HAAS | Door’s always open on our end. I have no idea what the future holds. It’s kind of like that with a bunch of our characters from the past, where we just love the actors, and we understand when a show goes on this long that people aren’t going to make a lifelong commitment to us. We tend to love to have characters come back from the past, so there’s no ending, as far as our show is concerned, for Casey. 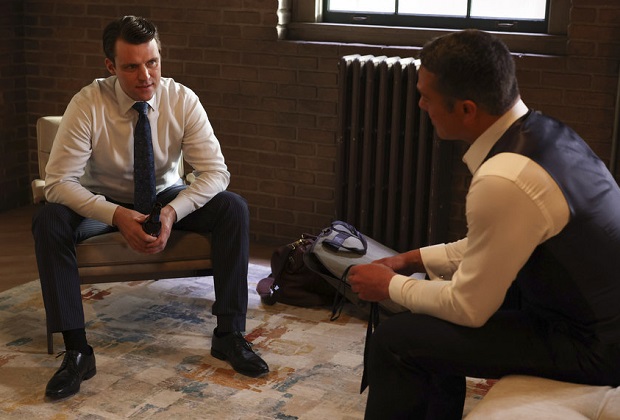 TVLINE | Are we going to get Casey making good on his word to throw Severide that crazy bachelor party?
HAAS | Well, everything’s not going to go as planned. So we’re not going to necessarily get a bachelor party. But we’re going to have pretty much a crazy, crazy wedding.
NEWMAN | Yeah, literally not one thing goes as planned for this wedding.
HAAS | And I will say they should not have put Tony and Capp in charge of anything. We’ll just say that. I don’t want to spoil anything. [Andrea laughs] They’re really good at fighting fires. Other than that, I don’t know that they should be in charge of anything.

TVLINE | What kind of a season finale are we in store for? What kind of note does it end on?
HAAS | You know how you do your [May Sweeps Scorecard] checklist? We’re checking all the boxes! Every box is getting checked in some way, shape or form. That’s not how I wanted to do it. I wanted it to be super happy, everybody cheering at the end. It’s all hugs and kisses, and the wedding goes exactly as planned, and every one of our characters shows up and doesn’t miss it. But Andrea said that she couldn’t stand that.
NEWMAN | Don’t listen to him! Now he’s not speaking. [Laughs]