This Monday night in the NCIS Season 19 finale, Parker got a blast from his past, while Jimmy and Jessica grappled with the future.

The finale opened with a birdwatcher/photographer laying witness to a woman (played by The Fosters‘ Teri Polo) being abducted along her jogging route by a masked man –except, based on texts he then received/sent, the photog was expecting this.

When the alarming photos are anonymously emailed to NCIS, Kasie is able to ID the woman as Vivian Kolchak, a former FBI agent — just as Parker walks in to discover his ex-wife’s face plastered on the monitor! As the team buckles down to locate Parker’s ex ASAP, it is gleaned that the photog was, Frank Ressler, a former G-man himself — Parker’s disgraced former partner, in fact. But by the time the team closes in on Ressler, his has been murdered, in his garage. Parker confessed that he had come looking for his former partner the night before, but no one was home — a claim that starts to look shaky when Parker’s DNA is found under Ressler’s fingernails.

Having been benched earlier by Vance, Parker is brought into NCIS for questioning as a murder suspect, though Vance and McGee obviously don’t really think he offed Ressler.  Vance agrees to “forget” the number for the DOJ for 48 hours, while the team  investigates what’s really going on. To that end, Jessica and Nick question Vivian, who managed to escape her captors and flag down a passing motorist. Her faintly remembered clues lead the team to an abandoned pet store, where Jess and Nick find confirmation that Vivian had been held there — along with a scrawled “NEVERMORE,” as in calling card of the vexing “Raven” adversary who taunted NCIS earlier in the season.

FBI Deputy Director Sweeney storms NCIS with two agents, looking to bring in Parker, but Vance insists he doesn’t know where Alden is. Meanwhile, Jess, Nick and Tim see off Parker, who has a go bag and is sneaking away with Vivian for the time being, to where they spent their honeymoon. But as Vivian fishes in the backseat for an old mix tape of theirs, we see her secretly text a mysterious someone, “It’s done. I have him.” 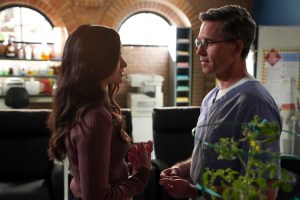 Elsewhere in the finale, the distribution of new disclosure forms at the office led to Jess seeing that Jimmy had listed her as a “workplace relationship.” When Jimmy was finally able to explain himself, he pretends to dismiss their time spent together as just “a couple of coffee dates, right?” But Jess counters that amid the kind of year we’ve had, “Why deny the good? And we have something good… don’t we?” As they inch closer, Jimmy asks if what they have is worth “disclosing,” and is cued to pull Jess in for a kiss to find out — after which she asks for another, “to be sure.”

What did you think of this largely Gibbs-less Season 19? Vote in the poll below, then weigh in on the finale’s twists both ominous and romantic.