Nothing kills the buzz of a freshly earned Homecoming victory quite like a potential breakup with your long-term girlfriend.

And yet, All American‘s Spencer James found himself in that world-rocking conundrum at the end of Monday’s Season 4 finale, which concluded with Spencer and Olivia on the precipice of ending things after Olivia revealed she’s writing an exposé on Spencer’s corrupt GAU football coach.

Granted, the teens didn’t officially call it quits before credits rolled, leaving open the possibility that Spencer and Olivia will make things work in Season 5 — and according to star Daniel Ezra, Spencer won’t let Olivia go so easily.

“In that moment, he wants to fight for his relationship. I think it’s the most important thing to him,” Ezra tells us in the video above, when asked if Spencer might, on any level, feel that breaking up with Olivia is the right solution. “[Having] her now, suddenly, in direct conflict with his football dreams… I don’t think he ever entertained any scenario where the two of them would be on actual opposing sides.”

But now that Wade Waters and (possibly) Coach Garrett have proven they don’t exactly have Spencer’s best interests at heart, Spencer might want to keep his Crenshaw and Beverly Hills relationships more intact than ever.

“He can trust the people that he’s been able to trust from Day One — Coop and Jordan, all those people, they’re such a tight-knit group,” Ezra continues. “It’s the people outside of it that are the problem.” 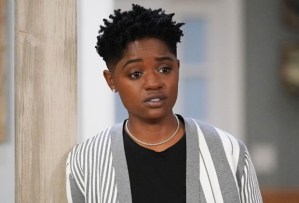 The season ender was also a big episode for Coop, who ultimately chose not to pursue romance with Skye or Patience. As Coop’s portrayer Bre-Z tells TVLine, it’s “for the best” for her character to stay single at the moment.

“Choosing herself is important,” Bre-Z says. “From the beginning, we’ve watched her choose everyone else. It’s time. It’s way overdue… Respectfully, I think Coop loves them both, but you’ve got to take care of yourself.”

What’s more, without a love interest in the picture, Coop can focus more on her burgeoning passion for criminal justice, which Bre-Z admits is the storyline she’s “most excited about” heading into Season 5.

“I want to see her do something different,” the actress continues. “I want to see her develop more skill in dealing with people and dealing with situations, and I think working with Laura Baker will definitely help her do that, change her perspective a bit.” (That said, she’s not ruling out an eventual return to music for Coop.)

Of course, we didn’t get to discuss the finale’s other big happenings with Ezra and Bre-Z: Grace and D’Angelo are engaged! Jordan and Layla kissed! (But now Clay’s back!) After you’ve watched our Q&A above, grade the All American finale in our poll below, then drop a comment with your reactions! (With reporting by Andy Swift)