Kingdom Business is in the business of making messy television, and I’m here for it. The gospel drama, which is now streaming on BET+, features a charcuterie board of gripping drama: murder, blackmailing, strippers, sex scandals, dramatic slaps, a killer soundtrack and Michael Beach being trifling.

The show follows Denita Jordan (played by legendary gospel singer Yolanda Adams), the Queen of Gospel Music at First Kingdom Church and Kingdom Records in Atlanta. Despite her many successes, her label is on the brink of financial ruin, and her newest album isn’t pulling in enough funds to keep it afloat. She needs a hit, stat.

Although the whole season is available to stream, we’re giving you a rundown of the first four episodes, which you can grade in the poll below.

THE INCITING INCIDENT | Rbel (Serayah) is a stripper at Vivide Gentleman’s Club alongside her best friend Dani (Shuford Marie), who was gunned down by an unknown assailant in a black vehicle. Rbel honors her friend at her memorial service by singing a gospel song (with help from a choir), and the video goes viral.

She catches the attention of Taj (Chaundre A. Hall-Broomfield), Denita’s son and the Head of A&R at Kingdom Records, who wants to sign her. Given her spotty background, though, Denita is quick to shut that down. Taj really believes in her talent and approaches Caesar (Michael Jai White) to sign her to his progressive label, Redeeming Records.

LOVER’S QUARREL | Caesar has major beef with Denita, and for good reason. They dated before she married Bishop Calvin Jordan (Michael Beach), and things got serious. But then she got pregnant, had a secret abortion and cut him out of her life. Even worse, she erased his songwriting and producing credit from her album, One Moment From Glory, which went on to be a huge success. Her star rose while he faded into the background, and now he’s fighting her on multiple fronts to regain some of that glory.

For one, he’s filed an injunction on the album, temporarily barring her from performing her most popular songs on the tour that was supposed to save Kingdom Records. He has proof that he wrote and produced that album in the form of a letter by Denita which states that very fact. He’s also throwing his energy into making Rbel a big star. Although Rbel pushes back against his efforts to change her image, she did quit her job at Vivide and is focusing on building her career. 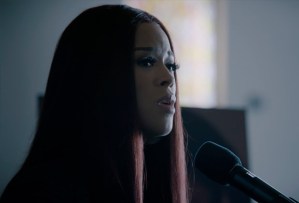 A DARK PAST | Rbel still carries the childhood trauma of finding her mother Raven dead in the bathtub. Raven was also a gospel singer who worked with Caesar and was on the brink of major stardom. However, Denita was threatened by her and did everything she could to stifle Raven’s career. Caesar vows to never let that happen again, even convincing Rbel to re-record one of her mother’s songs.

A DIRTY BISHOP | If Michael Beach is going to do one thing, it’s play a man you love to hate. Calvin is married to Denita, but he was sleeping with Dani before she died. Rbel found a jump drive with an incriminating video of him and Dani in a hotel room, which she gave to police — but not before she was assaulted in her own apartment by a masked assailant searching for that evidence.

Calvin looks like a good suspect for the murder, especially since a vehicle registered to Kingdom Records went missing and was later found torched (along with any possible DNA evidence). Trying his best not to get caught, he called up Vivide owner Dex (Sam Malone) to make sure there were no videos of him at the club and asked his friend, the chief of police, for any update on the case. The chief said they have a suspect and would be making an arrest soon, but didn’t reveal who they were circling.

Did I mention that Calvin is also sleeping with Sasha (Tamar Braxton), who works for Kingdom Records? This man hooked up with her in a dressing room while his wife was nearby in the same building rehearsing for her tour. The gall.

DENITA’S BAD DREAMS | Denita’s rotten deeds are seeping into her dreams, and she’s been having some nightmares as a result. Deacon D’Wayne (Kirk Franklin) offered some interesting interpretations: The spotlight moving and leaving her in the dark represents God’s anointing, which no longer falls on her. The black bird is someone she shared God’s faith with, who is no longer there, but they left a remnant in the form of the feather.

Knowing that Rbel is Raven’s daughter, she must represent the feather, while Raven is the black bird. Right?

FAMILIAL WOES | Denita and Calvin’s daughter CJ is depressed after experiencing her seventh miscarriage. When she tells her father she needs help, his answer is to pray with her. But prayer alone hasn’t been working, so she sought out the church counselor, and that seems to be helping.

Taj’s championing of Rbel didn’t sit well with his mother, who promptly fires him. His girlfriend Essence (La’Myia Good) quickly hires him to produce her sexually charged “gospel” song, which he is not a fan of.

She’s also been trying to have sex with him — they’ve been together for three months — but Taj used to hoe around and has been celibate for the last few years. After almost kissing Rbel, however, those principles buckled like Party City paper plates under a summer BBQ spread. Episode 4 ended with him rushing home and humping Essence on their white couch. Seriously? Not even putting down a towel?

What did you think of Kingdom Business’ first four episodes? Grade the season so far below, and then leave your thoughts in the comments.