Guess who’s back in the house! No, really, Drag Race fans were left to ponder that very question after a sneak peek suggested that a mysterious ninth queen would be joining the first winners-only edition of All Stars.

Meet the Queens of Drag Race All Stars 7 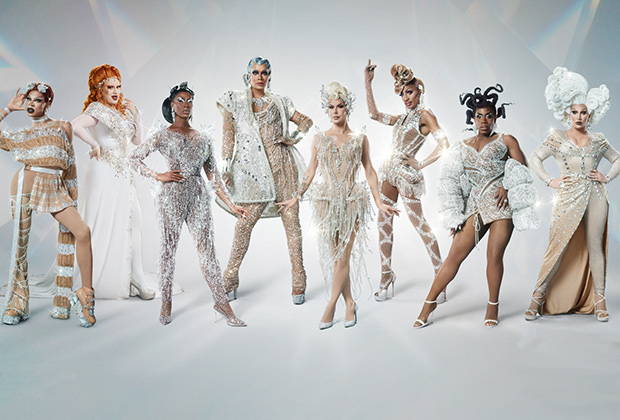 So, who pulled off this Alexis Carrington-inspired werkroom entrance? As many an eagle-eyed tweeter predicted, the queen under that enormous hat was none other than Raven, the runner-up of both Drag Race Season 2 and All Stars Season 1. “I identify as a winner,” Raven explained while the eight pre-announced queens looked on with understandable confusion.

But let’s not drag out a joke any longer than we must; Raven’s arrival was merely a set-up for a scripted confrontation with Mama Ru. (“What part of All Stars all winners do you not understand?!”)

The gags, or rather the “gagoonery,” continued with the reveal that there will be no eliminations this season. Instead, the top two queens of the week will each receive a Legendary Legend Star. In addition to a cash tip, the winner of the lip sync then gets to block one of their fellow queens from receiving a star the next week. (Am I crazy, or is that kind of cutthroat? These queens may be getting along at the moment, but once they start blocking each other, it’s going to get ugly.) It all leads up to the finale, where the queens with the most stars will compete in a lip sync LaLaPaRUza for $200,000 and the title of “Queen of Queens.” In other words, Mario Party rules are in effect.

MINI CHALLENGE | In a move that wouldn’t sit well with Vanessa Williams, no sir, All Stars went with the best first, kicking off the season with a reading challenge. And because these queens operate at a winner’s reading level, we were treated to quite the show. Shea Coulee called out The Vivienne as this season’s “diversity hire,” Yvie Oddly went straight for Raja’s age, Monét X Change hailed Jaida Essence Hall as the “Zoom winner,” and Raja had just one thing to say to everyone: “B-O-O-G-E-R-S. Boogers!” But it was Jinkx Monsoon who most successfully lampooned her sisters with a series of smart, savage reads, earning a well-deserved win.

MAXI CHALLENGE | For their first maxi challenge, the queens had to write and perform verses to Ru’s new song “Legends.” And if it hadn’t already occurred to you, one thing became abundantly clear when these girls hit the stage: there isn’t a filler queen in the bunch. They all have Big Drag Energy, they’re all at the top of their game, and any one of them has a shot at winning. So the performance was great. Hell, the whole episode was great.

And you know what else? It’s refreshing to watch a season where the queens seem to genuinely respect each other’s work and take every opportunity to lift one another up. Maybe it’s because they all have crowns, but you don’t get the sense that anyone came with something to prove. And even when Jaida admitted to feeling unworthy, the queens rallied around her with words of encouragement. Kindness, what a concept!

RUNWAY | The queens continued to shine on the runway, showing off various regal looks in the “I’m Crowning!” category. Raja set the bar high in a white Baroque-style gown; Jinkx apparently mashed up Queen Elizabeth, the Virgin Mary and Angelina Jolie…’s leg; Monet drew inspiration from ’90s fashion, topping off the look with a crown in her hair; The Vivienne went for a “queen of earth” vibe; Yvie proved that melted crayons can be sexy, not that I had any doubt; the judges were buzzing about Jaida’s beehive of dreadlocks; and Shea channeled Queen Nefertiti in a stunning African ensemble.

LIP SYNC | Shea and Monét were named the top two queens of the premiere, earning them each their first star. Then came a lip sync battle to — I kid you not — Ella Fitzgerald’s “Old MacDonald Had a Farm.” It was wacky, it was hilarious, it was… tailor-made for Jinkx, frankly. That said, both Shea and Monét took full advantage of the song’s absurdity to flex their comedic muscles.

Ru announced Shea as the season’s first lip sync winner, giving her the power to block one queen from nabbing a star next week. And that queen was… Trinity!

OK, that was a busy premiere. And I didn’t even get to talk about Naomi Campbell judging the queens in a surprise walk-off. Or RuPaul’s performance of “Give ’em What They Want.” Or the mere presence of angel-on-earth Cameron Diaz! A lot can happen in 90 minutes.

Your thoughts on the All Stars 7 premiere? Grade it below, then drop a comment with your take on the season’s new rules.