Saying goodbye is never easy, even when you’re stuck inside a virtual reality prison such as the Hub.

In the penultimate episode of Made for Love‘s second season, Herbert and Fake Hazel (Fazel? Let’s go with that) shared a tearful goodbye, as Herbert, who was no longer accepting Gogol’s treatments for his cancer, appeared to at last succumb to his illness. Heading into the finale, the real Hazel was still displaced from her body, having been pushed to the back burner by the copy of her consciousness. Is her dad really dead, and what’s to come for the real Hazel and Byron? Let’s recap.

Hazel has a vision of her dad, as Fazel appears all over TV. Herbert, now a manifestation of her consciousness, tells her that Fazel was pretty convincing. She must overthrow her consciousness somehow if she wants to reclaim herself, and with that, the two head out to sift through all of the junk and emotional barriers jammed inside her head. At least we get to spend more time with Ray Romano.

Fiffany explains to Bennett and Jay that Gogol keeps bodies safely stored inside “infinity capsules,” until an alternate universe can be created for them. Herbert’s body is, of course, among them (yay?), and Fiffany knows they must stop Byron and Hazel’s “others” before they do anything that can’t be reversed or fixed by science.

Hazel and her dad pass by some “what-if doors,” which show them a world where her mother didn’t die. But as they start to bicker, Fazel shows up and Hazel takes off after her.

Meanwhile, Fazel goes to Zelda’s tank, but the talking dolphin isn’t fooled. As Zelda distracts her, Herringbone and Fiffany sneak behind her and inject Fazel with a needle. She immediately collapses. (We’re just going to pretend we didn’t hear the phrase “Uncle H-Bone.” Agreed? Shudder.) 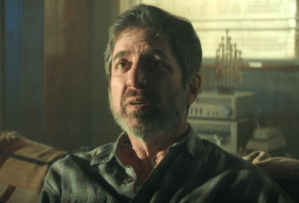 Jay captures Fake Byron (Fyron? Eh, doesn’t have the same ring to it) and delivers him to Fiffany. Bennett then lets it slip that Herringbone was the one who sold Fiff out to Byron, and he’s the reason why she was put inside the Pasture Cube. “But you knew that already, right?” he asks her. Nope!

Hazel and her dad soon find the real Byron trapped in the white space where their consciousnesses used to live. He explains that he tried to destroy the chips, but it was too late. Hazel knows he’s hiding something. Meanwhile, Fiffany, Bennett and Uncle H-Bone (Ack! I’m ruined!) monitor Hazel’s brainwaves. Fiff tells Jay she knows Zelda loves him. Does he love her? He’s caught off guard by the question. (BUT HE TOTALLY DOES, right?)

Hazel confronts Fazel about killing her father. “You only think about what you need,” Fazel tells her. “I am you. Except without all the f–king baggage.” The two tackle each other and launch down a huge desert dune. They beat the hell out of each other, just as a door to Fiffany’s lab opens in front of them. They both fight to be first through the door, until Fazel chokes her. Then, Hazel admits her counterpart will probably lead a better life than she ever could. As Hazel seemingly allows Fazel to win the war, she stabs her fake self in the back with a shard of glass, and reclaims her body.

Back at the house, Fiffany tells Hazel that they have Herbert’s consciousness stored, and that they haven’t brought Byron back yet. Oh, and also: Hazel’s pregnant. Fiffany says Hazel can certainly walk away… or she can stay and fix things. Take control of the Hub without Byron in control. Will she stay or will she go? 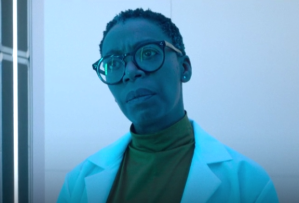 Later, Herringbone admits to Fiffany that he sold her out, and promises that he’ll never do it again. He apologizes and appears to be sincere about it. She forgives him and decides against sending him back to the Pasture Cube. But, she says, she’ll have to figure out another way to punish him.

Hazel visits Jay, and tells him that she lost the FBI tracker. She offers him a pill, and orders him to take it and go home forever. But if he tries to attack Gogol again, she’ll make sure he’s recaptured, and next time, there’ll be no escaping the Hub. He takes the pill from her hand.

Six months later, Hazel is showing and… back with Byron?! He asks her how her day was, but “it’s none of your business,” she replies. He’s in bed reading a parenting book. “You’re going to make a great dad,” she tells him. His eye-twitches, and we see that the real Byron is still trapped deep inside Fake Byron’s consciousness.

Did Gogol’s creator get what he deserved? Does Hazel seem… kind of evil now? Grade the finale and season below, then drop your thoughts in a comment!