Law & Order‘s Season 1 finale found Frank working case that hit close to home as both he and Kevin investigated the murder of a fellow police officer.

THE CASE | A woman, who was being harassed by some guy, hears shots fired and found a different man bleeding out on the ground. Frank and Kevin arrive, and Frank quickly realizes that the victim was someone he knew — a fellow cop named Jimmy Doyle.

Jimmy’s girlfriend, who is Black, had been dating him for three years. The only person who ever harassed her about being with a white cop was her ex-boyfriend, who happened to be nearby at the time of the shooting. But he was just doing some light stalking when he heard the gunshots and saw a man running from the scene seconds later.

That man happened to be Scott Gleacher, a finance bro who refused to talk without a lawyer. You just know dude has some skeletons in his closet.

NOT THAT INNOCENT | The detectives interview Regina, a 19-year-old that  Scott was messing around with. When Kevin inquires about the bruise above her eye, Regina’s sister Kendra tells him not to worry about it, and shuts down additional questions about Jimmy. 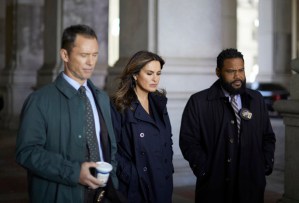 That’s when Kevin and Frank turn to SVU’s Olivia Benson (guest star Mariska Hargitay). Benson reveals that she previously interviewed Regina while being treated at the hospital for the injury above her eye, and Regina claimed that she hit her head on a table. The NYPD captain promises to check in with Regina to see if she could get anything on her connection to Jimmy.

The second Maroun secures Scott’s immunity deal, he lays out his version of events. He planned to meet up with Regina but was stopped by Kendra, who told him to leave. He claimed she “was going nuts,” flashed a gun and threatened to kill him if he ever went near her sister again. That’s when Jimmy interrupted, and they both took off. Seconds later, Jimmy was shot.

Kevin and Franklin then interview Kendra, who denies getting into a fight with Scott, as well as encountering Jimmy. But police find blood on her jacket and shoes, and she is arrested on the spot.

FINDING A MOTIVE | McCoy, Price and Maroun go over everything they have on the case, which was not much. It’s clear that Kendra shot Jimmy, but they still don’t know why since she was a good student and had no priors. When McCoy says she should have gone to the police about her sister’s assault, Maroun points out that some people just don’t trust the cops.

The case was even more complicated given that Kendra was in a heightened emotional state, and Jimmy exacerbated the situation by yelling racial epithets at her.

Meanwhile, the police are heavily invested in making an example of Kendra, and Frank even confronts Price about only charging her with aggravated manslaughter.

THE TRIAL | Kendra’s defense attorney points out that both Kendra and Scott ran, but Doyle only went after Kendra. That’s when Price reminds the courtroom that Kendra was the only one holding a weapon.

Defense then call a detective from Internal Affairs as a witness, and Price calls a meeting in the judge’s chambers to discuss. The defense intends to prove that Doyle was racist, and that he confronted Kendra because of his racism, which provoked his own death. Price pushes back on that, assuring that Doyle only got involved because she was holding a gun. But the judge rules that Doyle’s relationship with race was integral to the case, giving the green light for IA to take the stand.

On the stand, Det. Michelle Pierce confirms that Doyle was investigated twice for assault and battery complaints from Black men, with both referencing his use of the n-word. Price counters that Doyle being racist in both cases didn’t even matter since that was 10 years ago, and Doyle never received disciplinary action. (Who else side-eyed Price for referring to the Black complainants as “degenerate criminals?”)

Maroun suggests they call Doyle’s girlfriend to combat claims of him being racist, and she paints him as a loving boyfriend who was the exact opposite of that. Defense then brings up a video Doyle sent her in which he references the Rolling Stones’ “Brown Sugar,” a song Mick Jagger confirmed the band will never play live again because of its racist lyrics fetishizing Black women.

Kenda, during her testimony, claims that Doyle kept screaming racial slurs at her, and she ran because she’d seen what happens when Black people comply. She brings up her cousin, Ray, who complied and was still assaulted by police. Kendra also reveals that she told Doyle she had a gun, and said he charged at her with “this look in his eyes.” She thought he was going to shoot her and she didn’t want to be another George Floyd.

During cross examination, Nathan zeroes in on the fact that Kendra left Doyle on the pavement to bleed to death instead of helping him. But Kendra maintains that she was afraid, and that’s why she ran.

What did you think of Law & Order’s Season 21 finale? Grade the episode below, and then share your thoughts in the comments.