The prevailing thought on CBS’ The Equalizer has been that Robyn McCall is too tough to be taken down because she used to be in the CIA and Mel and Harry always have her back.

The fascinating thing about Sunday night’s Season 2 finale, and the message that kept creeping up after Bishop was murdered, is no one is safe. This was especially true given that every time Robyn attempted to take down Quinn, she put her life and the lives of those around her in danger.

For instance, when Carter brought in Quinn’s Cuban connect Delgado for questioning, there was a moment where it seemed like Robyn had been shot. Thankfully, she hadn’t, and the fake shooting was performed to get Delgado to reveal the devious plan Quinn had been devising with him. It worked, of course, and Carter, Robyn and the CIA learned Quinn was planning to drop a dirty bomb somewhere in New York. Carter even convinced Robyn to come back to the CIA temporarily to head the task force working to stop Quinn’s bombing.

Robyn was just about to tell Aunt Vi and Delilah about the case, and why it had been taking her away from them, when a black SUV T-boned into the side of Robyn’s car. A group of men then jumped out of the truck, snatched Robyn from her car, put a hood on her head and kidnapped her. A horrified Aunt Vi and Delilah screamed out for Robyn, but it was too late. She was gone and Quinn was likely behind the whole thing. 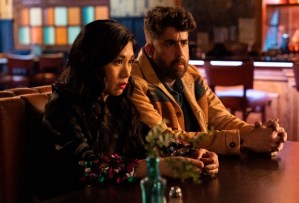 Not only was this scary for the two people who love and care about Robyn the most, but it was tragic because Delilah and Robyn had turned a corner in their relationship. Delilah’s bestie Vera had become the victim of pornographic cyberbullying. Her vengeful and petty ex-boyfriend texted the entire school a naked picture of her, and it embarrassed her so badly, she considered suicide.

After hesitating, Delilah turned to her mother for help and Robyn’s vigilante team, Mel and Harry, fought hard to erase the picture from the internet and create a fresh start for Vera. The girl eventually came clean to her parents about texting the photo to the boy instead of having sex with him, and this allowed them to press charges. That’s when Dante stepped up and arrested the boy in front of everyone at school and turned the tables on him. 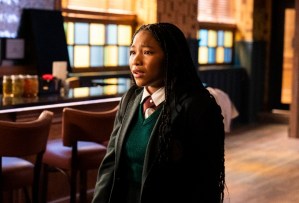 Delilah, meanwhile, not only convinced Vera to step away from the ledge and fight back, but she defended Vera against their classmates’ ridicule and reminded them that they could be next. The students rallied around Vera and suddenly, Delilah understood Robyn, and realized it feels good to help those in need who can’t rely on traditional methods to save the day.

Now that Robyn’s life is in danger, Delilah might become too afraid to fight the good fight. Luckily for fans, The Equalizer has been renewed for Seasons 3 and 4, so we all know Robyn will save herself or be rescued — we just have to wait and see how.

What did you think of the Season 2 finale of The Equalizer? Are you pumped about Seasons 3 and 4? Grade the closer in our poll, and drop your thoughts in the comments.