Chicago P.D. returned this week with a new episode that found Ruzek and Burgess grappling with how the trauma Makayla experienced will affect her later. The pair spoke to a counselor, who concluded that she’s coping well for now, but there’s a possibility that memories of losing her family and being kidnapped may return.

Concerns about adolescent trauma spilled over into their latest case, in which an older couple was found brutally murdered in their bed. Before their deaths, they had dinner, were read a bedtime story and given a bleach bath. Those specific details matched a 20-year-old cold case involving a young boy named Daniel, who was found at a rest stop after being abducted and forced to bathe in bleach. Daniel’s story was never corroborated — police had no birth records to go on, and his parents’ identities remained a mystery — casting doubt over what he told authorities.

Now grown up and married with kids, Daniel recalled curtains decorated with flowers and birds and “pink dust” that fell from the ceiling. Burgess didn’t fully believe his story since it sounded so much like a child’s tale. How much of it was a real memory? 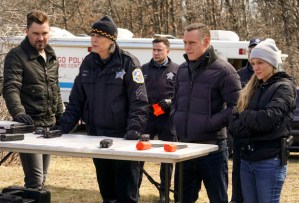 Burgess visited the doctor who initially evaluated Daniel. He still believed Daniel’s story, and that Daniel came from a loving family and was not abused before being kidnapped.

After a long day, Burgess returned home to the sweet sight of Makayla and Ruzek watching home videos on his cellphone. For anyone who needed a boost of serotonin, the image of him dancing with his daughter in a sparkly pink cape surely did the trick.

As Ruzek put Makayla to bed, Burgess poured over Daniel’s old drawings. One stood out: a house with pink stuff in the attic. She returned the active crime scene and realized the “pink dust” Daniel spoke of was insulation. From there, Intelligence concluded that the culprit accessed their victims through the attic, meaning they had intimate knowledge of the building. The squad was looking for someone who worked on the building’s construction.

Burgess and Ruzek eyed a suspicious-looking man who appeared to be casing one of the newer buildings. Ruzek ran his license plate and discovered that Jim had several prior arrests for disorderly conduct and trespassing. This man was a peeping tom and a carpenter with access to the crime scenes — he had to be their guy.

Given that everything they had on Jim was circumstantial as best, Voight urged the team to dig deeper. The squad did their best to break Jim — each interrogating him individually — but he never cracked. Daniel was even called in with the hopes that seeing Jim may jog his memories. It did not. But in a small break for the case, he recognized the inn that was posted on the evidence board.

Platt and Voight instructed a search team to look through the surrounding woods for anything that seemed out of place. It was in those same woods that Burgess and Ruzek found the RV from Daniel’s story. The vehicle contained photographs of a young Daniel, confirming Jim as his abductor. Plus, the search team found the remains of Daniel’s parents. Jim was going away for a long time.

When the dust settled, Burgess and Ruzek finally told Daniel what really happened to his parents. His memories of his parents were real, and Jim murdered them. The detectives also showed Daniel a home video of his family’s camping trip just before the deaths, which further proved that he came from a loving family.

With the case closed, Ruzek and Burgess decompressed at Disco Bob’s house. Bob, who’d been away for seven weeks, decided to remain in Florida to pay off his debts. As a result, Ruzek wanted to buy his dad’s house for Makayla and Burgess to live in. When Burgess pushed back against this, Ruzek noted that Makayla’s horrific memories could come back. Why not give her great memories to protect her from that?

How do you feel about Ruzek buying his dad’s house for Burgess? Sound off in the comments below.