Anyone familiar with the 1990 made-for-TV movie A Killing in a Small Town, or any true-crime reenactment series on basic cable, knows Candy Montgomery’s murderous story.

What made Monday’s debut of Hulu’s five-day limited series Candy, starring Jessica Biel, different and more engaging was, well, Jessica Biel. Delivering what is arguably the strongest performance of her career, Biel pulled viewers in by creating a captivatingly layered and troubling performance filled with arrogance, regret, guilt and duplicity.

At first, Candy emitted all the cocksureness of an alpha, stay-at-home mom. She made a casserole for her church, shuttled her kids and one of their friends to Bible study and later led the class herself. In fact, her lesson about the “good little tree” felt like a metaphor for her challenging but mundane life. Rocking a curly ‘do and glasses like Sophia Petrillo but strutting around like Blanche Devereaux, Candy commanded every space she inhabited and dared someone to say otherwise. (Is her body too ripped for a mom of that era? Yes, but it’s best to ignore that.)

Candy’s smugness soon fell away after she left the church to stop by the Gores’ house. Christina Gore is the best friend of Candy’s daughter Becky, and the little girl was staying at Candy’s house for a sleepover. Becky had so much fun with her, Candy volunteered to keep the girl a second day and pick up her bathing suit for a swim lesson she had later on. Candy was greeted by Christina’s maladroit mom Betty (played with awkward perfection by Melanie Lynskey), and then… we didn’t see what happened next. 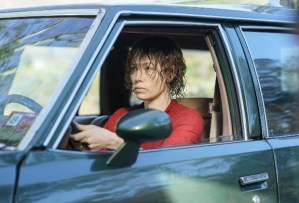 Instead, an hour later, Candy was shown running from Betty’s house, jumping in her car and driving away. Candy’s forehead was bleeding, her hair was wet, her glasses were missing and she behaved like someone in a fugue state. Even without seeing Betty’s dead body, there was no doubt Candy had killed her. All movement in the house had ceased, and her baby daughter remained in her crib crying.

Everything shown from that point was either Candy moving as fast as she could to cover her tracks or Betty’s husband Allan (a dowdy Pablo Schreiber) frantically trying to reach Betty to no avail. Candy’s husband Pat (Veep‘s Timothy Simons) sensed something was wrong with his wife, but assumed she’d grown tired taking care of the kids all day.

The fact that neither he nor the children noticed that Candy stopped to vomit between cars after they all left the movies punctuated both her loneliness and her frightening ability to deceive the people around her. Schreiber’s Allan, in contrast, expressed concern for Betty’s wellbeing a little too late, and it was unclear if he thought she had harmed herself and the baby or just felt remorse for leaving Betty for an out-of-town work trip.

Either way, it was a good thing Allan trusted his instincts and asked a neighbor to check on Betty because when Candy killed her — in self-defense or otherwise — the Gores’ baby was left all alone in her crib, covered in feces, and Betty’s bloody and brutalized body was left to rot just a few rooms away.

What did you think of the Candy premiere? Will you keep watching? Grade the opener in our poll, and drop your thoughts in the comments.