As “Sonny Boy” began, Strand threw one “traitor” after another over the side of his much-ballyhooed Tower. But that was just a precursor to what was to come as extras soon were swapped out for series regulars.

After Victor’s right-hand man Howard was found to have a walkie-talkie in his room — a big no-no to his paranoid boss — Strand tasked both him and John Sr. with finding the suddenly missing baby Mo. Because that made sense, sure. Anyway, if Howard didn’t retrieve the tot before sunrise, it was off the roof for him!

Shortly, John Sr. came upon June with the baby in a soon-flooded tunnel that had more walkers in it than exits. She’d have to call her partner in mutiny for help, he told her. So reluctantly, she phoned Grace… just as Howard caught the duo baby-handed. Not that Strand saw it that way. In his estimation, John Sr. had recovered Mo, not Howard. So he challenged John Sr. to prove his loyalty by sending Howard plummeting off the roof.

At that, John Sr. confessed that he’d planted the walkie-talkie in Howard’s room. Cool, said Strand, in essence. Send him over the edge, anyway, or he’d bring up June or Grace to take a flying leap. Faced with that impossible proposition, John Sr. sent Howard hurtling toward his doom, then dove into a bottle of booze himself.

Later, Victor remanded Mo to his sole custody and charged John Sr. with keeping anyone from taking the baby. In response, John Sr. knocked out the megalomaniac and delivered the tyke safely to Morgan outside the Tower through a cockamamie scheme that involved Howard’s suit of armor and enough time to say long goodbyes but not enough to smear oneself with walker goop. Mmkay. 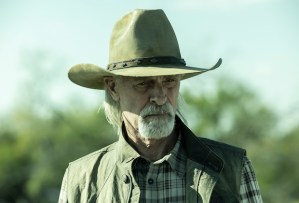 As Morgan stalked away with his namesake, John Sr., who already had radiation poisoning a la Charlie and had been newly bitten by a walker, stayed behind to get devoured by the undead. (I know he was trying to buy Morgan some time to get away, but damn. If you were Morgan, wouldn’t you have at least tried to suggest your pal let you put him down less painfully?) Finally, over the ever-present walkie-talkies, Strand warned that if Morgan attacked the Tower, he would retaliate — he did, after all, still have under his roof Grace and June, not to mention Wes as an apparent successor to Howard.

So yeah, all that happened. What’s your take on “Sonny Boy” and its casualties? Who will even be left at season’s end?