The Equalizer‘s Robyn McCall has taken on a lot of tough cases. It wasn’t until this Sunday’s installment on CBS, however, that she had to contend with a client who wanted her help based on his dreams and visions.

The man’s name was Julien Thibideaux (The Vampire Diaries‘ Yusuf Gatewood), and he was convinced, based upon the details that appeared in his mind, that his younger sister Calista was in danger. Robyn didn’t want to dismiss Julien, but she was also understandably skeptical. She then turned to Harry, Mel and Det. Dante to help her do some digging to figure out if Julien was onto something or on something.

It turned out that Julien was right about almost everything. For instance, when Robyn stopped by Calista’s apartment for a wellness check, the man with the rather large scar on his face that Julien envisioned attacked Robyn and she fought him off. Harry, meanwhile, found ATM footage of Calista withdrawing $1,000 and giving it to a drug dealer. Robyn roughed up and interrogated the drug dealer, and he confessed that he sold Calista a gun, not drugs.

Why would Calista need a gun if she wasn’t in danger? And why hadn’t her editors at the magazine she worked at heard from Calista in days? The case became more complicated when the scar-faced man turned up dead in the trunk of his silver Mercedes. Police detained Julien for questioning, but his comments about his visions, dreams and erratic behavior made Dante wonder if Julien should be institutionalized. 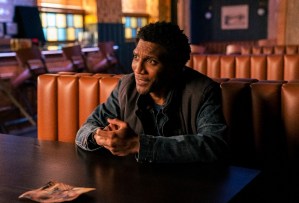 Making matters worse, Julien’s police record painted a picture of an unhinged, recovering pill addict whom Calista had filed a restraining order against in the past. Julien stuck with his story and when Mel staked out the bad guys’ lair, she found illegal guns with the serial numbers scratched off. Mel also ran into Calista at the hideout, but a frightened Calista didn’t know who Mel was, and fired her gun at Mel before running away.

More digging revealed that Calista was looking for a Serbian gangster named Milosz, the guy behind the guns, and that somehow the guns were connected to a community activist named Rosa, the very woman Calista had been interviewing for an upcoming profile.

But Calista never completed or turned in the piece and instead, seemed to shift her focus to Milosz. Calista thought Milosz was working with a councilman to get the firearms, which had been obtained through a gun amnesty program, scraped of their serial numbers, and resold to the Serbian mafia. As an added twist, the councilman was innocent — but Rosa wasn’t. 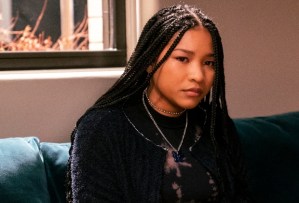 Rosa and Milosz were just about to kill Calista when Robyn and Mel came to the rescue. Dante and his men arrested Rosa and brought Julien to the crime scene so he could be reunited with Calista. The two hugged warmly, and Robyn realized she needed to check on her family, especially because she was still carrying around emotional baggage from her father’s death.

Aunt Vi told Robyn her father adored her and his death wasn’t her fault. Just as Robyn let Aunt Vi’s wise words sink in, Delilah walked up and asked to talk to her mom alone. This is when Delilah tearfully confessed that she hated lying to her dad about what Robyn really does, and worse still, she worried that Robyn could die working as a vigilante for justice.

What did you think of this very instinctive and emotional installment of The Equalizer? Drop your thoughts in the comments.