The following contains spoilers from the May 6 finale of CBS‘ Magnum P.I.

As CBS’ Magnum P.I. closed out its fourth season — and with a renewal yet to be formally announced— could that very final moment between Thomas and Juliet have been… “a kiss before goodbye-ing”?

Friday’s finale opened with Higgins once again considering her feelings for Thomas, and the advice she had gotten Dr. Ogawa, before marching over to Magnum’s in the morning to say her peace…. that is, until she saw Thomas’ ex-girlfriend, Lia, emerge from the bedroom. Waylaid by the unexpected awkwardness, Higgins tabled the topic at hand for much of the episode, as she and Magnum got busy in another way, by helping Gordo track down his kidnapped ex-wife and rescue her.

Once that risky business was masterfully dealt with and Beth was saved — and after another bit of drama involving Suzy going into arrest after birthing her and Rick’s daughter (tl;dr everyone’s OK!) — Higgins retreated to an impossibly picturesque patio just off of the hospital maternity ward. Magnum followed, asking, “Why’d you leave?”

“I just suddenly got a bit overwhelmed,” Juliet claimed, before coming clean: “Actually, I’m lying, I’m not alright. There is something else. When I came to talk to you today, it wasn’t about work. I wanted to tell you something, then I saw Lia there and couldn’t.”

But as Thomas explained prior, a tipsy Lia simply crashed in his bedroom that night (instead of driving), while he slept on his couch. It was all innocent. No spark rekindled.

“Now I know that nothing happened,” Juliet continued, “and I have to tell you, because it’s just going to haunt me otherwise…. I have feelings for you. I’ve tried to deny it, and I just can’t anymore.”

The admission was met by… silence and a curious smile, at first, leaving a slightly embarrassed Higgins to quip, “I bet this is doing wonders for your ego.”

“No, it’s not that,” Thomas countered. He then explained, “When you were in the wine cellar yesterday, I wanted to spend the day with you, because I wanted to say the same thing…. I have feelings for you. I think I have for a while, I just didn’t know it.”

From there, hearts on sleeves, the two did a bit of a dance about the whole “I’d hate to lose our friendship!” thing.

“Of course, I have my reservations…,” Juliet said, half-heartedly.

“I don’t want to risk losing our friendship, our partnership,” said Higgins. “Maybe we shouldn’t go there.” 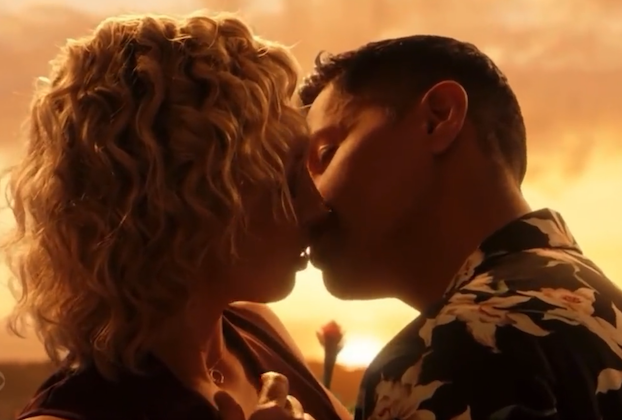 But then their respective sets of lips said very differently, as Thomas pulled Juliet into a lonnnnng, warm kiss. And in the wake of the wowza liplock… the screen faded to black, the season over!

Magnum‘s Season 4 numbers are “OK” — it ranks ninth in audience and 10th in the demo out of the 14 dramas that CBS has aired this TV season. But series lead Jay Hernandez just weeks ago suggested, “We’re golden” when it comes to securing a Season 5. “I think you could bank on that.”

“The numbers are great, it travels well internationally…,” he explained. “So yeah, I think we’re in good shape. And you know what, [The Powers That Be are] happy with the show. They loved this season, a lot of the stories they were really digging. And the episode I directed, they loved to the extent that I’ve already been asked to direct another one next season.”

Yet Hernandez also shared his opinion that any “Miggy” hook-up would come “at the end of the show. Not the end of the season, but the end of the entire show. So, I don’t think it’s going to happen anytime soon. I think that tension and the dynamic between Higgins and Magnum is a big part of why the show works, and if you take that away and they become a couple, the show loses a lot.”

What do you think happens next? Grade the finale and Comment!