Pullman porters were an intricate part of the Black experience in America and Canada for the better part of 100 years, and BET+’s new drama The Porter is out to spotlight and celebrate the men who did so much with so little.

Based on true events and real people, The Porter premiered this Thursday and is set in 1921 Montreal. It’s a period of time that allows the limited series to ambitiously tackle the Jazz Age, flappers, bootlegging, unionization, racism, colorism and civil rights.

Junior (played by EP Aml Ameen, I May Destroy You) is the tale’s leading man, and this husband and father does it all. He plays the trumpet, bootlegs, and works as a porter for a fictional Canadian railroad. To prove just how versatile Junior is, The Porter opened with him standing up to a racist cop. But as soon as the cops accepted their bribe and left the Stardust (a nightclub where Junior and his coworkers hang out and decompress), Junior started doing the Charleston and blowing his horn.

The next day, he kissed goodbye his gorgeous wife Marlene (The Umbrella Academy‘s Mouna Traore), promised to get enough money to fix their crumbling roof, and sadly observed his son Teddy, who suffers from autism. Once outside, Junior, his best friend Zeke and a dozen other porters strutted to work with dignity and pride as Caribbean music set the vibe for a very impressive and cinematic scene. 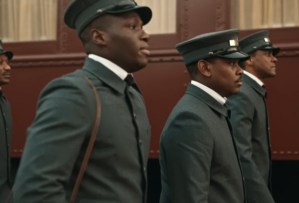 Alas, this montage (and the jazzy one at the show’s start) proved to be anomalies in an otherwise glacial premiere. On the one hand, it was fascinating to hear one of Junior’s colleagues, Henry, talk about wanting to better himself and his station in life by taking the exam to become a train engineer.

The flip side of that was seeing Henry get racially degraded by a white passenger and his young son, not long before he was forced to perform a task that led to his violent and heartbreaking death. How could viewers truly mourn Henry when we barely got a chance to know him? Worse still, Junior was off selling bootleg liquor instead of helping Henry and possibly preventing his death.

When Zeke later attempted to stand up for Henry’s rights (because the railroad company wanted to heartlessly charge his family for the cost of his uniform), the owner dismissed the argument and instead decided to open an investigation into Zeke’s stance on unions.

Turns out Zeke was pro-union, and was eventually shown attending a lecture by A. Philip Randolph (the man who successfully organized the Brotherhood of Sleeping Car Porters in 1925, the first labor organization led by Black Americans).

Junior’s fate was a lot less successful, in contrast, and by the end of the premiere, his bootlegging connection from Chicago had double-crossed, attacked and kidnapped him. Talk about a cliffhanger.

What did you think of The Porter premiere? Will you keep watching? Grade the opener in our poll, and drop your thoughts in the comments.