Star Trek: Strange New Worlds premiered Thursday with a thought-provoking episode that found Pike (played by Anson Mount), Spock (Ethan Peck) and La’an (Christina Chong) disguising themselves as inhabitants of the planet Kiley, where Number One (Rebecca Romijn) was being held captive.

The pre-warp society somehow got their hands on advanced warp technology — a potentially catastrophic situation, given that two major factions were at war.

After successfully breaking Number One out of her cell, Pike diverted his attention to convincing both groups to put down their weapons and just talk to each other. In an eye-opening speech, Pike warned faction leaders that their current fighting would lead them down the same path as Earth: a second civil war that became a eugenics war, and then World War III, which resulted in a massive loss of life. 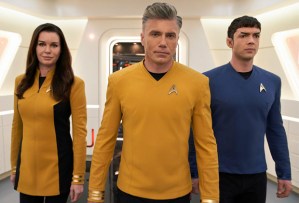 Pike illustrated his points with footage from those past wars, including a direct reference to the real-life Capitol riots on January 6, 2021. Henry Alonso Myers, who serves as co-showrunner alongside Akiva Goldsman, says there were discussions about including the incident in the sci-fi series.

“We don’t want Trek to be alienating, but also, the values of Trek are pretty straightforward,” Myers tells TVLine. With Pike’s speech, “we’re saying that this is a time of a lot of conflict. We felt like it couldn’t hurt to put that in as a reminder that the path of conflict has a consequence. It wasn’t a scolding or a shaming thing. It was more trying to say that this is a message that we hope will have resonance for today.”

With the option to either to blow each other up or come together (and join the Federation), the people of Kiley opted for diplomacy over destruction. According to Myers, that optimistic ending represents Strange New Worlds’ central thesis.

“We’re trying to present the message of hope. Ultimately, that’s what this show is about,” Myers says of the show’s tone. “We also don’t want to shy away from social issues because that was what Star Trek has always been about. Star Trek has never shied from this stuff, and to do that doesn’t feel like the show to us.”

Setting itself apart from Star Trek: Discovery and Star Trek: Picard, which take on a serialized approach to story, each episode of Strange New Worlds is a new, standalone adventure.

“It’s not that the other shows aren’t hopeful. I think that they just have different modes,” Myers notes. “We really wanted to be in the mode of the old shows where they are exploring… We’re doing a different style of adventure every week.”

The show went into production at the start of the pandemic in 2020, which Myers says partially influenced the overall tone.

“There was just this need to have something hopeful to look at, to feel that the future wasn’t necessarily a terrible place, [and] that maybe it’s a great place,” he explains. “That’s one of the central tenets of the Roddenberry ethos — this amazing future where people from all different races and creeds and planets somehow find a way to work together. Yes, there’s conflict, but they find a way to work through [that] by coming together. It was a very nice, hopeful place to be during a challenging time.”

How did you feel about the Star Trek: Strange New Worlds series premiere? What do you hope to see this season? Grade the episode below, and then share your thoughts in the comments.