Jean-Luc and the Star Trek: Picard crew are racing to save the future of humanity — but it might require some personal sacrifice.

As Thursday’s Season 2 finale opens, Jean-Luc and Tallinn are puzzling over Agnes/the Borg Queen’s declaration that there must be two Renées: one who lives, and one who dies. While Seven, Raffi and Rios try to stop Soong, Tallinn transports to the site of Renée’s launch — and Jean-Luc goes with her. He sees a look in her eye, and he can tell she’s planning to sacrifice her own life to save Renée’s. But she pushes him away: “I don’t need saving. I never have.” Inside Soong’s lab, Seven, Raffi and Rios just find a recording of Soong’s voice — he’s actually at the launch site, too — along with a squad of robotic drones poised to take Renée’s rocket out of the sky.

Tallinn dons a flight suit and sneaks in with the other astronauts, cornering Renée and telling her she’s in danger… and that she’s been watching her for her entire life. Raffi manages to hack into Soong’s drones, and Rios flies them into each other, destroying them and neutralizing that threat. But Soong gets to Renée at the launch site and touches her skin with a fatal neurotoxin, bringing her to her knees. Jean-Luc cradles her in his arms as the rocket launches, but the dying Renée reveals she was wearing a hologram disguise. It’s actually Tallinn! She encourages Jean-Luc to forgive himself for his mother’s death before succumbing to the neurotoxin. 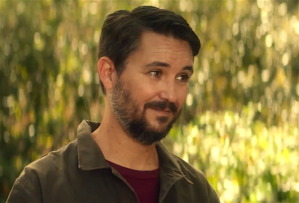 Soong watches angrily as the real Renée broadcasts from the rocket, and he gets even angrier when his computer starts deleting all of its files. It’s the work of his daughter Kore, who tells him she’s making “a new future for us both.” (But we see Soong retrieve a confidential folder from his desk labeled “Project Khan.” Hmmm.) Kore gets a message directing her to a street address, but it’s not from Q. It’s from… Wesley Crusher! He explains he’s now “a traveler of all space and time” who’s in charge of the Supervisors, keeping the spacetime continuum intact. Not bad for a lowly ensign, huh? Wesley invites Kore to join his team, though he can’t guarantee her safety. But that doesn’t stop her: They shake on it, and he transports her away to a new life.

It starts to dawn on Rios, Seven and Raffi that they’re stuck in this timeline now, but Rios seems happy with Teresa and her son. (Plus, Seven plants a kiss on Raffi!) But as Jean-Luc walks through his chateau and places that old key behind a brick so his future self can find it, he’s greeted by a beaming Q. The trickster god thinks now that Jean-Luc has accepted his fate and forgiven himself, maybe he can find love. Q is “moving on,” aka dying, and he doesn’t want Jean-Luc to end up along: “Even gods have favorites, Jean-Luc. And you’ve always been one of mine.” He has one final surprise: He can send them back home to the future —although he can’t resurrect Elnor, like Raffi wants. Rios decides to stay behind with Teresa in the past, though, and he exchanges warm hugs with the crew as Q says a final goodbye to Jean-Luc: “Farewell, mon capitaine.”

They end up back on the Stargazer bridge as they were in the premiere, under fire from the Borg Queen. Jean-Luc cancels the auto-destruct and tells his crew to cease fire, directly addressing the Borg Queen. She takes off her mask — and yep, it’s Jurati. She explains that a nearby space anomaly is about to release enough energy to wipe out the whole sector, and she took control of the ships to harmonize their shields to counter the blast. Jean-Luc puts Seven in charge, and she orders the fleet to allow the Borg to control their ships. The shields are harmonized, forming a protective force field — and hey, Elnor is on the Excelsior! (Rios staying behind opened up a spot for him after all.) The anomaly fires off a massive blast of energy, but the force field absorbs it, and it ends with no harm done. Agnes the Borg Queen requests membership in the Federation to watch over it, though. This is an episode of unlikely alliances, isn’t it?

Jean-Luc shares a drink with Guinan, who points out she has a photo of Rios and Teresa up in her bar. They formed a medical charity together, and her son grew up to use alien technology to clean up the planet’s ecosystem. Rios eventually died in a Moroccan bar fight, she reports: “His last breath was into a cigar.” Jean-Luc and the crew toast “to family, because that’s what we are, after all.” But he has some unfinished business: He heads back to his chateau, where he finds Laris. She restored his greenhouse, but he doesn’t want to look back. “Better to look forward,” he says as he asks her for a second chance — and the two hold hands.

Alright, Trekkies: Give the Picard finale a grade in our poll, and then beam down to the comments to share your thoughts.