Girls5eva is back for an encore on Peacock — but can the girls keep up the momentum?

Thursday’s Season 2 premiere picks up with the girls fresh off their big Jingle Ball triumph, which landed them a deal with Property Records, aka the Property Brothers’ record label. “We are officially in album mode,” Wickie declares, and they go into their first label meeting with a ton of confidence and a new anthem Dawn wrote titled “Momentum.” Their label rep Tate is totally excited and hopes they can finish their new album in six weeks so they can launch it along with the Property Brothers’ new line of scented hammers. The girls are a bit worried about the quick turnaround… but they say sure! 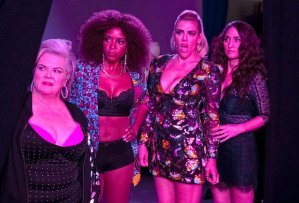 The girls prepare to unveil a stripped-down version of “Momentum” at a showcase for the label’s new talent, and they meet a boy band who “got discovered on TikTok doing pushups to the audio of Reagan being shot.” Turns out that boy band is managed by Girls5eva’s sleazy old manager Larry, who informs the girls that this showcase is actually a competition for the label’s attention. That inspires the girls to switch it up and do the club version of “Momentum” instead, but even that’s not enough to keep the label executives from checking their phones. So Gloria tries to win them back by doing a death drop — which totally works, but she wrenches her knee in the process. 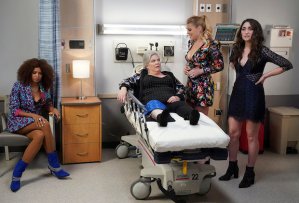 Gloria ends up in the hospital, where the doctor tells her she needs a knee replacement that will knock her out for 12 weeks. They know they need to strike while the iron is hot, though, so when Gloria finds out she can put off the surgery and just rely on steroids and painkillers, she orders the doc: “Shoot me up.” The others are in #AlbumMode, too: Wickie gets accepted to the ultra-exclusive dating app Raya, but she has to tell Tim Meadows she can’t risk him “Yoko”-ing the band. (They haven’t actually been on a date yet, mind you.) Plus, Dawn is getting swamped with emails from other moms about her kid’s karate class and has to tell them to contact her husband Scott instead, leading to a crisis among the other moms: “Ohmigod, am I sexist?”

The girls head into their first big podcast interview, with Gloria pumped up on Percocet. She has to down a few extra pills to get up a steep staircase, though, and when the interview starts, she’s in a opioid haze, wearing sunglasses and acting like that jerk Liam Gallagher from Oasis, British accent and all. When the podcast host asks her to demonstrate her death drop, she happily agrees, but the other girls see what state she’s in and stop her just in time. Wickie says they need to pause their promotional blitz, blaming it on “a rampant sexual addiction,” and Tate assures them they can take all the time they need. But next thing they know, Larry’s boy band is taking all of their promotional opportunities.

Wickie is more determined than ever to make their album unforgettable. (“Idea: Purple Rain… but now.”) She also decides to give Tim Meadows another chance… but he’s already moved on to another girl. Momentum is a tricky thing, isn’t it?

Give the Girls5eva premiere a grade in our poll, and tell us in the comments: Will you stick around for their sophomore tour?