The following contains major spoilers from the May 5 episode of HBO Max’s The Flight Attendant.

The mind palace’s Gold Dress Cassie isn’t just a bombshell — she sure as hell knows how to drop one, too.

In the fifth episode of The Flight Attendant Season 2, a perfect storm of stressors (telling Marco that she cheated on him, discovering the CIA’s fraudulent psych eval of her) led the titular Cassie (played by Kaley Cuoco) to really want a drink. She impressively resisted the urge, though… until a barrage of texts from her brother Davey, about their imminent trip back home/a “letter” she promised to write to their late father, nudged her to take coworker Grace (Mae Martin) up on her offer to swig the last martini in the shaker.

Cue Cassie later slipping into a corner store to load up on vodka, and even guzzle from one bottle at curbside. 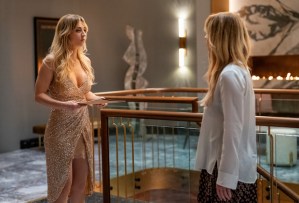 This fall off the wagon was devastating in and of itself, both for Cassie and for viewers who cheered the character’s one-year sobriety milestone. But a much bigger shoe dropped when Gold Dress Cassie taunted her repentant self with the fact that, no, she had not been sober for a year! Rather, she first slipped at the six-month mark — twice in three days (and pretty steeply) — before making the move from New York to Los Angeles.

The realization of that which she had tried hard to repress (Cassie apparently had told herself that the move to L.A. sorta erased that March 21/23 lapse?) sent the alcoholic into a tailspin — one that landed her on a beach that night, hysterically sobbing. Thankfully, she was eventually joined by AA sponsor Brenda (Shohreh Aghdashloo), who offered zero absolution but instead some sage, hard advice.

“The reason, from the beginning of the season thorough Episode 5, why Gold Dress Cassie feels pretty sure she can convince Cassie to drink is that she’s done it before and she believes that she can slip again,” co-showrunner Steve Yockey told TVLine. “But then when she does slip, it’s not what Gold Dress Cassie wanted. It’s not, ‘Oh, you turned into fun, sparkly me!’ but, ‘You turned into some nightmare person.’ And so she feels comfortable at that point just blowing up Cassie’s world, being like, ‘Stop lying to yourself and everybody else, saying that you’ve got a year under your belt — because you don’t.”

And as hard as the dropping of that truth bomb, and the tailspin that followed, was to witness, Yockey notes, “It leads to the scene with Brenda on the beach, which is one of my favorites in the season.”

Cuoco, as an executive producer on the Emmy-nominated series, of course knew that this twist was coming — but that didn’t make it any less heartbreaking to play, she told TVLine.

“I think that we all, in our lives, have kept things to ourselves or not been honest with ourselves, and that’s what broke my heart about Cassie this season — she can’t even look at herself,” Cuoco observed. “She can’t be honest, because she’s so worried about how people look at her, and she can’t even admit that she made these mistakes.”

But those mistakes were a must for the series’ second season, lest hard-drinking Cassie’s recovery encounter oddly little turbulence. “If she succeeded, we wouldn’t have a show. She’s got to make those mistakes,” Cuoco asserted. “And everyone’s journey in sobriety is their own, no two are the same.”

Cuoco said that with this devastating reveal, Season 2’s true theme has fully come to the fore. “That’s what this season is about — self acceptance and self forgiveness,” both of which she hopes Cassie can pursue with some success. After all, she opined, “I think we could all be a bit kinder to ourselves.”

What did you think about Episode 5’s sad revelation? And how do you think Cassie will manage in Episode 6, when she us unexpectedly reunited with her estranged mother, played by Sharon Stone?