The weather took a brutal turn on Wednesday’s episode of Survivor, but despite the group’s wrinkled skin and shaking, shivering bodies, the game never quits. One major player barreled straight toward a brutal blindside, while Omar once again proved himself to be a worthy potential winner, should he wind up in the Final 3. Let’s break it all down.

At the top of the hour, Mike’s not too happy about Hai taking the driver’s seat. Omar, ever the opportunist, sees a crack he can wedge himself into, and hopes that Mike sees how much of a threat Hai really is.

The next day, Lindsay fills Omar in about Jonathan trying to use Maryanne as the decoy vote. Since Jonathan pretty much sucks strategically, Lindsay seems ready to maaaaybe do something about it.

With two idols played in the last Tribal, the hunt is on! Then, the cheeky editors show Lindsay putting her hand on a tree branch just centimeters away from the idol! (IT’S RIGHT THERE!) Alas, she walks away with nada… which gives the firewood-searching Maryanne the ability to swoop in and find the goods. It’s a straight up idol — no “beware” disadvantage, and no rules or stipulations. She vows to not tell a single soul about it.

REWARD | The wind is whipping and the rain won’t let up. The weather has clearly taken a turn for the worse in Fiji, and you can literally see the contestants shaking violently from being cold and wet. Seems like a perfect time to offer the challenge winner a sanctuary getaway: pizza, beer, blankets, pillows and a warm place to sleep! It’s exactly what they’re all in dire need for. All they have to do is maneuver through an obstacle course, untie a totem pole with sandbags on it, then land one on a target. Lindsay is the one to get it done, and call me petty, but I’m glad Jonathan took the L here. (#SorryNotSorry)

Jeff tells her to choose one person to come with, and she picks Omar since he’s been a Day 1 homie and he hasn’t had a single reward yet. Jeff lets her pick another, and she selects Mike. 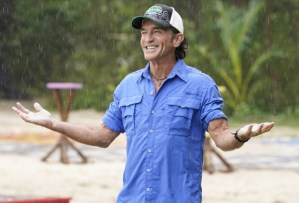 CAMP | The losing players are in a world of hurt. Maryanne talks about the pain they’re in from shivering for over 24 hours. Hai, however, knows this misery is temporary, and that things could be a lot worse. He also sees Lindsay fragmenting from Jonathan, and he’s more than open to cutting Goliath Aquaman 5000 loose. (I don’t know why I added the 5000. It just sounded cool.)

SANCTUARY | The winning three arrive to their reward and immediately start slamming pizza into their faces. But it turns out that cheesy, saucy bread isn’t the only reward: They’re also shown photos and videos from home! (It’s more or less the loved ones visit, COVID style.)

After tears are shed and pizza demolished, they get to it. Omar tells Mike that he feels Hai has been keeping them apart, and that Hai called Mike “his puppet.” AND HE’S LYING THROUGH HIS TEETH! Genius. Mike buys it hook, line and sinker. Omar tells us: “It worked because Mike looked me dead in the eye and he said, ‘Your story makes sense,’ and I was like, ‘I know it makes sense! You tell a good lie, not a stupid lie!'”

IMMUNITY IS BACK UP FOR GRABS | Players must stand on a narrow perch balancing a ball on a bow. And 10 episodes in, you’re probably a bit tired of me griping about all these repeated challenges and how Australian Survivor is running circles around U.S. in the challenge department, so I will spare you. (I understand these seasons were produced under very trying circumstances. I get it. But 43 better bring the heat!)

Lindsay and Jonathan as the last players standing. They survive to the last round, but Jonathan’s giant feet can barely fit on, so Lindsay takes the cake once again.

STRATEGY | Hai is happy that Jonathan lost, and he’s confident he has the numbers to sway the vote his way. But Mike is still salty about being labeled Hai’s “puppet,” and he talks to Jonathan about “cutting the head off the snake.” Drea also wants Hai gone, knowing how good of a game he’s playing. Plus, if Hai goes, Lindsay and Drea’s amulet pieces become a steal-a-vote. 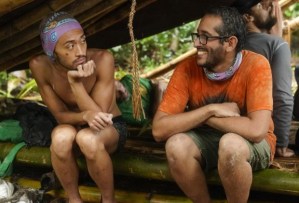 Hai then tells Jonathan not to worry because he found an idol and he’s going to try to get Romeo out. It’s a BS plan, which Jonathan then relays to Omar. Since no one trusts Hai at all, Omar begins to think Hai can maybe stick around for another day or two.

TRIBAL COUNCIL | After commenting on how hard the elements have gotten over the last couple days, the conversation turns to timing, and knowing how and when to take someone out. Omar and Mike talk about following their gut feelings, and how one can only know what the right decision was after it all plays out. Maryanne then goes on about “Survivor Jenga,” and when Jonathan confirms he was able to follow her train of thought, she unleashes the best celebratory fist-pump Reality TV has ever seen.

Lindsay then says tonight’s vote is about evening the playing field, but that statement is something Jonathan can’t quite comprehend.

It is… time to vote. Zero advantages or idols are played, and when the results are read, Hai is the one sent packing. “Oh my God, that is… amazing! Brilliant, brilliant, brilliant!” he says on his way out. And you know what? We love to see that positive attitude. (Read our Q&A with Hai here.)

Surprised Hai got the boot? Wondering where the line for the Omar fan club starts? Light up the comments with your thoughts!