Following one of the most chaotic cliffhangers in the history of the MCU, Episode 6 of Moon Knight — the grand finale, if you can believe it — picks up with its titular hero still very much dead, leaving only Layla to stop Arthur from freeing Amit.

Is she successful? Not entirely. Arthur indeed awakens the giant alligatress, who in turn accepts him as her new avatar. But thanks to a message from Taweret, Layla is able to free Khonshu, who immediately tries to convince her to take Marc’s place. She wisely rejects the god’s offer, telling him, “We’ll work together without me enslaving myself.” Yes, boundaries!

Meanwhile, Marc is not living his best afterlife. He can’t possibly mellow out in the Field of Reeds knowing that Steven is still out there in the desert, so Marc ignores Taweret’s warnings and says sayonara to paradise. The two Oscar Isaacs eventually reunite in the sands, and it really is a thing of beauty. “I survived because I knew I wasn’t alone. You were always there, full of hope,” Marc tells Steven, thanking him for being there when life became too dark to handle. “You didn’t abandon me, and there’s no way in hell I’m ever going to abandon you.”

Marc then appears to suffer the same fate as Steven, but when the heart between them begins to glow, they’re both restored. Let the hugging commence!

Back in the land of the living, Moon Knight joins the fight against Amit, occasionally shifting into Mr. Knight because, as they explain, “We do come as a package deal now.” And speaking of package deals, Khonshu agrees to release them both if they help him defeat Amit.

And they aren’t the only ones making moves. Layla also agrees to become Taweret’s avatar, following a brief heart to heart about how she escorted Layla’s father to the Field of Reeds. (Aww!) With their pact official, Layla gets a killer new costume, complete with — wait for it — wings! And I’m not the only one excited about her new look. “Are you an Egyptian superhero?” one young girl asks, to which Layla proudly replies, “I am.”

Thus begins the series’ coolest fight sequence yet, with Layla and Moon Knight (and Mr. Knight, who also kicks a considerable amount of ass) mowing down Arthur’s followers while the gods do battle behind them. And just when it seems like Arthur has the upper hand, Marc has another classic blackout and suddenly finds himself holding Arthur’s limp body. No questions asked.

Marc and Layla drag Arthur back to the temple, where they do a spell to imprison Amit in her avatar’s mortal form. But when Khonshu tells Marc to kill them both, Layla reminds him that he has a choice. “You want him dead? Do it yourself,” Marc tells Khonshu. “Now release us.”

This brings Marc back to “reality” (aka the hospital where Arthur is his doctor), only something feels different this time around. “You don’t believe Khonshu and Amit are real?” Marc asks. When Arthur dismisses the gods’ existences, Marc coldly replies, “What if we disagree, doc? What if we believe in something different?”

Arthur says their work will have to continue, but when he suddenly starts bleeding and doesn’t understand why, everyone’s perception of reality comes into question. “While it is tempting to accept your diagnosis, doc, we’d rather go save the world,” Marc says. “Laters, gators!”

Marc then awakens in Steven’s apartment, chained to the bed, judging his British alter ego for maintaining such crappy living quarters.

Nope! Moon Knight finally gives us a mid-credits scene, and it’s a doozy: Arthur finds himself in a psychiatric hospital, muttering about sand. He’s escorted out by a mysterious stranger, one who appears to have killed multiple security guards in his efforts to spring Arthur. He is escorted into a limo (license plate “SPKTR”), where he’s greeted by none other than Khonshu.

“Marc Spector truly believed that after he and I parted ways, I wanted his wife to be my avatar,” Khonshu tells Arthur. “Why would I ever need anybody else? … But he has no idea how troubled he truly is. Meet my friend, Jake Lockley.” 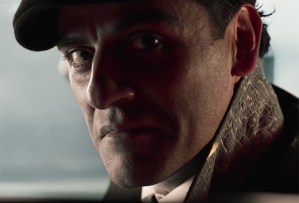 The limo driver then turns around, revealing himself to be Isaac as a third personality, one that fans of the comics have been hoping to see for some time. Jake shoots Arthur, presumably killing him, then drives off.

Your thoughts on the Moon Knight finale, including that fan-pleasing final shot? Grade the episode and the season below, then drop a comment with your full review.