Harry Bosch is back on the case — though a different kind of one — as Bosch: Legacy hits Freevee (fka IMDb TV, Amazon’s free streaming hub) this Friday.

A spinoff of Prime Video’s seven-season adaptation of Michael Connelly’s Bosch novels, Bosch: Legacy again stars Titus Welliver as the former LAPD detective, who a year-and-a-half after the events of the previous series’ finale is finding work here and there as a private detective. (Harry being Harry, he relies solely on word of mouth and won’t give out his number.) 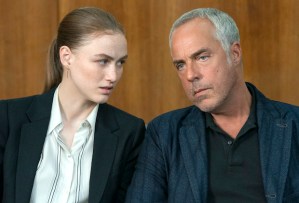 Elsewhere, daughter Maddie (Madison Lintz) is about to brave her first day as an LAPD rookie/”boot,” while family friend/legal eagle Honey “Money” Chandler (Mimi Rogers) is champing at the bit for hedge fund slimeball Carl Rogers to get what’s coming to him, after he wreaked so much havoc — including trying to have her killed — in Season 7.

As many have quipped since Legacy was announced, Welliver himself feels “it’s less of a spinoff and more of a continuation. And if you’ve followed these characters at all over the years, it’s a natural progression.”

Indeed, danger will be no stranger to Bosch-as-P.I., who in Episode 1 is courted by a billionaire (played by William Devane) for a hush-hush bit of snooping that promises to raise many hackles.

Bosch: Legacy premieres Friday with its first four episodes, to be followed by weekly drops of two at a time. TVLine spoke with Welliver about what’s new (and not) with Harry, a bit of recasting, and his candid thoughts about the new “Freevee” name. 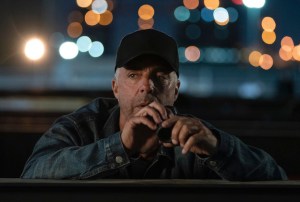 TVLINE | This is the obvious question, the easy question, but I figured you have a snappy answer by now. How is this not Bosch Season 8?
You know, it really is, ultimately. But from a focus point, it’s not. Harry’s not a cop. He’s not partnering with Edgar. The focus is a bit more myopic than it was in the previous show. But it’s still the Bosch universe, and we push Maddie and Chandler up against the side of Harry

TVLINE | I have to imagine that, when going from Bosch to Bosch: Legacy there was probably an off ramp for you, in case you were like, “Know what? I’m good.” What is it that makes you want to keep playing this character? Are you kind of like, “I get this guy”?
Yeah. The beautiful consistency of this character is that he’s the same guy that I jumped into now looking at almost a decade ago. I mean, he evolves over those seasons, but he always has a great moral compass. It’s very, very easy to continue playing a character that has that. 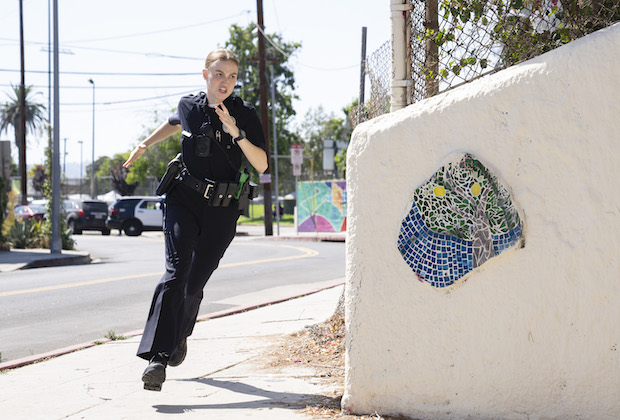 TVLINE | Speaking of evolving, who’s acclimating better to their new reality — private eye Harry or LAPD rookie Maddie?
You know, I think they’re both really deeply at sea. I mean, Harry’s untethered. He’s really a Ronin, a master samurai, and while he watches his daughter progress into the world of police work, he doesn’t want to be giving unsolicited advice. He kind of waits for her cue. Maddie has enough sense to know that she has to be careful, so we get to watch them kind of do this weird sort of “dance” with how they communicate.

TVLINE | The police work used to really get Harry worked up. Is he breathing easier these days? Is his blood pressure down a bit, you think?
No, I don’t think so at all. He’s kind of in a state of boredom, and it’s not like his desk is piled up with investigative cases. He’s sort of idle, and at the same time, Maddie is doing her thing, so we find him in a place of sort of “circling the airport,” for lack of a better analogy. 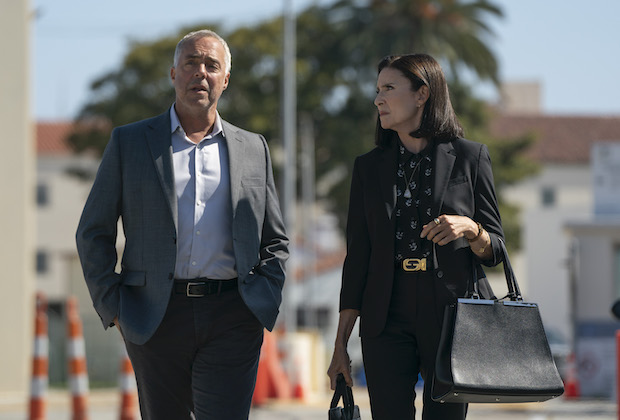 TVLINE | And what all keeps Honey Chandler in his orbit in the new show?
Well, they’re old friends, and they’ve come to a place of mutual understanding and respect. Harry is very, very cognizant of the fact that she’s been through this enormous trauma [of being shot by a gunman hired by Carl Rogers]. He observes her being deeply fragile and fractured and broken, so there’s a genuine concern for her, and he’s not sure how he can be of help to her. So, when she comes to him and says, “I want to bring you on as my guy [investigator],” he says, “Look, I’ll do anything for you, but just don’t ask this of me.”

TVLINE | I love that the Carl Rogers business is unfinished, and that you’re going to keep pulling at that thread from the previous show.
They have to. It’s unenviable, because Harry wants to get that guy put away, but at the same time he doesn’t want to cross over into [Chandler’s] world. He’s deeply conflicted, and he’s going to ultimately navigate that. 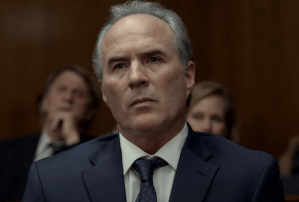 TVLINE | Did I spot a stealth recasting of Carl Rogers (previously played by Winning Time‘s Max E. Williams, now Michael Rose)…?
Yeah, yeah. I think there was some sort of issue of availability or whatever, but it was a great choice, and he smashes it. He’s great as Rogers.

TVLINE | Along the way in Bosch: Legacy, will we get the occasional update on Jerry or Billets, any of the old gang? 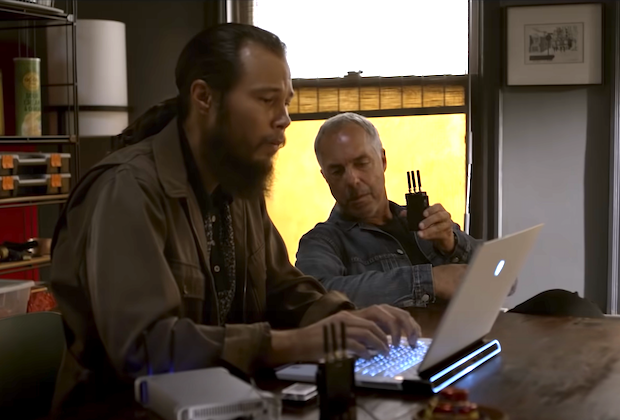 TVLINE | Talk a bit about Stephen Chang’s (Artificial) character and his role in Harry’s new world.
Well, the character of Mo, beautifully played by Chang, is kind of Harry’s Q. And if you know the Bond films, Q is a guy who’s always got the gadgets and the answers for Bond. The difference is that Bond always seems to be immediately adaptive to whatever Q gives him, whereas Harry, you know, is a dinosaur. He’s vexed, and kind of irritated and confused, but Mo always pushes him through. He’s a great foil for Harry. And at the end of the day, they share this incredible encyclopedic knowledge and passion for jazz, which moves them toward a beautiful assimilation in that relationship. 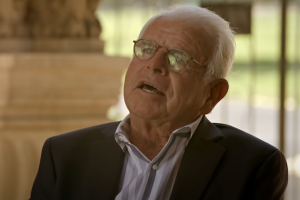 TVLINE | So, I’m watching the first episode and bam, there’s William Devane (24). And Kate Burton (Scandal) also shows up. Are the guest stars just going to keep on popping up like that?
Yeah, they will. And as for Devane, Rolling Thunder is one of my all-time favorite films, to say the least, so I’ve been a longtime fan and admirer of his. It was really a dream come true to sit across the table from Bill. And Kate and I have worked together before.

TVLINE | Netflix has a new Lincoln Lawyer series [starring Manuel Garcia-Rulfo as Mickey Haller] and the book they’re doing, “The Brass Verdict,” was very Harry Bosch-heavy. Was there ever any outreach about, if even feasible, you popping up on that show?
Well, we can’t, because of the [bifurcated] rights. Lincoln Lawyer is at Netflix and Bosch is at Amazon, so they can’t cross pollinate. But this is something that we’ve all sort of struggled with, and it goes both ways. We’ve had to do the same thing on Bosch with the [Mickey] Haller character.

TVLINE | Lastly: Are you able to say Freevee yet without cracking a smile?
It’s much easier than saying IMDb TV! I love Freevee, it’s great. You know, [Michael Connelly] and I, when we first [learned Bosch: Legacy would be on IMDb TV], I said, “I can’t say that three times fast. It’s worse than ‘she sells seashells by the seashore.’ No, Freevee is easy. Also, I think the whole application of the fact that if you have Amazon Prime, you can access Freevee is great, because I actually watch a ton of [shows] on IMDb TV, and I’m not even remotely bothered by commercials. I really don’t mind, because,’ look, I’m 60 years old. I grew up watching network television. So, commercials, they don’t bother me at all.

Want scoop on Bosch: Legacy, or for any other show? Email InsideLine@tvline.com and your question may be answered via Matt’s Inside Line.