The Good Doctor saved the best for last on Monday. Former series regular Antonia Thomas made her highly anticipated return as Dr. Claire Browne at the tail end of Season 5’s third-to-last episode, where she surprised Shaun and Lea at their joint bachelor/ette party.

As friends embraced the soon-to-be-marrieds — the wedding, we’re told, is in a matter of days — Claire appeared on stage and belted out a reworked version of the Faith Evans/Puff Daddy classic “I’ll Be Missing You” to reflect the time she’s spent away from her St. Bonaventure family. And no one was more excited than Dr. Murphy to see his old friend return, jumping up and down for the camera and declaring “It’s Claire!” as the hour came to a close.

Prior to Claire’s comeback, Monday’s episode saw Shaun and Lea awkwardly navigating their new reality as the subjects of an upcoming Hulu docuseries about atypical couples. In exchange, the production would foot the bill — up to $150,000! — for their dream wedding. Sophie’s camera crew began following them on a monumental week for both Shaun and fellow fifth-year resident Dr. Park. Coming up on the end of their residencies, both surgeons would be tasked with overseeing a case of their own, without guidance from Drs. Lim and Andrews. Shaun, who mistook third-degree burns for second-degree burns on his patient, worried that the cameras were a distraction. Park, meanwhile, was slow to adapt to his new role as attending. He nearly forfeited the case to Lim, but ultimately stepped up and changed surgical course to do what was in his patient’s best interest. 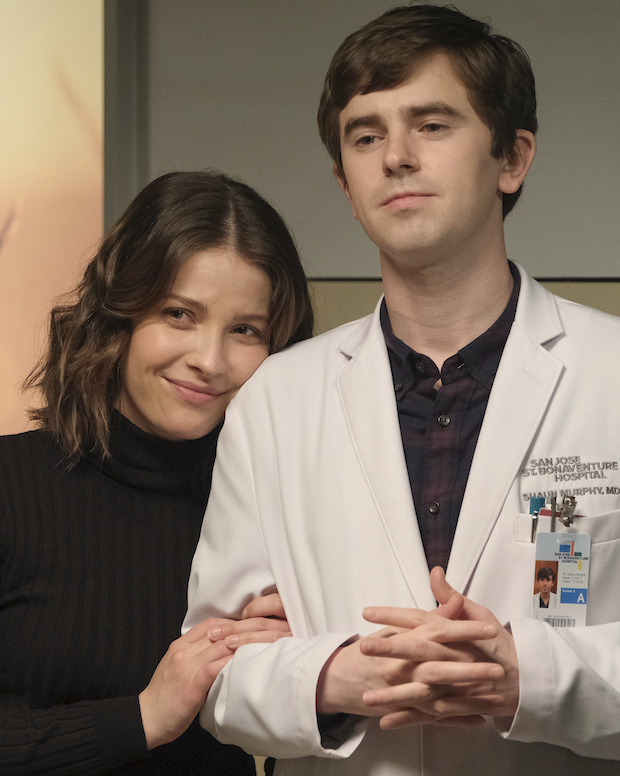 As for Shaun and Lea, they were each forced to reckon with their image: Shaun had to decide whether he wanted his surgical blunder to be left on the cutting room floor, while Lea had to decide whether she wanted her past concerns about being in a relationship with Shaun to be part of the show’s narrative. Shaun eventually concluded that even great surgeons make mistakes and told Sophie she could use the footage. As for Lea, she chose to be up front about her previous doubts. She sat down for a confessional and explained that she feared she and Shaun were too different — that she’d have to compromise too much. And she worried what people would think of them, and of her, and she didn’t want to seem different. But because of how Shaun saw her, he ultimately made her believe that she was stronger than she ever gave herself credit for, and that together, they were enough — more than enough.

Glassman was also interviewed by Sophie and reflected on his evolving role in Shaun’s journey. No longer Shaun’s protector, he explained how much the medical prodigy had changed over the last five years. He had grown up and met Lea, and he was proud of the man that his surrogate son had become.

Also of note: Nurse Villanueva, who since Season 1 has been portrayed by Elfina Luk, received a storyline of her own. Prior to Shaun and Lea’s shindig, she sat down with Lim and acknowledged that she is the victim of domestic violence. How this will play into the final two episodes of the season (if at all) with the Murphy/Dilallo wedding fast approaching is unknown.

What did you think of The Good Doctor Season 5, Episode 16: “The Shaun Show”? Drop a comment with your full review.