Netflix is cooking up a new take on the classic Iron Chef recipe — but it’ll include some familiar ingredients.

The streamer’s new cooking competition, Iron Chef: Quest for an Iron Legend, will premiere Wednesday, June 15, TVLine has learned, and Alton Brown — who hosted Iron Chef America on Food Network for more than a decade — is returning as host. Well, co-host, because he’ll be joined by Top Chef winner Kristen Kish, who took home the top prize on Season 10 of Bravo’s culinary reality series in 2013.

Plus, Iron Chef fans will be pleased to know that Mark Dacascos, aka “The Chairman” on Iron Chef America, is returning as well to reprise his role as the food-loving master of ceremonies. 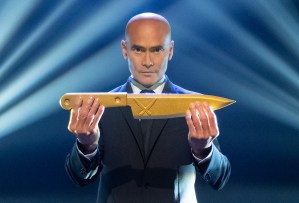 Quest for an Iron Legend puts a fresh spin on the Iron Chef formula: Five new Iron Chefs will face off against challengers in a revamped Kitchen Stadium, where they’ll be “pushed to the limits of endurance and creativity as they cook up extraordinary culinary creations,” per the official description. Plus, “the competition’s most successful Challenger will return to battle in a grand finale for the chance to be named the first ever ‘Iron Legend.'”

A new teaser — which you can watch above — gives us a sneak peek at the new format, which looks like it might be more of a team cooking contest, as opposed to the one-on-one battles on the original Iron Chef. (The franchise began in Japan before coming to our shores as Iron Chef America in 2001. Netflix is also developing Iron Chef Mexico and Iron Chef Brazil, which will debut later this year.)

Are you hungry for more Iron Chef? Press PLAY above to check out the teaser, and give us your first impressions in the comments.