Star Trek TV shows are multiplying like Tribbles these days. Starting with 2017’s Star Trek: Discovery — the first Trek show in more than a decade — the iconic sci-fi franchise has rolled out five new shows on Paramount+ in the past five years. As a lifelong Trekkie, it’s been a pleasure to navigate this wealth of Trek content, but I also have to be honest: It hasn’t always been smooth sailing.

Both Discovery and the Next Generation sequel series Star Trek: Picard started out strong before running into narrative quicksand in later seasons. (Discovery has become relentlessly grandiose, with endless speeches about the glories of space travel, and Picard has gotten head-spinningly complicated.) It’s a relief, then, that the latest Trek offering, Star Trek: Strange New Worlds — premiering this Thursday on the streamer; I’ve seen the first five episodes — gets back to basics, closely hewing to classic Trek with an old-school vibe and an episodic alien-of-the-week format. (It even brings back the traditional uniforms and opening narration from the original series.) It’s a throwback, to be sure… and a welcome one. 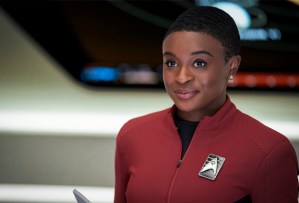 Strange New Worlds finds Christopher Pike (Anson Mount) — Kirk’s predecessor as captain of the Enterprise, who played a major role in Season 2 of Discovery — in a snowy Montana cabin, casting him as the archetypal reluctant hero called back to duty to rescue an old friend. That call puts him back in the Enterprise‘s captain’s chair, flanked by his first officer Number One (Rebecca Romijn), science officer Spock (Ethan Peck) and wide-eyed cadet Uhura (Celia Rose Gooding).

We get a few passing mentions of Discovery‘s Michael Burnham, but Strange New Worlds mostly charts its own course with clear-cut missions and a new planet/alien/mystery each week, while still weaving in a few serialized strands throughout. The weekly format keeps it light and nimble, and it doesn’t get bogged down by impenetrably dense technobabble like Discovery and Picard do, opting instead for light comedy, fist fights and eye-candy special effects like a thrilling chase through an asteroid belt. It’s more personal and physical, less cosmic and cerebral. 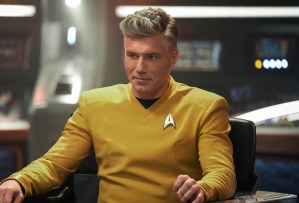 It also assembles maybe the strongest crew of the current Trek series. Mount makes a terrific captain, with a commanding presence and a twinkle in his eye that recalls William Shatner’s Kirk. He was a great addition on Discovery, and he gets to go even deeper here, with Pike unable to shake a haunting vision of his tragic future. The iconic role of Spock is in good hands with Peck, and we get to see a sexier side of the logical Vulcan through his encounters with girlfriend T’Pring. Plus, Gooding brings fresh life to Uhura, and Jess Bush is appealingly snarky as Nurse Chapel. Episode 2 even takes time out for a chummy crew dinner that helps deepens our understanding of these characters, and other crew members hint at more connections to classic Star Trek lore.

A warning, though (or a red alert, I suppose): The standalone stories are just OK so far. The early episodes are pretty standard sci-fi fare: the mysterious object with formidable powers; the mysterious virus that infects the whole crew. I’d like to see these new worlds get a bit more strange. (Episode 4, though, is an effectively tense thriller, as the Enterprise faces off against the ruthless Gorn alien race in a stripped-down space battle.) There’s nothing here yet that stacks up against the very best episodes of the original Star Trek or Next Generation… but then again, that may be an unfairly high bar to reach this early on. It’s off to a promising start, with a solid crew brimming with potential. By going back to the past, Strange New Worlds points the way to a brighter future.

THE TVLINE BOTTOM LINE: Star Trek: Strange New Worlds gets back to basics with an old-school, episodic format that reinvigorates the franchise.