Sunday’s Alycia Debnam-Carey-directed episode of Fear the Walking Dead not only served up a significant casualty — and right on the heels of Charlie’s death sentence last week — it foreshadowed what sure sounded like the imminent demises of two more characters.

It all started when Daniel, his memory failing, took off from Morgan’s submarine in search of poor, long-dead Ofelia. Luciana and Wes quickly found him — but so did Arno and his peeps (aka Teddy’s former followers). Dragged to a boatyard (?) at which the Abigail was collecting dust, our heroes learned that their walkie-talkie blabbering had tipped off Arno to the weapons cache that Morgan was after. Daniel, convinced that his daughter was aboard the Abigail, was only too eager to offer up the coordinates in exchange for Arno’s promise of a reunion. (“Um, yeah, sure, she’s totally on that yacht.”)

Later, alone with Luciana and Wes, Daniel admitted that he’d given their captor the wrong coordinates and lifted a knife off of one of his henchman. With half of Arno’s group on a wild-goose chase, they’d have no trouble retrieving Ofelia (mm-hmm) and escaping. How had he been lucid enough to pull that off? His daughter. His desire to tell her about his dark past, to apologize and make her understand, had given him perfect clarity.

Of course, once Daniel discovered that Ofelia was not aboard the Abigail, things went south fast. He slit the throat of the guard before he could reveal to Wes whether his brother Derek had known that he was at Tank Town when it was attacked. (This was important, doncha know, because it would’ve made Wes feel less guilty about making himself an only child.) 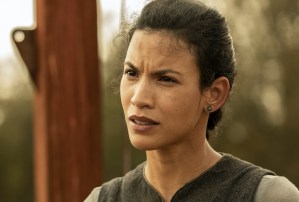 From there, Daniel separated from Luciana and Wes, and sought revenge against Arno for lying to him by lowering him in a cage into a group of hungry walkers with a yen for legs. Before he croaked, Arno revealed to Luciana that “what was coming” was walkers that had been collecting in a pit. Someone had been letting them out, even the radioactive ones. Now it was upon her to get everyone safely into the much-ballyhooed Tower.

Feeling crummy about almost getting Luciana killed (again), Daniel encouraged her to leave him behind. Instead, she was like, “Hey, we all screw up,” so, moved, he told her, “Even though we’re not blood relatives, as of today, we are family.”

So, um, how were Daniel, Luciana and Wes to get away, much less protect Arno’s people, the ones that he’d maintained Alicia had so let down? A speech, that’s how. Luciana simply implored them to let bygones be bygones. “We need to fight Victor Strand and take his Tower” together in order to get a new beginning, she argued. And even though the reason that the group went along with it was “It’s what Teddy would’ve wanted” — possibly the worst reason ever — they did indeed go along with it.

Daniel (too loudly) expressed his skepticism that they could really take the Tower from Strand. But Luciana insisted that they had a secret weapon: him. He could predict Victor’s moves better than anyone. As if, Daniel replied. He’d only been able to pull off what he had that day because Ofelia had given him focus. Well, um, that was OK, Luciana said, thinking on her feet, because she was at the Tower. Sure, that’s the ticket. Arno had told her before he died. “If you’re wrong, if this is not true, if this is another lie, it could break me for good,” Daniel warned. “Are you sure?” 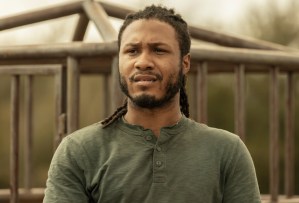 “It is true, Daniel,” Luciana insisted. In that case, Daniel was in — and he, Ofelia and Luciana would be together always. (Um… in the hereafter? Yikes. Even if you’re hard of seeing, the writing on the wall was pretty big, eh?) Disgusted by Luciana’s manipulation of Daniel, Wes took off on his own, making his way to the Tower to offer Strand a deal. And why would Victor agree to that? “I can help save his Tower.”

What did you think of “Ofelia”? Was Luciana wrong to lie to Daniel? Was Wes wronger to rat them out to Strand? Hit the comments.