This Sunday’s Call the Midwife started out like any other installment of the PBS drama.

Sister Hilda led the morning meeting for the midwives and noticed that Nurse Nancy seemed preoccupied with news of 1967’s Abortion Act. While all of the staffers commended the law for eventually saving lives, Sister Hilda simply wanted Nurse Nancy to concentrate. She talked to Sister Julienne about it and the two came up with a plan to give Nurse Nancy more responsibilities.

Nurse Nancy was supposed to lead the morning meeting soon after, but she overslept. Sister Julienne then decided to take Nurse Nancy to an obstetrics conference in Chelmsford with her and Dr. Turner. Nurse Shelagh was supposed to go before Tim came home sick from school with mono and needed care.

At first, Nurse Nancy wasn’t excited about the conference because it was taking place on a Saturday, and that’s the day she normally spends with her daughter Colette. After talking to Sister Hilda and giving it some thought, however, Nurse Nancy came around and grew enthusiastic about furthering her professional knowledge. 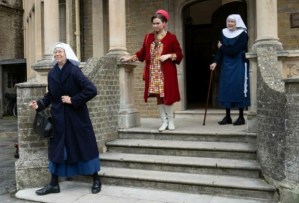 Sister Hilda also felt badly that the working mom had to choose between her career and motherhood, so she offered to cover Nurse Nancy’s Sunday shift so she could spend that day with Colette instead. Nurse Nancy, Dr. Turner and Sister Julienne went on to have a great time at the conference learning about the future of epidurals and suction devices, and happily talked shop on the train ride home.

Lionel Corbett, the husband of Sister Hilda’s pregnant symphysis pubis patient, Edina Corbett, was operating the train. Everything was going well until he suffered some sort of seizure and lost control. Lionel failed to stop at a red light and a second train collided into the side of his train soon after.

Nurse Nancy, who had gotten up to use the ladies’ room, got a bit bruised during the collision. Sister Julienne and Dr. Turner were much less lucky and thrown around violently by the crash. By the end of the episode, it was unclear how badly the two (and everyone in their railcar) were hurt and who among them had survived. 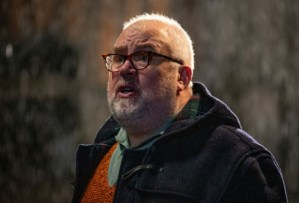 The people of Poplar suffered injuries too because the train derailed on an overhead bridge. Cyril and Nurse Lucille had been holding a church service and one of their parishioners, Mrs. Wallace, was struck in the eye with a shard of glass. Others contended with minor cuts and bruises and most of them were ushered to Nonnatus House with the help of Fred, Lucille, Cyril and Matthew.

Sister Monica Joan grimaced and worried that the crow, who had visited her once more, was to blame for the disaster. Tim, meanwhile, would likely fret that his argument with his father, Dr. Turner, would be their final conversation. And Sister Frances was still at the hospital with Carole, the pregnant teen. Carole, who had a son already, prematurely gave birth to a baby girl. And that baby didn’t appear to be breathing.

What did you think of Call the Midwife Episode 7? Are you worried about Dr. Turner and Sister Julienne? Drop your thoughts in the comments.