THE PERFORMANCE | It’s easy to “ooh” and “ahh” about dual roles, but take a moment and consider the fact that for the bulk of 43 minutes this week, Oscar Isaac did a whole lotta acting opposite himself. And not just ain’t-it-cool standing beside himself in a scene, but as Marc and Steven (…and even a hint of Jake Lockley, in the cold open) ran through gamuts of emotions.

Not that Marc himself didn’t have things to process; faced with a diorama of those he killed as a merc, he took zero pride but instead lamented, “I kept wishing I’d fail, and one of them would kill me instead.” The healing power granted by the Egyptian god Khonshu “ended up being a curse,” he attested.

Ultimately, Steven found his way into a memory of Marc’s childhood, where the death of kid brother Randall thrust their mom into a dark af spiral. “Why are you remembering her like that?” wondered Steven, Isaac’s face and voice conveying the urgency of his inquiry. “What are you hiding…?!” Marc refused to illuminate further, as Isaac channeled a different kind of intensity.

“I’m begging you, don’t make us go there again…. It’s not worth it,” Marc insisted. But Steven nudged. And nudged. “I won’t do it!” balked Marc, slapping himself silly as he roared, “You! Can’t! Make me!”

Yet return to the scene of the proverbial crime they did, where Steven witnessed how their mother’s abuse of Marc led him to disappear into the identity of movie hero “Dr. Steven Grant.”

“You made me up…,” Steven realized, and the way Isaac barely got those words out were a gut punch. “All this time I thought it was the original,” but in actuality was Marc’s “stress ball,” Steven grumbled.

The hits kept coming, as Marc disclosed that the mother Steven believes he calls every week is no longer alive. Steven disputed the claim, only to have the reality hit him while in “Dr.” Harrow’s office. “My mum… My mum is dead,” he admitted. That set the stage for the gents’ revisiting of Marc’s heartbreaking breakdown outside the shiva he refused to attend, as Isaac capped his tour de force outing.

THE PERFORMANCE | AMC’s Breaking Bad prequel has been a treat for fans who want to see more of Saul Goodman and Mike Ehrmantraut and Gus Fring, but it’s also introduced to a new slate of compelling characters. Mando’s conflicted criminal Nacho Varga has been the heart and soul of Saul for six seasons now, and though — spoiler alert! — he met his demise this week, he went out in a blaze of glory with a beautifully moving episode that saw Mando hit new dramatic heights.

Nacho knew his number was up, and after narrowly escaping the bloodthirsty Cousins, he placed a poignant final phone call to his father. Though Nacho tried to play it cool, we could see the emotions welling up in Mando’s eyes as his character’s tragic fate began to settle in. With his time running out, Nacho traded his own life for his father’s safety by turning himself over to the Salamancas, and Mando’s grit and determination during the negotiation just underlined how noble this lowly crook had become. As his execution loomed, a beaten but not defeated Nacho used his final breaths to tear into the Salamancas in a scorching monologue, saying he would’ve killed Lalo for free “because I hate every last one of you soulless sacks of s–t.” And then — in a real Olenna Tyrell moment — he twisted the knife by telling Hector he’s the one who put him in that wheelchair, with veins furiously pulsing in Mando’s head as he spat out that anytime Hector struggles, he hopes “you think of me, you twisted f–k.”

Nacho ended up taking his own life by stealing a gun and firing it into his own skull, and though we had a bad feeling he wouldn’t survive Saul‘s final season, it’s at least a small comfort to see him go out on his terms. Nacho may not have lived long enough to share the screen with Breaking Bad‘s Walt and Jesse — but with Mando’s truly exceptional performance this week, he’s more than earned the right to share the screen with anyone. 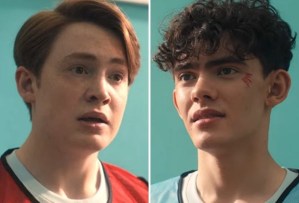 HONORABLE MENTION | Throughout Netflix’s stunning Heartstopper, Kit Connor and Joe Locke taught a master class in chemistry, playing the romance of high-schoolers Nick and Charlie with a mixture of hesitation and elation that was pure magic. And in the finale, as we all but sobbed in hopes of a happy ending, the actors delivered everything we could’ve wanted and more. As Nick beseeched Charlie not to break up with him, Connor radiated a sincerity that would’ve been impossible to deny. (Did anyone not melt hearing the earnestness with which he cried, “You’re my favorite person!”?) Locke, as always, rose to the occasion, then took it a step further later, when Charlie innocently asked if he and Nick were now boyfriends. The vulnerability on display, not to mention the unbridled joy, was beyond sublime, miraculous. 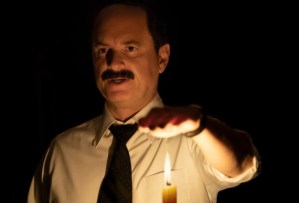 HONORABLE MENTION | From Gaslit‘s first few seconds, we knew Shea Whigham‘s Gordon Liddy was going to be a trip. As the former FBI agent who took lead on the Watergate espionage operation, the actor served raw determination as Liddy pitched his shady plans to John Mitchell and his cronies. Whigham tapped into his primal nature and unleashed the character’s insane rants with aplomb. And after his far-out ideas were deemed “too ambitious,” the actor piloted Liddy through a full-on meltdown, flipping furniture and smashing glass. In almost the same breath, the zealot sought a balm for his insecurities, comically clinging to John Dean’s flimsy compliments, and allowing an entirely different tone to seep through. Whigham never took his foot off the gas, as he pinned a colleague to a wall, karate kicked a napkin dispenser and solidified an upspoken loyalty with a fellow “soldier.” Thanks to Liddy’s borderline psychotic quirks, Whigham put forth a performance that was both uninhibited and unhinged in the best possible way. 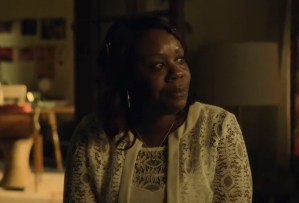 HONORABLE MENTION | It’s impossible to fully convey with words the depth, the vulnerability and the guttural conviction that makes up Andrene Ward-Hammond’s moving performance in 61st Street. Embodying the agonizing pain and unrelenting determination of a Black mother who refuses to let her son be swallowed up by Chicago’s criminal justice system, Ward-Hammond again shone this week with a heartfelt performance that saw Norma grapple with the possibility that her son could be put away for life. Ward-Hammond’s ability to conjure silent tears in one moment and then quickly throw up a mask of strength in the next are a testament to her limitless range. She delivered with every inch of her soul, and it was incredible to watch.