We’re now more than halfway through Outer Range‘s freshman run, but are we any closer to figuring out its time-bending mysteries? Well, yes and no.

In the first of Friday’s double-dose of episodes, Rhett is distant with Perry, who admits he royally messed up (no pun intended). The older brother promises to not let his younger kin go down for what he did.

Meanwhile, the rivalry between Royal and Autumn continues to heat up, as the young woman lurks around the Abbott household in search of her necklace. Cecelia finds her snooping around, and forces her to leave at gunpoint. The Abbott matriarch says that whatever Autumn’s doing there, she’s not going to let it happen. “Something’s already happening,” Autumn replies.

Royal takes the necklace to a specialist who says that Wayne Tillerson spoke to her about wanting to get some land surveyed, but then she never heard back from him. Royal lets her evaluate the rock, and she says amber is encasing whatever’s inside. As she talks, he investigates framed photos on the wall and finds the BY9 logo he saw in the future. He refuses to leave the rock behind for testing. He calls the contact number for BY9, but it’s disconnected.

Perry finds Autumn in town, and they bond over feeling like the black sheep of their families. He shares that he had a fight with Rebecca the night she disappeared. He woke up and she was gone. Maybe something happened to her, maybe she was just fed up. He’ll never know. “What if I told you it’s possible to understand what happened to her even without knowing exactly what happened to her?” Autumn asks. “What you’re going through. What if it’s bigger than you? Bigger than all of us?”

In his barn, Royal crushes Autumn’s rock in a vice. There’s a strange black powder inside, and as Royal smushes it in his hand, he sees that weird wispiness again — the same effect that hovers over the hole. He sees a vision of Cecilia holding him. (Is this his death that his wife mentioned when he traveled to the future?) Autumn is there, too. And in the vision, she sees him. The real him. He looks down at his hands as the black substance dissipates. 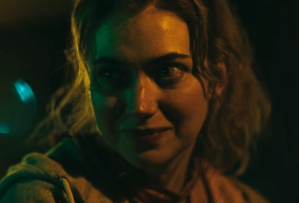 At the top of Episode 6, Royal finds Autumn standing by the hole, and offers her a ride on his ATV back to her camp. He begins to drive recklessly, which frightens her enough to jump off. She crashes hard on the ground, and Royal circles back to tell her he destroyed the necklace. “You know what happened? Nothing! Your rock was just a f–king rock!” Clearly, he’s lying. But she knows all about the mineral, and thinks it and the hole are connected, and that both are connected to time.

“Time is a dimension, like length, width, height. We can see those, we can touch them, so why not time?” As she recounts her theory, Royal is freaking. out. “Stay away from my family, or I WILL KILL YOUUU!” he yells. (An angry Josh Brolin is quite scary, and it feels like he can murder me through the screen if he wanted to.) Royal abandons her in the middle of the wilderness in the black of night. Then, he torches her campsite and all of her belongings.

The next morning while Autumn is limping back to her campsite, that large grizzly bear tracks her down. She lays down on her side and plays dead, as the bear gets all up in her grill sniffing around. It puts its face right up to hers. “Yellow,” she whispers to the bear. We hear a voice echo softly back to her. “Show him.” Then it saunters off. Did that bear just telepathically communicate with her? What’s the deal with the wildlife in this neck of the woods? Your guess is as good as mine.

Autumn regales Billy with a story about a young astrologer who walked the land gazing up at the sky. One day the astrologer tripped and fell into a well. His mother found him and said, “How do you expect to know what’s in the heavens if you can’t see what’s at your feet?” When her story concludes, they’re standing at the foot of the hole. Now Billy knows exactly why his dad was so focused on the Abbotts’ west pasture. 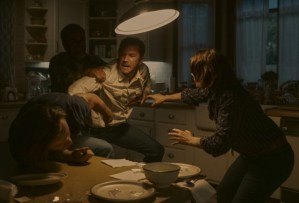 Autumn calls that mysterious someone once again. He or she has one job, she says, and that’s to send her money when she needs it. She demands to see whoever-it-is right now. Then she gets a motel room and continues carving that strange symbol into her skin.

Later at the diner, Autumn speculates to Perry that Royal killed Trevor. He’s been angry and crazy, but maybe he just snapped. “This is the new beginning, and the very best thing to do would be to go to the sheriff and tell her everything,” she says. “Royal killed Trevor. I saw him dispose of the body. So either you can do it or I will!” Perry quiets her down, and promises to take care of it. Later, we see Perry enter the sheriff’s office.

Perry shows up to dinner that night and says he left the sheriff a letter confessing everything. Everyone else is off the hook. Rhett immediately starts smashing dishes and accosting his brother. “It’s no wonder Rebecca left you, you selfish piece of s–t!” he yells. “You’re the reason Amy doesn’t have a f–king mom!” Now Perry’s the one on the attack, and a full-on brawl breaks out. Then Perry holds a knife to his own body and tells Rhett to push it in. He says he did it to protect Royal. Autumn was going to go to the police because she saw him with the body. Royal then gets enraged, grabbing Perry and slamming him into the cabinetry. Glass flies and cuts Amy in the forehead, and the girl runs outside to cry.

Is Perry going away for good? And when will Royal finally come clean to his family? Tell us all your thoughts and theories in the Comments!