The following contains spoilers from Season 2, Episode 4 of HBO Max’s The Flight Attendant.

As the fourth episode of The Flight Attendant Season 2 got underway, Cassie and Megan soon found themselves in the crosshairs of a killer — only to get saved by an equally lethal, but familiar, assassin.

Heading into Episode 4, Cassie (played by Kaley Cuoco) had backburnered the other dramas in her life in order to track down MIA Megan (Rosie Perez) in Reykjavik, Iceland, where the Long Island native now works at a watering hole called Blue Sincerely. Cassie arrived quite proud of having cracked the emoji code Megan texted her son, which she believed to read “bring the puffin keychain to the Queen of Long Island.”

In actuality, though, Megan wanted said keychain (which opens a lockbox containing evidence against the North Koreans that are out to get her) as far away from Iceland as possible; her coded message was intended to get the key delivered to a stripper pal in Long Island. 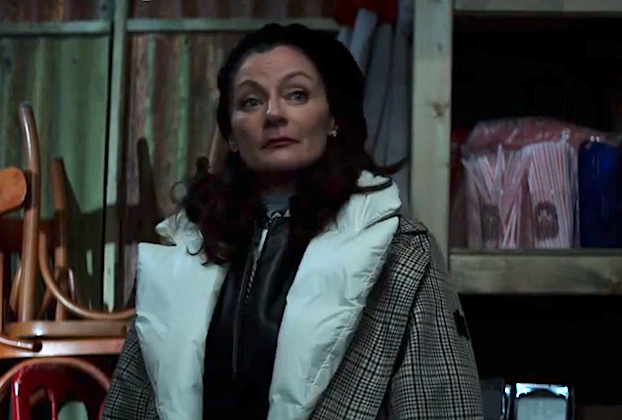 And yet here we are.

Megan introduced Cassie to her partner(/partner?) Charlie (played by Margaret Cho), before detailing their scheme to “K-I-L-L” Hak, a North Korean chasing the bounty on Megan’s head. But when Hak showed up at the bar while Cassie and Megan hid in the back, whose obnoxious ringtone goes off but Cassie’s! Hak then rushed over to the back room and aimed his gun at the ladies, but before he could pull the trigger he was stabbed in the back — by Miranda Croft, the assassin who dogged Cassie in Season 1 and is so deliciously played by Michelle Gomez.

“Sorry if that was a friend of yours,” Miranda sniffed, as Hak slumped to the floor. “Anywho…. Miss me?”

Best of all, Gomez’s reappearance came just before the opening credits could flash the guest star’s name on the screen.

“Michelle was excited to come back,” co-showrunner Steve Yockey told TVLine. “We wanted it to be a surprise, which is why she comes into the picture right before the opening credits, so that we can then put her name in and not spoil it.”

Gomez’s return was hoped for but never officially announced ahead of Season 2. What’s more, the actress had been busy shooting a role for Season 3 of HBO Max’s Doom Patrol. “She was done shooting Doom Patrol at the time, so we snagged her and she dropped right back into the character,” said Yockey. “I think that we were lucky to get her back.”

“Miranda returning, my sister returning — and we got to be together in Iceland! — it was just fantastic,” Kaley gushed to TVLine.  “We knew we wanted Michelle’s character back, because she was so, so good in Season 1 — so funny and out of the box. When she says [to Cassie and Megan], “Did you miss me?’ I loved that.”

Were you similarly thrilled to see Miranda resurface to save the day?